Justin’s First Apology contains the longest extant description of an early Christian meal. This description (ch. 65-67) poses several problems, of which this short article singles out only two. On the level of textual criticism, an oft-discussed variant, rejected in all editions, suggests that the blessing is made over a cup of water, not wine. On the level of liturgical history, Justin’s Eucharist seems to contradict the view that early Christian meals resembled Graeco-Roman symposia. By combining the textual and the historical approach, this article offers a compromise. It is argued that water and not wine was indeed used during the opening ritual, but that the rest of the event did unfold as a symposium and hence included wine.

Narratives in Motion: the Art of Dancing Stories in Antiquity and Beyond
Author: Laura Gianvittorio-Ungar

The purpose of the symposium “Narratives in Motion. The Art of Dancing Stories in Antiquity and Beyond” was to make original contributions to the thriving field of study on ancient Greek and Roman dance by tackling this issue from an angle which is both specific in that it narrows down the focus on dance narrativity across different performance genres, and inclusive in that it encompasses transcultural, transhistorical and practice-based approaches. With eleven talks by classical and dance scholars and two performances by dance artists, the symposium was able to shed light on a range of practices, genres and cultural aspects relating to narrative dance in the ancient and, to a lesser degree, modern world. The event took place on 22-23 June 2018 at the Department of Classics of the University of Vienna, and was sponsored by the FWF-Austrian Science Fund (Project V442-G25 “Aischylos’ diegetisches Drama”). 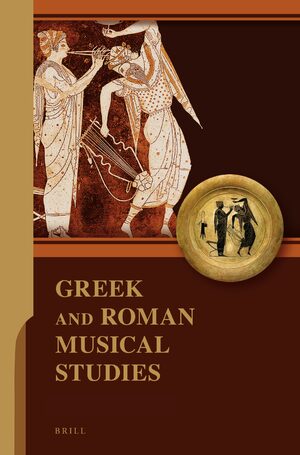 This paper will focus on Plato’s thought-provoking depiction of justice as special kind of harmonia (Resp. 4.443c-444a) that epitomises the best possible organisation of the soul, exploring his nuanced use of the model of lyre tunings in performative, theoretical as well as educational terms. By comparing Plato’s use of harmonic imagery with technical discussions of lyre tunings and their key role in educational settings, I will show how Plato exploited distinctive features of traditional Greek lyre harmoniai to give shape to his innovative understanding of the structure of the soul and the harmonious, but not strifeless, relationship between its individual components. In the second part of this paper, I will look at how the model outlined in the Republic sheds light on the musical structure that gives shape to the World Soul in the Timaeus, advancing a new interpretation of its elusive harmonic organisation.

Part 1 Anchoring the Apostle: the Volume and Its Concept

Part 2 Anchoring the Authority of Peter

Part 4 Anchoring the Cult of Peter

The liturgical cult of Peter, key apostle and one of the most prominent saints on the Latin calendar, is a complex development due to the multiple feasts that came into existence in the earliest centuries of Christianity, the many regions in which these feasts were celebrated in different ways, and, not in the least, the plurality of sources that inspired and influenced the liturgical material of prayers and chants. The aim of this study is to analyse the main Latin liturgical traditions around Peter as they originated in late Antiquity and the early Middle Ages. A special focus will be on the sources that were used to give expression to Peter’s key role in the foundation of the Church in Rome and the West. From a fisherman with origins in the Galilean hinterland to the founding saint of the Latin Church firmly seated in the urban setting of Rome itself is a long way. To establish this transition the liturgical composition of Peter’s cult could not rely on biblical sources alone. A variety of sources and themes inspired the portrait of Peter as Rome’s patron saint. Together with Paul, Peter represented the Christian answer to Rome’s veneration of its traditional founders, Romulus and Remus. Together with the other apostles, Peter represented the source from which the Gospel spread throughout the Roman Empire.

Chapter 12 The Architectural Appropriation of the Apostle Peter by the Early Christian Popes
Author: Kristina Friedrichs

The apostle Peter is the most important saint associated with the city of Rome and provides an interesting frame of reference to articulate ideas, values and political goals of that time. This paper explores how Peter is associated with ecclesiastical architecture in Rome and the suburbs of Rome, through processes of appropriation between the 3rd and 6th centuries. This development, far from being linear, is closely linked to the principle of anchoring innovation. The traceable development illustrates how Peter himself became an anchor to introduce numerous innovations in various situations. The focus of this paper is to verify the concepts of anchoring and appropriation through the lens of architecture, mainly using the examples of Old St Peter’s in the Vatican and the Basilica Apostolorum, now known as San Sebastiano fuori le mura.

Chapter 5 Attitudes to Jewish and Roman Power in the Gospel and Acts of Peter
Author: Markus Bockmuehl

Second-century Christianity singled out Peter in order to identify itself with the apostolic gospel tradition in the face of perceived, and intermittently real, hostility from Romans and Jews. The apocryphal Gospel and Acts of Peter exemplify a tendency to seek analogies with the apostolic generation’s protagonists to make sense of present experiences such enmity. These texts do mobilize Peter in the service of a process of legitimation, but this is the legitimation not of institutional power but of a community – a minority experiencing at least perceived harassment and, at certain times and places, acute existential danger. Concern about power exists, too, but for these early writings this consistently privileges the superior power of God and of Jesus over human or demonic agents. Some such texts did in time come to tolerate a different narrative of inevitable Petrine triumph and the acquisition of papal power – though only ex post facto and in light of the Constantinian turn.