Global Religious and Secular Dynamics offers a global historical perspective that integrates European theories of modern secularization and competing theories of global religious revival as interrelated dynamics. In the first section Casanova examines the emergence of the modern religious/secular binary system of classification within a critical review of Émile Durkheim’s and Max Weber’s divergent theories of religion. The modern system of classification is contrasted with the pre-axial one, in which all reality was organized according to the binary sacred/profane, and with the post-axial one, which was organized according to the binary transcendent/immanent.

The second and third sections contrast the internal European road of secularization without religious pluralization with the external colonial road of global intercultural and religious encounters, particularly in Asia, that led to the global system of religious pluralism. The final section examines the contemporary intertwinement of religious and secular dynamics through the globalization of the immanent frame and the expansion of global denominationalism. 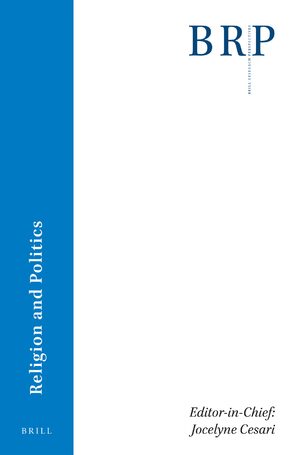 In: Brill Research Perspectives in Religion and Politics

Adapting Dynamically to Change in Diplomacy: A Comparative Look at Special Envoys in the International Arena
Author: Francesco Morini

This article provides a comparative overview of the main features of special envoys/representatives dispatched by major foreign-policy players. It underlines the relevance of this instrument within a fast-changing diplomatic environment, characterized by increasingly numerous actors, evolving practices and complex processes that require a flexible approach. The analysis draws on nearly 650 cases of special envoys appointed by national administrations and international organizations over the span of 25 years, exposing commonalities and differences in the use of a long-standing diplomatic tool. The article argues that the incremental employment of ad-hoc envoys, mandated to deal with issues of a geographical or thematic nature, signals the ambition of individual actors to achieve specific policy objectives on a crowded global stage. In this perspective, and in keeping with their role of precursors in diplomatic practice, special envoys constitute a versatile resource with boundless potential in terms of adaptation to an ever-expanding diplomatic agenda.

This article explores the nature of city diplomacy using newly available archives chronicling the ‘municipal foreign policy movement’ of the 1980s, in which US city governments intervened directly in late Cold War foreign affairs issues. Cases covered include US city governments’ involvement in the nuclear free zone movement, the Central American crisis and the anti-Apartheid movement throughout the 1980s. A theoretical synthesis of literature in world society theory, diplomatic studies and social movement theory is used to explain the normative, macro-sociological, legal, democratic and sociopolitical dynamics of contentious city-government intervention in foreign affairs. Emphasizing the normative processes at play, this article argues through a world society theoretical interpretation that ‘municipal foreign policy’ efforts represent local-level codification of universal norms that the US federal government either neglected to enforce or directly violated.

The article explores the Apollo–Soyuz Test Project (ASTP) of 1975, the first joint US–USSR space flight, which was embedded in the wider political, ideological and cultural contexts of the Cold War. The ASTP can be viewed through the lens of science diplomacy (SD). The data, drawn from available sources and memoirs, highlights the phenomenological approach in people-to-people interaction to analyse paths, processes and timeline dependence in such cooperation. The Weberian model of generalization and the path dependency theory of constructing an ideal type were used as the study’s theoretical frameworks. An ideal type of SD is viewed not as universal, but as a heuristic device that can be contrasted and compared with other recognized cases of SD. The significance of utilizing an ideal type of SD is to maintain mechanisms and networks effectively between countries through science and technology-related joint projects when political relations are strained or limited.

Business diplomacy emphasizes engagement with stakeholders to shape the environment to favour business interests. This article recognizes that multinational corporations (MNCs) play a relevant role in the international arena, dealing with governments and other non-state actors by means of business diplomacy. Biotechnology companies, in particular, bargain with government representatives for commercialization, deregulation or intellectual property enforcement. In order to advance their economic and business goals, biotechnology companies have implemented reactive, proactive and relationship-building strategies and instruments. These MNCs have applied reactive instruments to respond to evolving problems and proactive instruments to address more complex issues. MNCs have also employed long-term relationship-building instruments, such as awards and research centres, to establish stronger relationships with multiple stakeholders. This article contributes to the discussion of what business diplomacy is and presents an analysis of strategies and instruments that is scarce in the business diplomacy literature.

Back-channel diplomacy allows participants to hold dialogues with actors with whom they are not prepared to talk openly. The secrecy of back channels can, however, permit a small elite to escape oversight and scrutiny to achieve unaccountable aims. This article examines the ethical dilemmas raised by the secrecy of back channels. It seeks to develop some practical ‘tests’ that can be used to ask whether a back channel is straying, or has strayed, into dangerous ethical territory. The article advances three such tests for further development, but also concludes that they cannot be ‘absolute’; the context in which a back channel operates is the key variable.

The Material Body of Diplomacy and the Power of Interpersonal Communications
Author: Olga Krasnyak

In the soft-power context, health is increasingly seen as an area that generates particular diplomatic benefits, because it is ostensibly non-political and can bring both immediate and long-term advantages to the donor and the recipient country equally. The endeavours of individual member states of the European Union (EU) and the input of the EU itself in Central Asia are examined to see the extent to which the initiatives in health-related areas form part of a wider diplomatic strategy and whether their effectiveness is related to the means by which the planned improved health outcomes are achieved. This article seeks to draw lessons from the European experience to increase understanding of the role of health in global diplomacy.