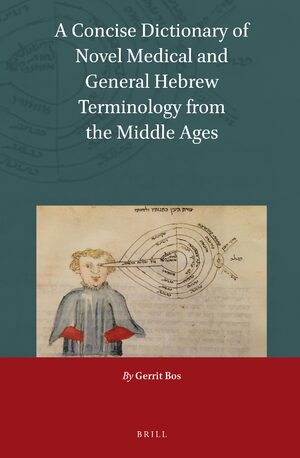 A Concise Dictionary of Novel Medical and General Hebrew Terminology from the Middle Ages
Author: Gerrit Bos
The terminology in medieval Hebrew medical literature (original works and translations) has been sorely neglected by modern research. Medical terminology is virtually missing from the standard dictionaries of the Hebrew language, including Ha-Millon he-ḥadash, composed by Abraham Even-Shoshan. Ben-Yehuda’s dictionary is the only one that contains a significant number of medical terms. Unfortunately, Ben-Yehuda’s use of the medieval medical texts listed in the dictionary’s introduction is inconsistent at best. The only dictionary exclusively devoted to medical terms, both medieval and modern, is that by A.M. Masie, entitled Dictionary of Medicine and Allied Sciences. However, like the dictionary by Ben-Yehuda, it only makes occasional use of the sources registered in the introduction and only rarely differentiates between the various medieval translators. Further, since Masie’s work is alphabetized according to the Latin or English term, it cannot be consulted for Hebrew terms. The Historical Dictionary of the Hebrew Language, which is currently being created by the Academy of the Hebrew Language, has not been taken into account consistently as it is not a dictionary in the proper sense of the word. Moreover, consultation of this resource suggests that it is generally deficient in medieval medical terminology. The Bar Ilan Responsa Project has also been excluded as a source, despite the fact that it contains a larger number of medieval medical terms than the Historical Dictionary. The present dictionary has two major objectives: 1) to map the medical terminology featured in medieval Hebrew medical works, in order to facilitate study of medical terms, especially those terms that do not appear in the existing dictionaries, and terms that are inadequately represented. 2) to identify the medical terminology used by specific authors and translators, to enable the identification of anonymous medical material.
E-Book 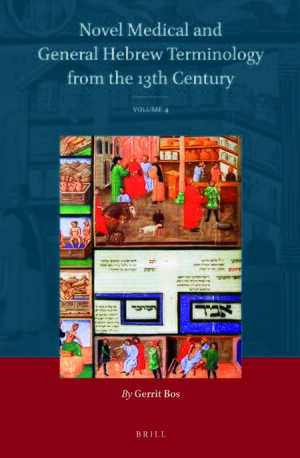 Novel Medical and General Hebrew Terminology from the 13th Century
Volume 4
Author: Gerrit Bos
This volume is part of a wider project aiming at mapping the technical medical terminology as it features in medieval Hebrew medical works, especially those terms that do not feature in the current dictionaries at all, or insufficiently. In this way the author hopes to facilitate the consultation of these and other medical works and the identification of anonymous medical material. The terminology discussed in this volume has been derived from three primary and seven secondary sources. The primary sources are: (1) Sefer Ṣedat ha-Derakhim – Moses Ibn Tibbon’s translation of Ibn al-Jazzār’s Zād al-musāfir, bks. 1–2; (2) Sefer ha-Shimmush – Shem Tov Ben Isaac’s Hebrew translation of al-Zahrāwī’s Kitāb al-taṣrīf; (3) Sefer ha-Qanun – Nathan ha-Meʾati’s Hebrew translation of the first book of Ibn Sīnā’s K. al-Qānūn.
E-Book