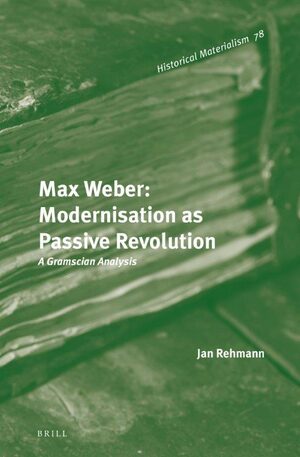 Max Weber: Modernisation as Passive Revolution
A Gramscian Analysis
Series: Historical Materialism Book Series, Volume: 78
Author: Jan Rehmann
Basing his research on Gramsci’s theory of hegemony, Rehmann provides a comprehensive socio-analysis of Max Weber’s political and intellectual position in the ideological network of his time. Max Weber: Modernisation as Passive Revolution shows that, even though Weber presents his science as ‘value-free’, he is best understood as an organic intellectual of the bourgeoisie, who has the mission of providing his class with an intense ethico-political education. Viewed as a whole, his writings present a new model for bourgeois hegemony in the transition to ‘Fordism’. Weber is both a sharp critic of a ‘passive revolution’ in Germany tying the bourgeois class to the interests of the agrarian class, and a proponent of a more modern version of passive revolution, which would foreclose a socialist revolution by the construction of an industrial bloc consisting of the bourgeoisie and labour aristocracy.