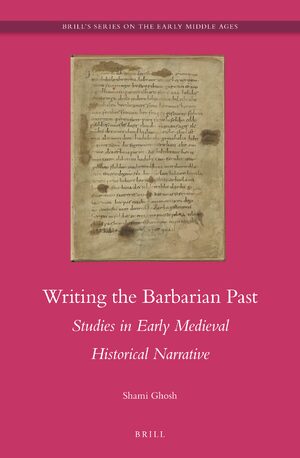 Writing the Barbarian Past: Studies in Early Medieval Historical Narrative
Series: Brill's Series on the Early Middle Ages, Volume: 24
Author: Shami Ghosh
Writing the Barbarian Past examines the presentation of the non-Roman, pre-Christian past in Latin and vernacular historical narratives composed between c.550 and c.1000: the Gothic histories of Jordanes and Isidore of Seville, the Fredegar chronicle, the Liber Historiae Francorum, Paul the Deacon’s Historia Langobardorum, Waltharius, and Beowulf; it also examines the evidence for an oral vernacular tradition of historical narrative in this period.
In this book, Shami Ghosh analyses the relative significance granted to the Roman and non-Roman inheritances in narratives of the distant past, and what the use of this past reveals about the historical consciousness of early medieval elites, and demonstrates that for them, cultural identity was conceived of in less binary terms than in most modern scholarship.