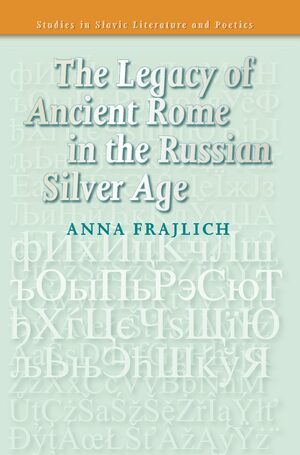 The Legacy of Ancient Rome in the Russian Silver Age
Series: Studies in Slavic Literature and Poetics, Volume: 48and Studies in Slavic Literature and Poetics Online, Volume: 48
Author: Anna Frajlich
For poets throughout the world Rome was the world. This is particularly true for Russian poets, owing to the anagrammatical relation of the words Rome and mir (Rome and world). The legacy of ancient Rome has always constituted an important component of the Russian cultural consciousness. The revitalization of classical scholarship in nineteenth-century Russia and new approaches to antiquity prompted many of the Russian Symbolists to seek their inspiration in ancient Rome. Vladimir Solovyov, Dmitry Merezhkovsky, Valery Bryusov, Vyacheslav Ivanov, Maksimilian Voloshin, Vasily Komarovsky, and Mikhail Kuzmin all made significant contributions to what is often referred to as the “Roman text.” The Legacy of Ancient Rome in the Russian Silver Age analyzes the forms involved in creating the Roman image and explores its functionality within the given poetic system. In addition to the formal analysis, the background and the stimulus leading up to the composition of a particular poem are explored, as well as allusions to legends, myths and Rome’s geography and architecture. Moreover, this study considers the function of the Roman text in Russian Symbolist poetics and the works of the individual poets. Finally, the relation between the Roman and Petersburg texts of Russian literature is explored, since many of the Russian Symbolist poets found in Rome a perfect metaphor for their studies of the city and “urban” poetry.
E-Book (PDF)