Handbook of Hinduism in Europe (2 vols)
Series: Handbook of Oriental Studies. Section 2 South Asia, Volume: 35
Editors: Knut A. Jacobsen and Ferdinando Sardella
Handbook of Hinduism in Europe portrays and analyses how Hindu traditions have expanded across the continent, and presents the main Hindu communities, religious groups, forms, practices and teachings. The Handbook does this in two parts, Part One covers historical and thematic topics which are of importance for understanding Hinduism in Europe as a whole and Part Two have articles on Hindu traditions in every country in Europe. Hindu traditions have a long history of interaction with Europe, but the developments during the last fifty years represent a new phase. Globalization and increased ease of communication have led to the presence of a great plurality of Hindu traditions. Hinduism has become one of the major religions in Europe and is present in every country of the continent.
E-Book 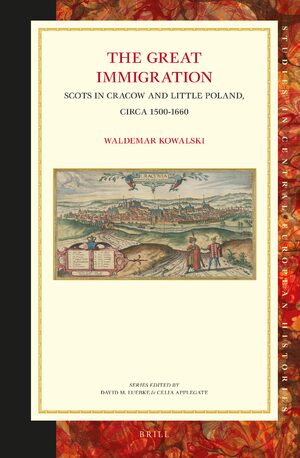 The Great Immigration: Scots in Cracow and Little Poland, circa 1500-1660
Series: Studies in Central European Histories, Volume: 63
Author: Waldemar Kowalski
In the second half of the sixteenth century, Scottish immigrants to Little Poland became a visible ethnic minority in numerous towns of that province and particularly in its capital, Cracow. This is the first study to examine this urbanized immigration in the period until the 1660s, when Poland–Lithuania, devastated by the mid-century Swedish invasion, was no longer an attractive migrant destination. From around the 1570s, affluent Scottish merchants developed intense commercial relations in central Europe, while peddlers of that nationality distributed so-called ‘Scotch goods’ at local markets.
The majority of Scots participated in the life of local Evangelical congregations and suffered religious persecutions together with their co-religionists. This prompted their collaboration with the Swedish occupants against their Catholic neighbors.
E-Book