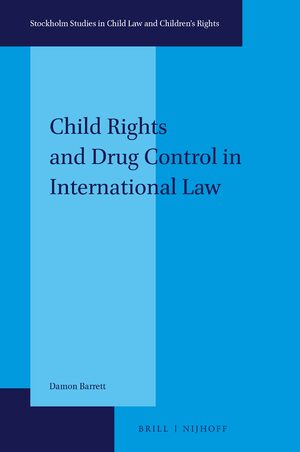 Child Rights and Drug Control in International Law
Series: Stockholm Studies in Child Law and Children’s Rights, Volume: 6
Author: Damon Barrett
Responding to the harms caused by drugs is one of the most challenging social policy issues of our time. In Child Rights and Drug Control on International Law, Damon Barrett explores the meaning of the child’s right to protection from drugs under the Convention on the Rights of the Child, and the relationship between this right and the UN drug control conventions. Adopting a critical approach, the book traces the intersecting histories of the treaties, the role of child rights in global drug policy discourse, and the practice of the Committee on the Rights of the Child. It invites us to reflect upon the potential for child rights to provide justification for state actions associated with wider human rights risks.
E-Book (PDF)

Children on the Move
How to Implement Their Right to Family Life
Editors: Jaap Doek, Hans van Loon and Paul Vlaardingerbroek
Increasing numbers of children are on the move throughout the world: moving or migrating, alone or accompanied. This gives rise to many new problems with legal, economic, social and cultural aspects, calling for new approaches based on a world-wide perspective. The international mobility of children poses a special challenge for the protection of their family environment, as guaranteed by the United Nations Convention on the Rights of the Child and other international instruments.
Children on the Move contains the texts and speeches given and the papers presented at the international conference of the same title, which took place at the Hague, the Netherlands, 23-26 October 1994. The conference was one of the major contributions of the Netherlands to the UN International Year of the Family and was convened by the Netherlands Committee for the International Year of the Family in collaboration with the Hague Conference on Private International Law.
Children on the Move provides the reader with an in-depth analysis of the various legal aspects (problems and remedies) of inter-country adoption, international child abduction, and children as international refugees.
Hardback

Conceiving the Embryo
Ethics, Law and Practice in Human Embryology
Editors: Donald Evans and Neil Pickering
This volume of essays, together with its companion Creating the Child: The Ethics, Law and Practice of Assisted Procreation (Martinus Nijhoff, The Hague, 1996, ISBN 90-411-0207-8) is the result of a concerted action in the BIOMED programme of the European Commission, which was coordinated by the Editor. Clinicians, lawyers and philosophers explore the theoretical and practical problems presented by the new technologies in assisted human reproduction in Eastern, Central and Western Europe. The central question of the status of the human embryo is examined in the light of recent biological discoveries and cultural and legal dissonance within and between the various countries in Europe.
Hardback

Creating the Child
The Ethics, Law and Practice of Assisted Procreation
Editors: Donald Evans and Neil Pickering
This volume of essays, together with its companion Conceiving the Embryo: Ethics, Law and Practice in Human Embryology (Martinus Nijhoff, The Hague, 1996, ISBN 90-411-0208-6) is the result of a concerted action in the BIOMED programme of the European Commission, which was coordinated by the Editor. Clinicians, lawyers and philosophers explore the theoretical and practical problems presented by the new technologies in assisted human reproduction in Eastern, Central and Western Europe. The essays reveal considerable dissonance in existing and proposed legislation, both within and between European countries, and examine the rights of parents and children involved in these new procedures.
Hardback

The Decline of Infant and Child Mortality
The European Experience: 1750-1990
Editors: Carlo A. Corsini and Pier Paolo Viazzo
Of the many changes that have taken place in Western society during the past two centuries, few have been more significant than the steep fall in infant and child mortality. However, the timing and causes of the decline are still poorly understood. While some scholars attribute it to general improvements in living standards, others emphasize the role of social intervention and public health reforms. Written by specialists from several disciplinary fields, the twelve essays in this book break entirely new ground by providing a long-term perspective that challenges some deep-rooted ideas about the European experience of mortality decline and may help explain the forces and causal relationships behind the still tragic incidence of preventable infant and child deaths in many parts of the world today. This book will become a standard work for students and researchers in demography, social and economic history, population geography, and the history of medicine, and it will be of interest to anyone concerned with current debates on the policies to be adopted to curb infant and child mortality in both developed and developing countries.
Hardback

The book is a collection of essays that are divided into four sections: Background (covering treaties, -- such as the Convention on the Rights of the Child , national legislation and tribal law); Important Indigenous Child Issues,(including cultural identity, land rights and health); Regional Indigenous Child Issues (which includes chapters about the issues concerning indigenous children in specific geographic areas, such as Alaska and Venezuela ); and Voices of Youth (with essays by indigenous young people who give their views about their present circumstances and hopes for the future),

The book’s authors are all recognized authorities on indigenous issues and children’s rights and include such luminaries as Jaap Doek (Chairperson of the Committee on the Rights of the Child – which monitors the UN Convention on the Rights of the Child) and Wilton Littlechild (Rapporteur for the UN Permanent Forum on Indigenous Issues). The editors, Cynthia Price Cohen and Philip Cook have been at the forefront of the indigenous child rights movement and are recognized authorities on Indigenous children’s rights.

Developing Rights of Indigenous Children is timely, informative and fascinating, a must-read for anyone interested in knowing more about indigenous issues and indigenous children in particular. 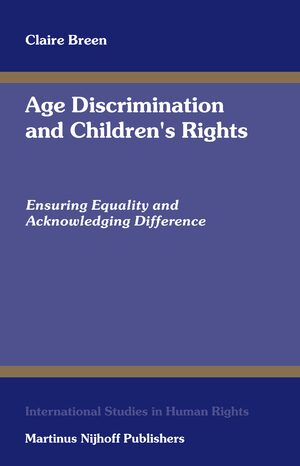 Age Discrimination and Children's Rights
Series: International Studies in Human Rights, Volume: 86
Author: Claire Breen
One of the aims of the United Nations Convention on the Rights of the Child is to accord due recognition to the fact that 'the child, by reason of his phsyical and mental immaturity, needs special safeguards and care, including appropriate legal protection, before as well as after birth'.
However, a question mark hangs over the extent to which 'special safeguards and care' can negatively impact on the rights of the child and result in discrimination against the child in the guise of 'his physical and mental immaturity'. This volume explores the extent to which children's rights are secured at the national level; and the reasons why children's rights have or have not been recognised and secured by various states at the level of domestic law. It also explores the difficulties inherent in the accordance of rights to children in order to ascertain whether they do in fact derive from the particular nature of children or whether they mask a reluctance of states to fulfil their domestic and international rights obligations to children, and whether such reluctance constitutes 'discrimination against children'. The volume thus explores the theoretical and legal underpinnings of gender and race discrimination, at both the domestic and international level, and examines the extent to which these may be applied to the area of children's rights.
E-Book (PDF) 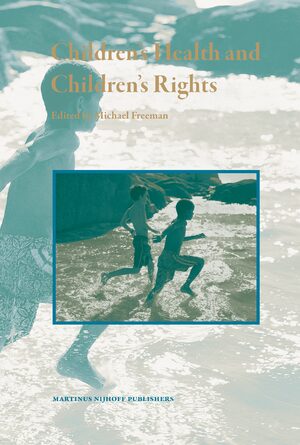 Children's Health and Children's Rights
Editor: Michael Freeman
This collection offers a series of essays highlighting many of the most controversial of contemporary issues relating to children, medicine and health care including the participation rights of children, genetic testing, male circumcision, organ donation, gender reassignment, the rights of autistic children, anorexia nervosa. Essays are written by a range of leading scholars across a range of disciplines. A number of the essays in this collection were previously published in the International Journal of Children's Rights.
E-Book (PDF)