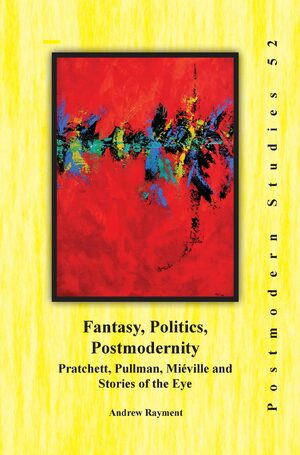 Fantasy, Politics, Postmodernity
Pratchett, Pullman, Miéville and Stories of the Eye
Series: Postmodern Studies, Volume: 52
Author: Andrew Rayment
“The books are true while reality is lying…” Championing the popular Fantasy genre on the same terms as its readers, Rayment casts a critical eye over the substance and methods of political critique in the Fantasy novels of Terry Pratchett, Philip Pullman and China Miéville. Ranging across subjects as diverse as exquisite fundamentalism and revolutionary trains, encountering pervert-priests, dwarf hermaphrodites and sex-scarred lovers and pondering the homicidal tendencies of fairy tales and opera, Fantasy, Politics, Postmodernity develops a theoretically wide-ranging and illuminating account of how the novels of these writers do and do not sustain politically insightful critique of the real world, while bringing intellectual and ethical concerns to bear on the popular Fantasy form.
E-Book (PDF) 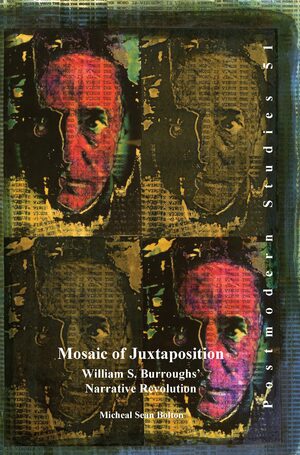 Mosaic of Juxtaposition
William S. Burroughs’ Narrative Revolution
Series: Postmodern Studies, Volume: 51
Author: Micheal Sean Bolton
William S. Burroughs’ experimental narratives, from the 1959 publication of Naked Lunch through the late trilogy of the 1980s, have provided readers with intriguing challenges and, for some, disheartening frustrations. Yet, these novels continue to generate new interest and inspire new insights among an increasing and evolving readership. This book addresses the unique characteristics of Burroughs’ narrative style in order to discover strategies for engaging and navigating these demanding novels. Bolton advises, “Burroughs’ subversive themes and randomizing techniques do not amount to unmitigated attacks on conventions, as many critics suggest, but constitute part of a careful strategy for effecting transformations in his readers”. Utilizing various poststructuralist theories, as well as recent theories in electronic literature and posthumanism, Mosaic of Juxtaposition examines the various strategies that Burroughs employs to challenge assumptions about textual interpretation and to redefine the relationship between reader and text.
E-Book (PDF) 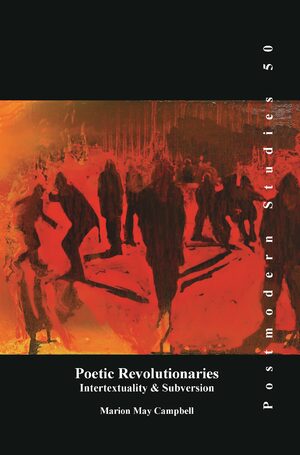 Poetic Revolutionaries
Intertextuality & Subversion
Series: Postmodern Studies, Volume: 50
Author: Marion May Campbell
Poetic Revolutionaries is an exploration of the relationship between radical textual practice, social critique and subversion. From an introduction considering recent debates regarding the cultural politics of intertextuality allied to avant-garde practice, the study proceeds to an exploration of texts by a range of writers for whom formal and poetic experimentation is allied to a subversive politics: Jean Genet, Monique Wittig, Angela Carter, Kathy Acker, Kathleen Mary Fallon, Kim Scott and Brian Castro. Drawing on theories of avant-garde practice, intertextuality, parody, representation, and performance such as those of Mikhaïl Bakhtin, Julia Kristeva, Gérard Genette, Margaret A. Rose, Linda Hutcheon, Fredric Jameson, Ross Chambers and Judith Butler, these readings explore how a confluence of writing strategies – covering the structural, narratological, stylistic and scenographic – can work to boost a text’s subversive power.
E-Book (PDF) 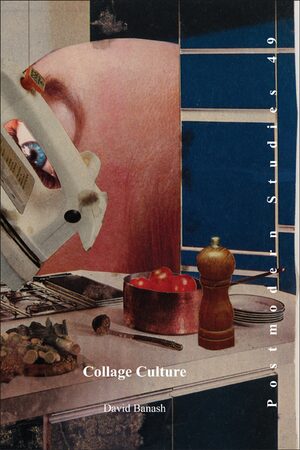 Collage Culture
Readymades, Meaning, and the Age of Consumption
Series: Postmodern Studies, Volume: 49
Author: David Banash
Collage Culture develops a comprehensive theory of the origins and meanings of collage and readymades in modern and postmodern art, literature, and everyday life. Demonstrating that the origins of collage are found in assembly line technologies and mass media forms of layout and advertising in early twentieth-century newspapers, Collage Culture traces how the historical avant-garde turns the fragmentation of Fordist production against nationalist, fascist, and capitalist ideologies, using the radical potential unleashed by new technologies to produce critical collages. David Banash adeptly surveys the reinvention of collage by a generation of postmodern artists who develop new forms including cut-ups, sampling, zines, plagiarism, and copying to cope with the banalities and demands of consumer culture. Banash argues that collage mirrors the profoundly dialectical relations between the cut of assembly lines and the readymades of consumerism even as its cutting-edges move against the imperatives of passive consumption and disposability instituted by those technologies, forms, and relations. Collage Culture surveys and analyzes works of advertising, assemblage, film, literature, music, painting, and photography from the historical avant-garde to the most recent developments of postmodernism.
E-Book (PDF) 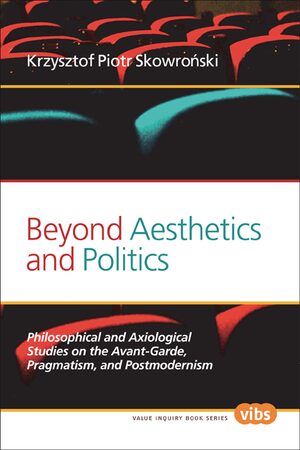 Beyond Aesthetics and Politics
Philosophical and Axiological Studies on the Avant-Garde, Pragmatism, and Postmodernism
Series: Value Inquiry Book Series, Volume: 264and Central European Value Studies, Volume: 264
Author: Krzysztof Piotr Skowroński
The book presents five philosophical and axiological studies devoted to the relationship between aesthetics and politics. It shows this relationship throughout the works of some avant-gardists, pragmatists, and postmodernists. It is also a voice in the discussion about the meaning of the fine arts and aesthetics in the context of the political aims and norms. This voice claims that the political dimension of art and aesthetics should be studied much more seriously than it has been till today, and needs more courageous re-interpretations and re-readings.
E-Book (PDF) 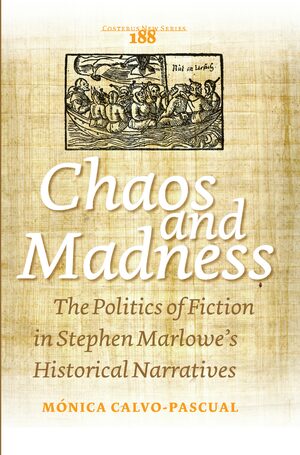 Chaos and Madness
The Politics of Fiction in Stephen Marlowe’s Historical Narratives
Series: Costerus New Series Online, Volume: 188and Costerus New Series, Volume: 188
Author: Mónica Calvo-Pascual
In the 1950s prolific U.S. fiction writer Stephen Marlowe became a cult author for lovers of noir fiction mainly for his Drumbeat series, which present his best-known character: private eye Chester Drum. Yet, the academia never paid much attention to his multifaceted, extensive oeuvre. Chaos and Madness is the first volume offering a critical approach to Marlowe’s riveting historical novels. Their relevance in the field of literary studies derives from their well-wrought structure and captivating prose as well as from their portrayal of remote European history – a distinctive feature that makes Marlowe a unique figure in the North American trend of historiographic metafiction.
Chaos and Madness provides a comprehensive narratological and ideological analysis of three novels in which Marlowe deals with Spanish history. Preceded by an in-depth if reader-friendly theoretical chapter that traces the evolution of the historical novel as a genre, Calvo-Pascual’s meticulous investigation into Marlowe’s fiction proves compelling for anyone interested in contemporary American fiction, in Spanish history, or in the interaction of metafiction and the scientific discourse of chaos theory.
E-Book (PDF) 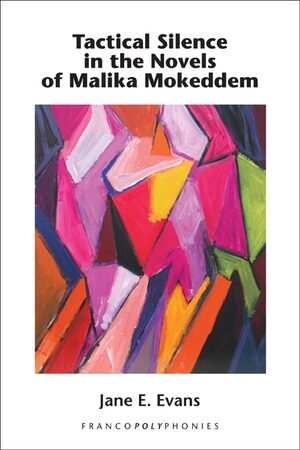 Tactical Silence in the Novels of Malika Mokeddem
Series: Francopolyphonies, Volume: 9
Author: Jane E. Evans
Tactical Silence in the Novels of Malika Mokeddem, an inquiry into how silence may be used to challenge a gender-differentiated power system, relies on Michel de Certeau’s model of strategies and tactics applied to a postcolonial assessment of both Algerian literature in French as well as Algerian women’s stereotyped silence. This book analyzes the relationship between tactical silence and freedom in the lives of Mokeddem’s female protagonists in all her novels, published between 1990 and 2008. The notion of deliberate silence also lends itself to a discussion of the reader’s efforts in comprehending Mokeddem’s textual silences as well as her exclusion of certain topics from her writings.
E-Book (PDF) 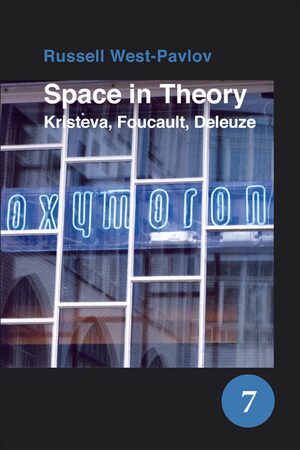 Space in Theory
Kristeva, Foucault, Deleuze
Series: Spatial Practices, Volume: 7
Author: Russell West-Pavlov
Space in Theory: Kristeva, Foucault, Deleuze seeks to give a detailed but succinct overview of the role of spatial reflection in three of the most influential French critical thinkers of recent decades. It proposes a step-by-step analysis of the changing place of space in their theories, focussing on the common problematic all three critics address, but highlighting the significant differences between them. It aims to rectify an unaccountable absence of detailed analysis to the significance of space in their work up until now.
Space in Theory argues that Kristeva, Foucault and Deleuze address the question: How are meaning and knowledge produced in contemporary society? What makes it possible to speak and think in ways we take for granted? The answer which all three thinkers provide is: space. This space takes various forms: psychic, subjective space in Kristeva, power-knowledge-space in Foucault, and the spaces of life as multiple flows of becoming in Deleuze.
This book alternates between analyses of these thinkers’ theoretical texts, and brief digressions into literary texts by Barrico, de Beauvoir, Beckett, Bodrožić or Bonnefoy, via Borges, Forster, Gide, Gilbert, Glissant, Hall, to Kafka, Ondaatje, Perec, Proust, Sartre, Warner and Woolf. These detours through literature aim to render more concrete and accessible the highly complex conceptulization of contemporary spatial theory.
This volume is aimed at students, postgraduates and researchers interested in the areas of French poststructuralist theory, spatial reflection, or more generally contemporary cultural theory and cultural studies.
E-Book (PDF) 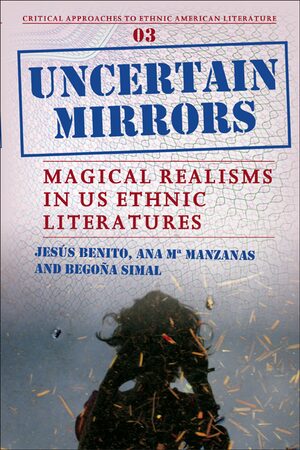 Uncertain Mirrors
Magical Realism in US Ethnic Literatures
Series: Critical Approaches to Ethnic American Literature, Volume: 3
Authors: Jesús Benito, Ana María Manzanas and Begoña Simal
Uncertain Mirrors realigns magical realism within a changing critical landscape, from Aristotelian mimesis to Adorno’s concept of negative dialectics. In between, the volume traverses a vast theoretical arena, from postmodernism and postcolonialism to Lévinasian philosophy and eco-criticism. The volume opens and closes with dialectical instability, as it recasts the mutability of the term “mimesis” as both a “world-reflecting” and a “world-creating” mechanism. Magical realism, the authors contend, offers another stance of the possible; it also situates the reader at a hybrid aesthetic matrix inextricably linked to postcolonial theory, postmodernism, Bakhtinian theory, and quantum physics. As Uncertain Mirrors explores, magical realist texts partake of modernist exhaustion as much as of postmodernist replenishment, yet they stem from a different “location of culture” and “direction of culture;” they offer complex aesthetic artifacts that, in their recreation of alternative geographic and semiotic spaces, dislocate hegemonic texts and ideologies. Their unrealistic excess effects a breach in the totalized unity represented by 19th century realism, and plays the dissonant chord of the particular and the non-identical.
E-Book (PDF) 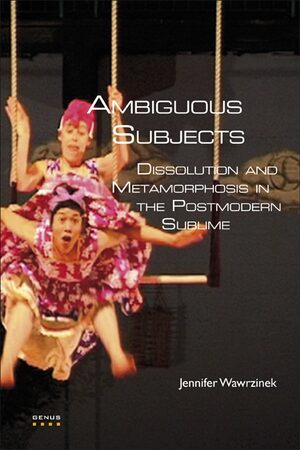 Ambiguous Subjects
Dissolution and Metamorphosis in the Postmodern Sublime
Series: GENUS: Gender in Modern Culture, Volume: 10
Author: Jennifer Wawrzinek
In the history of ideas, the aesthetic categories of the sublime and the grotesque have exerted a powerful force over the cultural imagination. Ambiguous Subjects is one of the first studies to examine the relationship between these concepts. Tracing the history of the sublime from the eighteenth century through Burke and Kant, Wawrzinek illustrates the ways in which the sublime has traditionally been privileged as an inherently masculine and imperialist mode of experience that polices and abjects the grotesque to the margins of acceptable discourse, and the way in which twentieth-century reconfigurations of the sublime increasingly enable the productive situating of these concepts within a dialogic relation as a means of instating an ethical relation to others.
This book examines the articulations of both the sublime and the grotesque in three postmodern texts. Looking at novels by Nicole Brossard and Morgan Yasbincek, and the performance work of The Women’s Circus, Wawrzinek illuminates the ways in which these writers and performers restructure the spatial and temporal parameters of the sublime in order to allow various forms of highly contingent transcendence that always necessarily remain in relation to the grotesque body. Ambiguous Subjects illustrates how the sublime and the grotesque can co-exist in a manner where each depends on and is inflected through the other, thus enabling a notion of individuality and of community as contingent, but nevertheless very real, moments in time.
Ambiguous Subjects is essential reading for anyone interested in aesthetics, continental philosophy, gender studies, literary theory, sociology and politics.
E-Book (PDF)