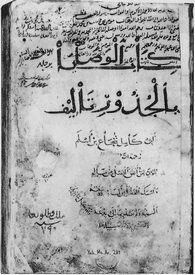 The Professor Yahuda Collection
The well-known orientalist, Prof. Abraham Shalom Yahuda (Jerusalem, 1877 - New Haven, 1951) studied in Heidelberg and Strasbourg, and taught at the Berlin Hochschule, the University of Madrid, and the New School for Social Research in New York. He acquired a valuable collection of manuscripts, particularly Arabic material purchased mainly in Egypt. Parts of his manuscript collection were sold by him to various institutions (see: R. Mach, Catalogue of Arabic MSS (Yahuda Collection) in the Garrett Collection, Princeton 1977, “Introduction”). The Yahuda Collection of the JNUL consists of the manuscripts he kept until his death, which were donated to the JNUL by his family; their importance is in no way inferior to that of the manuscripts he sold.

The collection contains 1,155 manuscripts written in Arabic characters, most of them Arabic and about 10 % of them Persian and Ottoman. A considerable part of the collection consists of multititle codices, which brings the total number of titles in the collection to about 3,000.
Approximately one-third of the manuscripts are medieval, dating from the ninth to the sixteenth century.

The contents of the manuscripts include all areas of Islamic and Arabic sciences and Arabic, Persian and Ottoman literature. Some 400 titles are not listed by Brockelmann or other bibliographical sources, and are thus of great importance for research; for many other titles only single or very few other manuscripts are known, which makes them valuable for textual criticism and critical editions. Of special interest are the medical manuscripts, the majority of which are Persian. A collection of more than 100 Qurans, dating from the ninth to the nineteenth century, vividly illustrates the history of the Quran's calligraphy. A large proportion of the Persian and Ottoman manuscripts are illuminated, and contribute to the history of Persian and Ottoman art.
Microfiche Collection 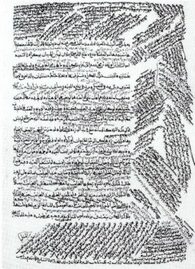 IDC is offering an edition of the collection of Arabic manuscripts held by the Library of the School of Oriental and African Studies, University of London. This collection consists of over 400 items covered by 394 entries, and includes not only such traditional Islamic disciplines as Tafsir, Hadith and Fiqh, but also works on mathematics, astronomy, medicine, falconry, archery and military equitation.
A sizeable proportion of the collection is made up of Shicah literature, with 17 Ismacili manuscripts of Indian provenance. The Shaikhi sect is represented by 37 tracts and responsa of Kazim al-Rashti (no. 277). Among the manuscripts the reader will find some with parallel or interlinear translation into a number of languages such as Coptic (nos. 46, 187), French (no. 376), Italian (no. 29), Malay (nos. 35, 77, 230, 231, 287, 312, 378), Persian (nos. 25, 64, 102, 248, 251, 287, 341), and Swahili (nos. 201, 246, 255). The earliest manuscript in the collection is dated 885 after Christ.

The printed catalogue
The catalogue was compiled by Adam Gacek, formerly of the library of the SOAS and at present librarian of the Institute of Ismaeli Studies in London. The catalogue, published by the SOAS in 1985 (a reprint with corrections from the earlier edition of 1981) (306 pages, 12 ill.), comes with the microfiche edition, but is also available separately from the library of the SOAS.
The entries are arranged alphabetically by title, with references grouped together and directly preceding the letter sequence. The alphabetical order has been adjusted to accommodate the system of transliteration, the additional letters being placed as follows: d, dh, d: g, gh: h, h: k, kh: s, sh, s: t, th, t. (This does not apply to the sequence of letters within a word).
The catalogue has five indexes (subject, person's name, verses, chronological, and numerical).
Microfiche Collection

Collection of reading selections, in English translation, chosen from published and unpublished sources which reflect the chronological, geographical, and linguistic diversity of Islamic societies. Materials included range from pre-Islamic poetry, theology, philosophy, and science of the pre-modern empires to the history, politics, and literature of recent times.
205 text selections.
Microfiche Collection