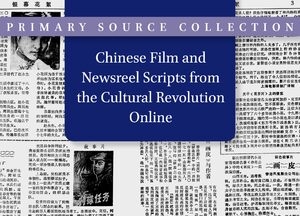 Chinese Film and Newsreel Scripts from the Cultural Revolution Online
• Dates: (inclusive): 1946-1985 • Languages used: Chinese • EAD finding aids are available Produced mostly by the Central Newsreel and Documentary Film Studio of China, documentary films and newsreels were two of the major mass media and communication channels in China from the 1950’s through the 1970’s. They covered all aspects of social activities, though the emphasis was on developments and achievements in the building of a socialist country. In order to reach even broader public audiences, government agents produced and printed the transcripts and shot lists for the films and sent them to cities and rural areas. The bulk of the items in the collection are transcripts for the documentary films and newsreels from the Cultural Revolution, 1966-1976. Few of these printed materials have survived due to the poor quality of the paper upon which they were printed. All documents in the collection are in Chinese. Location of originals: Duke University Library, Durham
Online