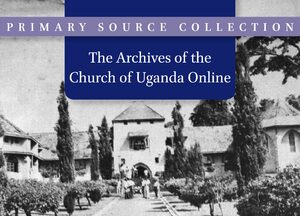 The records in this collection document the history of the Church of the Province of Uganda, including some of the first written documents about and originating from Uganda. It covers the period from the arrival of the first Church Missionary Society missionaries at King Mutesa's court (1877) to the early 1980s. Contents of the collection include legal and administrative documents, correspondence, publications, personal records and more from the Offices of the Archbishops and Bishops of Uganda, the Education Secretary General, the General, Financial, and Provincial Secretaries, the Provincial Treasurer, and the Mother’s Union.

Christianity came to Uganda relatively late compared to many other parts of Africa. The first Church Missionary Society missionaries arrived at King Mutesa's court on 30 June 1877, seventy-eight years after the founding of the Church Missionary Society in Great Britain. However, within eight decades, after having passed through much persecution, Uganda had become one of the most successful mission fields in the world. By 1914, through its indigenous teachers and a few European missionaries, nearly the whole of present-day Uganda had already been evangelized. In 1961 the growth of the Church of Uganda was recognized in the Anglican Communion with the establishment of the Church of the Province of Uganda, Rwanda-Burundi and Boga-Zaire.

This collection is an important source not only for the history of Christianity in Uganda, but also for the political and social development of the country, both before and after its independence.

Content of the collection
1. Office of the Bishop of Uganda – (1882-1961).
These records trace the development of the Church Missionary Society (CMS) Uganda Mission and the Native Anglican Church (NAC) in Uganda, including the Uganda Diocese and the Diocese of the Upper Nile.
2. Education Secretary General – (1936-1964).
These records document the development and operations of the CMS/NAC schools, their governing bodies, and their interaction with the Uganda Protectorate Education Department which regulated education within Uganda.
3. General Secretary – (1924-1963).
The General Secretary served as administrator for the Bishop, so the records in this group are complementary to those found in the Office of the Bishop of Uganda and Education Secretary General. The CMS/NAC General Secretary also served as the Archdeacon of the Uganda Diocese.
4. Financial Secretary – (1929-1963).
5. Archbishop's Office – (1960-1993).
The Archbishop's Office replaced the Bishop's Office when the Church of the Province of Uganda was established in 1961. The Diocese's structure changed during the transition from the Native Anglican Church to the Church of Uganda (COU) but many programs continued.
6. Provincial Secretary – (1960-1995).
The Provincial Secretary replaced the General Secretary when the Church of the Province of Uganda was established in 1961. These records are complementary to the Archbishop's Office records in the Archbishop's Office.
7. Mother’s Union (1960-1991).
This collection contains all files related to Women’s work and Women’s Organizations.
8. Provincial Treasurer (1960-1991).
This eighth collection contains the files of the Provincial Treasurer as well as correspondence with the provinces of Uganda and with related organizations such as the WCC and Missionary Societies. 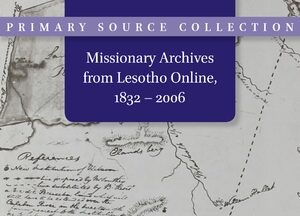 Missionary Archives from Lesotho, 1832-2006 Online
Archives of the Morija Museum Lesotho and Other Documents
Missionary Archives from Lesotho, 1832-2006 contains both the ethnographic and historical archives of the missionary-historian in Lesotho, D.F. Ellenberger, as well as the complete run of the bi-weekly magazine, the Leselinyana, from 1863 till 2006. The collection also includes historical maps, church archives, personal registers (birth, baptism, and marriage), missionaries’ correspondence, and it features the first written documents from the region. The collection is an important source for historians, theologians, anthropologists, ethnographers and linguists, working on Southern Africa or with an interest in Southern Africa. The archives at the Morija Museum are one of the most important resources of the area. In Morija, French missionaries settled at the beginning of the 19th century, influenced by the strong connections at Cape Town with Dr John Phillip, Superintendent of the London Missionary Society. They started a printing press and published, amongst others, a bi-weekly magazine: the Leselinyana, which started its first publications in 1863. A complete run of this publication is available in this archive. The missionaries documented not only the history of Basotho/Lesotho but also created dictionaries, bible translations and linguistic publications in and about the Sesotho language. The collection of mostly unpublished documents by David Frédéric Ellenberger, completed by his son René Ellenberger, covers the history of the Basotho from early times until 1854 and includes handdrawn maps and monographs. Together with church archives and some travel reports, these documents form a unique collection on the history of this region.
Online