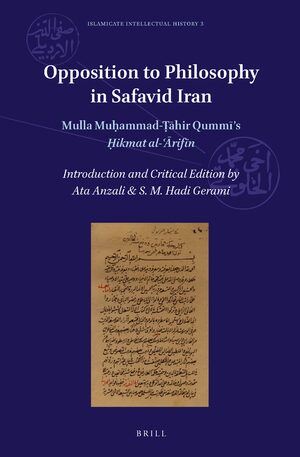 Opposition to Philosophy in Safavid Iran
Mulla Muḥammad-Ṭāhir Qummi’s Ḥikmat al-ʿĀrifīn
Series: Islamicate Intellectual History, Volume: 3
Editors: Ata Anzali and S.M. Hadi Gerami
In Opposition to Philosophy in Safavid Iran, Ata Anzali and S. M. Hadi Gerami offer a critical edition of a hitherto unpublished manuscript that is arguably the most erudite and extensive polemical work against philosophy and philosophical mysticism from the Safavid period. The introduction offers an extensive and in-depth analysis of the status of philosophy in the late Safavid period, placing Mulla Muhammad-Tahir Qummi’s (d. 1689) work in the broader context of the relevant cultural and intellectual developments of his time.
The content of Hikmat al-‘arifin itself is divided between a refutation of many traditional philosophical arguments about the nature of God and His attributes and, more importantly for those interested in Safavid intellectual history, attacks on Mulla Sadra and his students for synthesizing fundamental elements Ibn ‘Arabi’s thought into the framework of traditional philosophical discourse.
E-Book