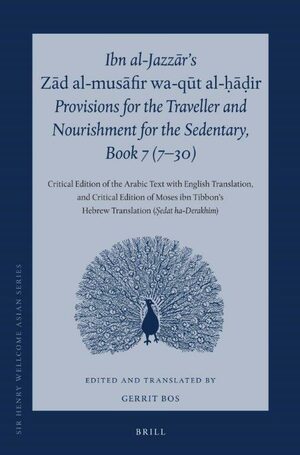 Ibn al-Jazzār’s Zād al-musāfir wa-qūt al-ḥāḍir, Provisions for the Traveller and Nourishment for the Sedentary, Book 7 (7–30)
Critical Edition of the Arabic Text with English Translation, and Critical Edition of Moses ibn Tibbon’s Hebrew Translation (Ṣedat ha-Derakhim)
Series: Sir Henry Wellcome Asian Series, Volume: 13
Editor: Gerrit Bos
The medical compendium entitled Zād al-musāfir wa-qūt al-ḥāḍir ( Provisions for the Traveller and the Nourishment for the Sedentary) and compiled by Ibn al-Jazzār from Qayrawān in the tenth century is one of the most influential medical handbooks in the history of western medicine. In the eleventh century, Constantine the African translated it into Latin; this translation was the basis for the commentaries by the Salernitan masters from the twelfth century on, and was popular in Jewish circles as well, as is attested by the fact that it was translated into Hebrew three times. The current volume covers Book 7, chapters seven to thirty of Ibn al-Jazzār’s compendium. These chapters cover a wide variety of external afflictions such as measles and smallpox; bites and stings; rabies; tumours; warts and calluses, leprosy, scurf and eczema, pruritus and scabies, furuncles, scrofula, sharā and heat rashes; fractures and dislocations; haemorrhages caused by a sword, knife or arrow; whiteness of the nails and paronychia; burns; wounds caused by pressure from the shoes; and fissures in the hands and feet.
E-Book