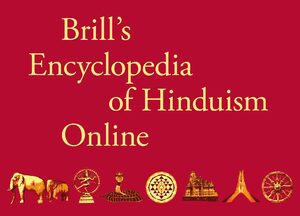 Brill's Encyclopedia of Hinduism Online
Recently relaunched in March 2019 with many improvements and new content, Brill’s Encyclopedia of Hinduism presents the latest research on all the main aspects of the Hindu traditions. Its essays are original work written by the world’s foremost scholars on Hinduism. The encyclopedia presents a balanced and even-handed view of Hinduism, recognizing the divergent perspectives and methods in the academic study of a religion that is both an ancient historical tradition and a flourishing tradition today. The encyclopedia embraces the greatest possible diversity, plurality, and heterogeneity, thus emphasizing that Hinduism encompasses a variety of regional traditions as well as a global world religion. Presenting all essays and research from the heralded printed edition, Brill’s Encyclopedia of Hinduism is now available in a fully searchable, dynamic digital format. The service will include all content from the six printed volumes.

Volume I Regions and the Regional Traditions Sacred Space and Time Gods, Goddesses, and Divine Powers

Features and Benefits
• Access articles covering topics such as main regions within and beyond India and their regional traditions; sacred spaces and time and the various gods, goddesses, and divine powers of Hinduism past and present; major religious texts, literary genres, and sacred languages; performance, the arts, and ritual traditions; leading concepts and philosophical traditions; significant historical periods and eminent figures of saints, poets, and teachers; the interaction of Hinduism with other religions and the various responses of Hinduism to a number of contemporary issues such as feminism, human and animal rights, bioethics, and the Internet; and the place and role of Hinduism among communities in diaspora.
• Keyword and full-text search.
• Navigate extensive hyperlinked cross-references.
• Consult a comprehensive index of approximately 20,000 terms, concepts, and personal and place names accompanied by short explanations.
• View rich illustrations, maps, and photographs.


The Encyclopedia of Hinduism Online (ENHI) was originally published in 2012. It has now being relaunched with lots of improvements and some additional contents (but without a price increase).

*Improvements include:
1. All quotes, poems, lists, tables, images, diagrams, and other illustrations have a greatly improved appearance.
2. Corrections of factual errors handed in by authors over the years have been implemented.
3. “Forthcoming” in the bibliographies have been updated.
4. All URLs in the running texts and bibliographies have been verified and provided with a recent “accessed [date].” This resulted in removing close to half of them, as they are no longer available.

In particular, the articles Soma (new insight regarding this psychotropic substance), Slavery (the topic having been denied/ignored for years in Indian studies), and Śaiva Āgamas (first time that the content – in contrast to the textual history – of this literary genre is dealt with in such depth) can be considered seminal.

Originally, Brill’s Encyclopedia of Hinduism was published as a finished product with no plans for updates. However, the editors have agreed to produce a 7th print volume, and these articles will be part of it. All existing customers will be able to access the new improved version and the added articles with no additional charge.
Online