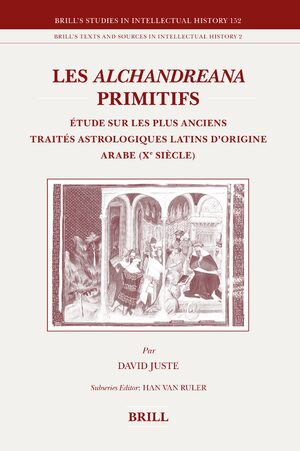 Les Alchandreana primitifs
Étude sur les plus anciens traités astrologiques latins d'origine arabe (Xe siècle)
Series: Brill's Studies in Intellectual History, Volume: 152/2and Brill's Texts and Sources in Intellectual History, Volume: 152/2
Author: David Juste
It is well known that medieval Europe owes most of its scientific learning to the translations of Arabic treatises made in the twelfth and thirteenth centuries. The earliest Arabic infiltrations in Latin science are however much older. They can be traced back to the tenth century and to the making, in Catalonia, of a large corpus of astrological treatises: the Alchandreana. Based mainly on Arabic sources, but also on Hebrew and Latin sources, the Alchandreana constitute an exceptional testimony of cross-cultural exchanges between Christian, Arabic and Jewish scholars before the turn of the first millenium. This book offers a historical study, a technical analysis and a critical edition of the whole corpus.