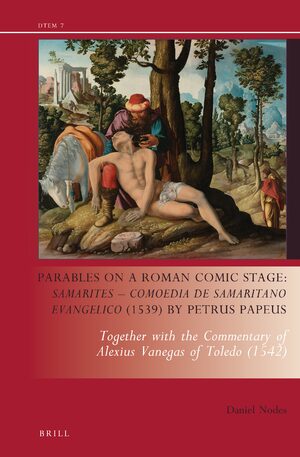 Parables on a Roman Comic Stage: Samarites — Comoedia de Samaritano Evangelico (1539) by Petrus Papeus
Together with the Commentary of Alexius Vanegas of Toledo (1542)
Series: Drama and Theatre in Early Modern Europe, Volume: 7
Author: Daniel J. Nodes
The Samarites by Petrus Papeus offers an effective blending of gospel narrative and ancient Roman comedy, combining manner of Plautus and Terence with the didacticism of medieval allegory and morality plays and the poetic diction of Renaissance humanism. In the Samarites they are the ingredients that present both moral and doctrinal teachings related to the gospel parables of the Prodigal Son and Good Samaritan. Papeus’ work is an excellent example not only of the early modern school play, but also of the shifting conceptions of drama in Europe at that time. Daniel Nodes presents a critical edition and translation of the play together with a humanist commentary produced in Toledo by Alexius Vanegas three years after the play’s first printing in Antwerp.
E-Book