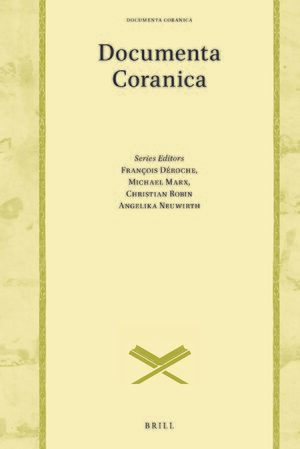 Documenta Coranica
The series Documenta Coranica is dedicated to the study of history of the Qurʾānic text as manifested in manuscripts and other sources. Documenta Coranica publishes witnesses of the Qurʾān from the early period in the shape of facsimile, accompanied by transcription and a commentary. The series makes codices on parchment, papyri, inscriptions, variant readings and other relevant sources for the history of the Qurʾān, accessible to the academic public. The first volumes contain manuscript fragments from Sanaa (DAM 01-25.1, DAM 01-27.1, DAM 01-29.1), the manuscript Ma VI 165 (Tübingen), and the codex Or. 2165 of the British Library.


The series comprises two sections: Manuscripta contains facsimile editions of Qurʾānic manuscripts with a line-by-line transcript in Modern Arabic script on the opposite page and a commentary about codicology, paleography, variant readings and verse numbering explaining content and characteristics of each manuscript. Testimonia et Studia contains studies about material evidence for the history of the Qurʾān, as manifested on papyrus, stone and rock inscriptions etc., as well in exegetical, narrative and philological sources.


Documenta Coranica inscribes itself into a German-French cooperation: in the framework of the research project Coranica, 2011-2014, and Paleocoran 2015-2018, both funded by the Deutsche Forschungsgemeinschaft and the Agence Nationale de la Recherche.