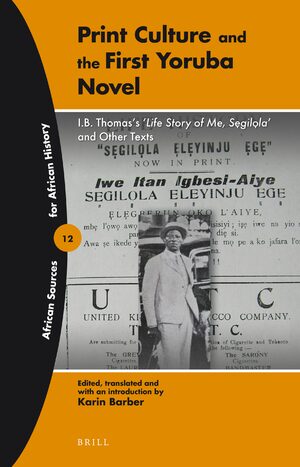 Print Culture and the First Yoruba Novel
I.B. Thomas's 'Life Story of Me, Segilola' and other texts
Series: African Sources for African History, Volume: 12
Author: Karin Barber
First appearing as a series of letters to a local newspaper, “The Life Story of Me, Segilola” caused a sensation in Lagos in the late 1920s. The lifelike autobiography of a repentant courtesan, it regaled the reader with risqué escapades, pious moralising and vivid evocations of urban popular culture. The narrative and the commentary that sprang up around it in the Yoruba press offer a unique view of life in colonial Lagos. Today it is recognised as I.B.Thomas's work and hailed as the first Yoruba novel in a major African literary tradition. This volume presents the edited Yoruba text with translation, selected newspaper correspondence, and an introductory essay showing how the text emerged from the Yoruba print culture of the time.