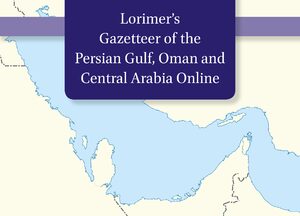 Gazetteer of the Persian Gulf, Oman and Central Arabia Online
The Gazetteer of the Persian Gulf, Oman and Central Arabia is one of the most important European primary sources for the study of the modern Gulf region from the 17th to the early 20th century. The Gazetteer was compiled and written by John Gordon Lorimer (1870-1914), an official of the Indian Civil Service. The Gazetteer was intended as handbook for British policy makers and agents in the area. The wealth of historical, political and geographical information from which Lorimer composed the Gazetteer was sourced from official documents of the British government in India and the Gulf, from British naval and military establishments and the East India Company archives, and first-hand research and surveys. It is the fullest account of the state of knowledge of the region in the late nineteenth and early twentieth centuries, and as such is still an important tool for researchers. This full-text searchable online version offers scholars and students unique possibilities to study and consult this important work.
Online