This paper deals with the question of how to interpret scribal errors. The first part tries to find explanations for inconsistencies in the determination of personal names focusing on the text genre and taking into account the study of the whole tablet. The second part analyzes the Gerichtsprotokoll KUB 13.35+, also taking into account the format and layout of the tablet. 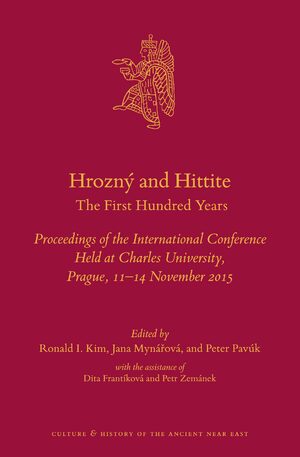 This contribution focuses on the presence of Mesopotamians and Mesopotamian medical therapeutic texts, as well as their reception in Hittite medical knowledge. The paths of transmission and possible patterns of apprenticeship will be analyzed on the basis of Akkadian prescriptions found at the Hittite capital.

Chapter 15 From Experiential Contact to Abstract Thought: Reflections on Some Hittite Outcomes of PIE *steh2- ‘to stand’ and *men- ‘to think’
Author: Marianna Pozza

This study further examines some issues outlined in Pozza (2014). In particular, the analysis of the PIE root *steh 2 - ‘to stand’ and its possible Hittite outcomes will be developed, with an attempt to connect verbs such as tiya- ‘to place oneself, step, set in’, tit(ta)nu- ‘to install, place, put, erect’, ištantai- ‘to stay put, linger, be late’ with išta(n)ḫ- ‘to taste, try (food or drinks)’, following the path already traced by Eichner (1988). This interpretation, contextualized within the theoretical framework of cognitive linguistics, allows us to reinterpret our documentary sources from a fresh perspective and more general point of view. The connection found in other IE languages between the concrete and local value of reflexes of PIE *steh 2- and their abstract and metaphorical meaning (cf. Gr. ἐπιστήμη ‘knowledge, expertise’, Lat. superstitiosus ‘who knows the truth’ < *‘which stands above’) acquires more value through the analysis proposed here, in particular the etymological interpretation of išta(n)ḫ-.

Along similar lines, Francia (2010) has proposed that, in certain contexts, the Hittite verb mema/i- ‘to speak, to tell’ could convey the meaning of ‘to speak from the bottom of one’s heart’, hence ‘to reflect’. This comparison offers new evidence for the etymological derivation of mema/i- from the PIE root *men- ‘to think’ (Carruba 1986) and confirms the importance of the relationship between setting oneself in a spatial relation with the object of knowledge, and the process of knowledge itself.

At the end of the 14th century, Aštata and Emar entered the Hittite sphere of influence. From the Hittite point of view, gods had to be worshipped in a Hittite manner (KUB v 6, col. iii 1.3–7), so after the annexation of Aštata, one wonders about the relation between Anatolia and the Syrian cities under Hittite control.

In this paper, we would like to broaden our understanding of the practice of Hittite rituals at Emar in the Late Bronze Age on the basis of letters and ritual texts. We would especially like to emphasise the occurrence in the Emar texts of the gods Daḫagu and Daḫagunanu, personifications of the daḫanga native to Nerik. Furthermore, the burning of offerings attested with the Hurrian word ambašši (Akkadian ambaššu) appears in Emar as well as in Zippalanda during the same period.

On a historical note, it was the Swiss Assyriologist Alfred Boissier who brought back to Geneva cuneiform tablets from his journey in Cappadocia at the end of the 19th century. As these tablets contained Hittite texts, he was able to read them only thanks to the work of Hrozný. Boissier’s archive in Geneva attests to the impact of Hrozný’s work on Ancient Near Eastern studies as a whole.

Chapter 5 A Fruitful Collaboration between E. Sellin and B. Hrozný during His Viennese Years: The Cuneiform Texts from Tell Taanach and Their Impact on Syro-Levantine Studies
Author: Regine Pruzsinszky

At the beginning of the 20th century, excavations at Tell Taanach, situated close to Megiddo in the Jezre’el Valley, were initiated by the theologian and Biblical archaeologist Ernst Sellin, professor in Vienna at that time. During the campaigns between 1902 and 1904, the largest then known Canaanite corpus of cuneiform texts was discovered. Sellin supported the then almost unknown Assyriologist Bedřich Hrozný in appointing him as the epigraphist of the excavation, and Hrozný subsequently published the important text finds, including lists of persons and epistolary texts, dating to the mid- to late 15th century bce. This paper provides an overview of the most important characteristics of these texts and their chronological, historical and linguistic background. Furthermore, the impact of the texts in subsequent and more current research within Assyriology is discussed, with special focus on Hrozný’s achievements within the study of the Syro-Levantine region in the Bronze Age.

On the centennial of Hrozný’s identification of Hittite as an Indo-European language I review the major issues in Hittite historical phonology, in comparison not only with his sketch of 1917 but also with my own treatment of 1994. After some methodological preliminaries and an overview of major revisions required by the last two decades of scholarship, I focus on the PIE syllabic sonorants. Hrozný (1917: 187) already tentatively concluded that their regular outcome in Hittite was aR, and this has become the standard view, but he also entertained that syllabic nasals before stops could appear as simply a. The demonstration by Goedegebuure (2010) that CLuvian zanta is the cognate of Hittite katta ‘down’ has renewed the question of the development of the syllabic nasals before stops. Confirmation that <u> in Hittite spells /o/, including in the result of *wR̥, also casts doubt on the alleged direct change of *wR̥ > uR by resyllabification (Melchert 1994a: 126–127). I reexamine the entire question of the development of syllabic sonorants in Hittite in the light of these new findings.

Part 3 The Hittites and Their Neighbors

Part 1 Hrozný and His Discoveries