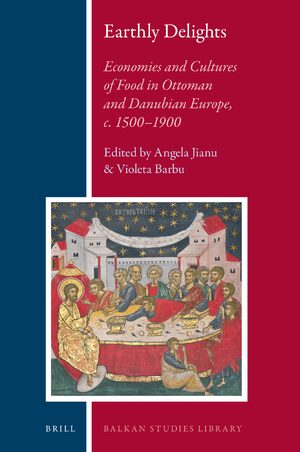 Earthly Delights
Economies and Cultures of Food in Ottoman and Danubian Europe, c. 1500-1900
Series: Balkan Studies Library, Volume: 23
Editors: Angela Jianu and Violeta Barbu
Earthly Delights brings together a number of substantial and original scholarly studies by international scholars currently working on the history of food in the Ottoman Empire and East-Central Europe. It offers new empirical research, as well as surveys of the state of scholarship in this discipline, with special emphasis on influences, continuities and discontinuities in the culinary cultures of the Ottoman Porte, the Balkans and East-Central Europe between the 17th and 19th centuries. Some contributions address economic aspects of food provision, the development and trans-national circulation of individual dishes, and the role of merchants, diplomats and travellers in the transmission of culinary trends. Others examine the role of food in the construction of national and regional identities in contact zones where local traditions merged or clashed with imperial (Ottoman, Habsburg) and West-European influences.
E-Book