Dionysus on the Other Shore
Gao Xingjian's Theatre of the Tragic
Series: Sinica Leidensia, Volume: 147
Author: Letizia Fusini
In Dionysus on the Other Shore, Letizia Fusini argues that throughout his early exile years (late 1980s-1990s), Gao Xingjian gradually moved away from Absurdist Drama to develop a dramaturgical system with tragic characteristics. Drawing on a range of contemporary theories of tragedy, this book reconfigures some of the key tropes of Gao’s post-1987 theater as varied articulations of the Dionysian sparagmos mechanism. They are the dismemberment of the dramatic self, the usage of constricted spaces, the divisive nature of gender relations, and the agony of verbal language. Through a text-based analysis of seven plays, the author ultimately aims to show that in Gao’s theater, tragedy is an ongoing and mostly subtextual dynamism generated by an interplay of psychic forces concurrently cohesive and divisive.
E-Book

Chapter 1 From Oedipus to Dionysus: the Gaoian Tragic Self from Philosophy to Dramaturgy
Author: Letizia Fusini

Conclusion Gao Xingjian’s Theatre of the Tragic as Thirdspace: towards a Transcultural Model?
Author: Letizia Fusini

Chapter 2 Toward a Theatre of the Tragic: The Bus Stop, The Other Shore, and the Transition from Absurdity to Tragedy
Author: Letizia Fusini 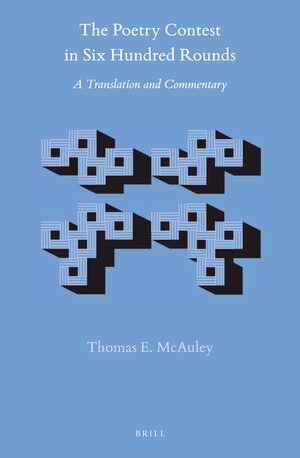 The Poetry Contest in Six Hundred Rounds (2 vols)
A Translation and Commentary
Series: Brill's Japanese Studies Library, Volume: 67
Author: Thomas E. McAuley
For the monumental Poetry Competition in Six Hundred Rounds ( Roppyakuban uta’awase), twelve poets each provided one hundred waka poems, fifty on seasonal topics and fifty on love, which were matched, critiqued by the participants and judged by Fujiwara no Shunzei, the premiere poet of his age. Its critical importance is heightened by the addition of a lengthy Appeal ( chinjō) against Shunzei’s judgements by the conservative poet and monk, Kenshō. It is one of the key texts for understanding poetic and critical practice in late twelfth century Japan, and of the conflict between conservative and innovative poets.
The Competition and Appeal are presented here for the first time in complete English translation with accompanying commentary and explanatory notes by Thomas McAuley.
E-Book

Philology was more than a scholarly tool in the system of classical Arabo-Islamic writing; it was a cognitive model. This cognitive model was embodied by scholars and repeatedly performed by them in oral and written expression. It can be understood as a habitus. This article takes seriously pre-modern critiques of a revisionist darling al-Ṣafadī’s masterful commentary al-Ghayth al-musajjam fī sharḥ «Lāmiyyat al-ʿAjam» to consider the cognitive logic of this philological habitus and the ways in which modern scholarly agendas manipulate the chronological plane of Arabic literary history.

Arsāniyūs Shukrī al-Ḥakīm’s Account of His Journey to France, the Iberian Peninsula, and Italy (1748–1757) from Travel Journal to Edition
Author: Feras Krimsti

In 1748, the monk Arsāniyūs Shukrī al-Ḥakīm (1707–1786), a member of the Lebanese Maronite Order in Mount Lebanon, was sent to Catholic Europe, tasked with securing financial support and the protection of the French King for his indebted order. The literary byproduct of this journey through the Christian lands of Western Europe was an extensive travel account. Based on recent manuscript findings, the present contribution examines the different versions in which this ego-document has been transmitted, including the original travel journal written en route by Arsāniyūs himself, copies by contemporaries who turned the travel journal into a travelogue, an excerpt included in an anthology dating to the 1870s, and finally the edition by the Jesuit scholar Ferdinand Taoutel (1887–1977). The account of the journey, it is argued, remained the object of a philological engagement that was meant to guarantee the continuity of its relevance and use in changing contexts.