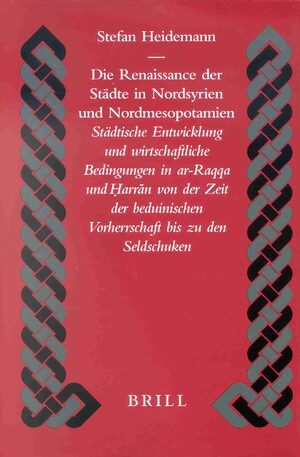 Die Renaissance der Städte in Nordsyrien und Nordmesopotamien
Städtische Entwicklung und wirtschaftliche Bedingungen in ar-Raqqa und Ḥ̣arrān von der Zeit der beduinischen Vorherrschaft bis zu den Seldschuken
Series: Islamic History and Civilization, Volume: 40
Author: Stefan Heidemann
The period between 950 and 1150 A.D. is regarded as "turning point in the history of the Islamic Culture" from the Early Islamic to the Late Medieval civilization. What led to the urban decline in between and the later recovery? Ḥ̣arrān and al-Raqqa serve as paradigma for the development in Northern Syria and Northern Mesopotamia.
The collapse of the ʿAbbasid state left the region cornered between Buyids, Fatimids and Byzantines to the nomadic tribes not acquainted with urban culture. After 1086 A.D., measures undertaken by the Seljuqs in order to safeguard their hegemony led to a renaissance of cities inspite of permanent power struggles and the crusades. They based their rule on fortified places. The financing of the army led to the distribution of land as fiefs ( iqtaʿ) and subsequently to a dislodgement of nomads and a recultivation of former agricultural land. Cash money for the treasury was generated by skimming long distance trade; this in turn required public security on the roads. An analysis of the monetary circulation according to archaeological and literal evidence serves as measure for the economic recovery. A corpus of the coin production in al-Raqqa, ḥarrān and al-Ruha'/Edessa supplements the textual sources.
Hardback

Evliyā Çelebis Anatolienreise
aus dem Dritten Band des Seyāḥatnāme. Edition, Übersetzung und Kommentar
Series: Evliyā Çelebi's Book of Travels, Volume: 3
Author: Korkut Bugday
The book of travels by Evliyā Çelebi, the Seyāḥatnāme, is one the richest works of Ottoman prose and belongs to the most important narrative sources for the history of the Ottoman Empire in the 17th century. In addition to numerous anecdotes it offers a plethora of information about different subjects and for most of the regions of the Ottoman Empire.
This book contains the edition of the travels made by Evliyā Çelebi in 1649-1650 from Syria to Istanbul. The main stops described on his journey are Urfa, Kayseri, Aksaray, Sivas and the plain of Muş.
The edition is given in Ottoman transcription with a German translation. In addition, it contains a list of contents according to the headlines of the text, two glossaries and an index.
Hardback