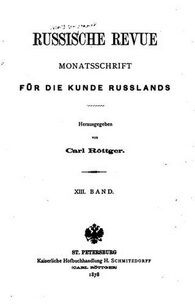 Periodicals offer not only important information in various fields but also serve as one of the most authoritative barometers for assessing the culture of an epoch, a nation or a group. The number of journals and newspapers and their circulations measure the size of the educated or literate public; their subject matter indicates the areas of widest interest; the quality of the contents suggests the level of sophistication among both writers and readers; the intellectual bent of periodicals offers evidence of the political climate or opinion.
In Imperial Russia, journals emerged as an important force, much stronger and more central to cultural life than in other European countries. Nearly every self-respecting or self- important “circle” founded periodicals.
German-language press in Russia has more that 200 hundred years’ history. It appeared during the reign of Peter the Great, who invited to Russia many professionals from various countries of Western Europe, especially from Germany.
German language communities were especially numerous in both capitals of the Russian Empire – Moscow and St. Petersburg, in the Volga region (Povolzh’e) and in the south of the Empire (Prichernomor’e). They played an important role in the economic, social and cultural life of the Russian Empire. The first and the most important German-language newspaper Sankt-Peterburger Zeitung was launched in 1727 and existed without interruption until 1914.

Carl Röttger (1815-1884)
From 1849 till 1897 at Nevskii prospekt 4, there was a bookshop which specialized in publishing and selling books and periodicals in the German language. For twenty years (1863-1883), the head of this publishing house was Carl Röttger (1821-1884). His main goal was to provide western readers with information about Russia and to supply Russian readers with information about Western Europe. In August 1872 he launched the monthly German-language journal Russische Revue. Carl Röttger invited mainly prominent scientists and professors, working both in Russia and in Germany, to collaborate with his journal. They wrote original articles and translated the work of the Russian authors as well. Röttger managed to keep the permanent staff of the journal’s authors for more than 20 years. Among them were A. Brukner, A. Schmidt, A. Garkavi, and F. Matto, who contributed to almost every issue of Russische Revue.

The content
This journal aimed at spreading information about the Russian Empire, especially outside the Russian borders. The focus of the journal was history, economics and literature. By means of original articles, essays and translations the journal gave an account of the political, social, economic and scientific life in all parts of the Russian Empire. A good deal of material was devoted to Russian-German relations, Russian trade, transport, industry, and migration.
For instance, F. Matto wrote an overview of Russian foreign and domestic trade and Russian industry in almost every Issue of the journal. Each year a budget of the Russian Empire was published. Every issue had an article devoted to one branch of industry or another, and to banking and finance. The development of telegraphy and the construction of railroads attracted particular attention of the editors.
In addition, every issue contained a statistical description of a city in Russia, such as Warsaw, Viatka, Baku, Tiflis, Samara, Omsk, Irkuts and others. There were also statistical and ethnologic reviews about different regions of the Russian Empire, mainly in Siberia and Central Asia, such as Turkmenistan, Chukotka, etc. In such ethnological material the reader could find descriptions of the customs and traditions of different people, their clothes, etc.
Almost every issue of the journal contained "Kleine Mitteilungen” - a short description of current political and cultural events; and "Literaturbericht" - reviews of recently published books. Vol. 31 includes General register.

In 1883, Carl Röttger went to Germany for medical treatment and died there in 1884. His a son–in law Rudolf Hammershchmidt became editor-in-chief. The journal became more and more commercial. It was published quarterly rather than monthly, and it ceased to exist in 1891.
Microfiche Collection