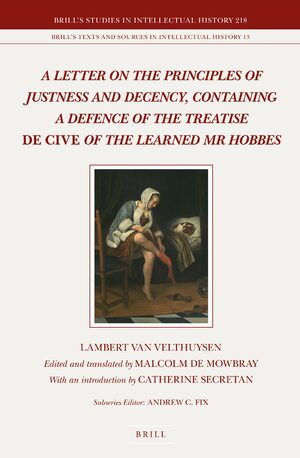 A Letter on the Principles of Justness and Decency, Containing a Defence of the Treatise De Cive of the Learned Mr Hobbes
Series: Brill's Studies in Intellectual History, Volume: 218/13and Brill's Texts and Sources in Intellectual History, Volume: 218/13
Editor: Malcolm de Mowbray
Author: Lambert van Velthuysen
Although little known today, the Utrecht physician and town councillor Lambert van Velthuysen (1622–1685) was a prolific Dutch seventeenth-century philosopher and a vociferous advocate of the new philosophies of Descartes and Hobbes. The Letter on the Principles of Justness and Decency of 1651 constitutes both the first published reaction to Hobbes's political philosophy and the first attempt by a Dutch philosopher at using Hobbes to supply a ‘Cartesian’ moral philosophy. It is also a highly original work that seeks to define the nature of virtue and vice and to justify the magistrate's right to punish crimes. It will thus be of interest not only to historians of philosophy but to all those interested in the social and cultural history of the Dutch Golden Age.