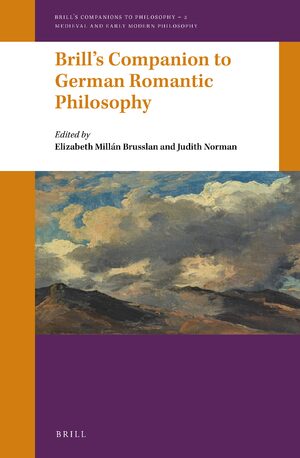 Brill’s Companion to German Romantic Philosophy
Series: Brill's Companions to Philosophy: Medieval and Early Modern Philosophy, Volume: 2and Brill's Companions to Philosophy, Volume: 2
Editors: Elizabeth Millán Brusslan and Judith Norman
Early German Romanticism has long been acknowledged as a major literary movement, but only recently have scholars appreciated its philosophical significance as well. This collection of original essays showcases not only the philosophical achievements of early German Romantic writers such as Friedrich Schlegel and Novalis, but also the sophistication, contemporary relevance, and wide-ranging influence of their philosophical contributions. This volume will be of interest both to students looking for an introduction to romanticism as well as to scholars seeking to discover new facets of the movement – a romantic perspective on topics ranging from mathematics to mythology, from nature to literature and language. This volume bears testimony to the enduring and persistent modernity of early German Romantic philosophy.
E-Book