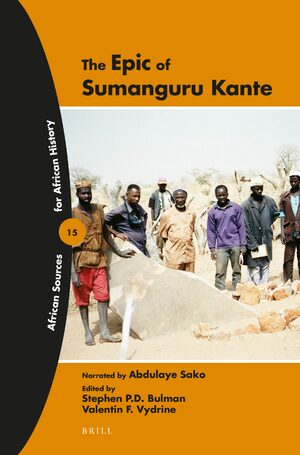 The Epic of Sumanguru Kante
Series: African Sources for African History, Volume: 15
Editors: Stephen Bulman and Valentin Vydrine
The Epic of Sumanguru Kante contains the Bamana text and English translation of griot Abdoulaye Sako’s oral narrative of the life of Sumanguru, recorded in 1997 in Koulikoro (Mali), together with explanatory notes, a scholarly introduction, and sections on the Bamana language and musical accompaniment. Sumanguru is a familiar figure within Manding epic oral traditions about ancient Mali. But while these narratives generally focus on Sunjata Keita, Sako’s oral poem is rare in according Sumanguru the central role. In so doing he includes hitherto undocumented episodes relating to Sumanguru’s life and role as the ruler of Soso, the little known state said to have flourished in the western Sudan between the fall of ancient Ghana and rise of ancient Mali.
E-Book