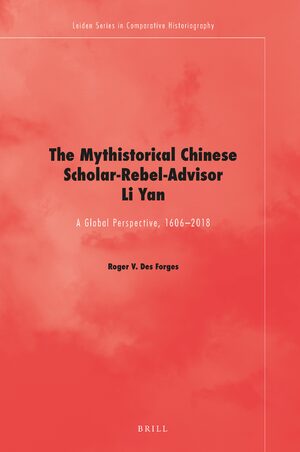 The Mythistorical Chinese Scholar-Rebel-Advisor Li Yan
A Global Perspective, 1606-2018
Series: Leiden Series in Comparative Historiography
Author: Roger V. Des Forges
Roger Des Forges here examines the puzzle of Li Yan, a Chinese scholar who advised the rebel Li Zicheng (1605-1645), and helped him to overthrow the Ming, only to die at his hands. For more than three centuries, Li Yan’s identity and even existence were seriously questioned. Then, in 2004, there was discovered a genealogical manuscript which includes a Li Yan (1606-1644). He now appears to be the principal historical reality behind the Li Yan story, which became a powerful metaphor for the rise and fall of Li Zicheng’s rebellion. Offering a fresh theory of Chinese and world history, the author elucidates Li Yan’s historical significance by comparing and contrasting him with similar figures in other times and places around the globe.
E-Book

Chapter 3 Persistence of the Story in the Republic
Author: Roger V. Des Forges

Chapter 1 The Textual Origins and Growth of the Story in Jiangnan
Author: Roger V. Des Forges