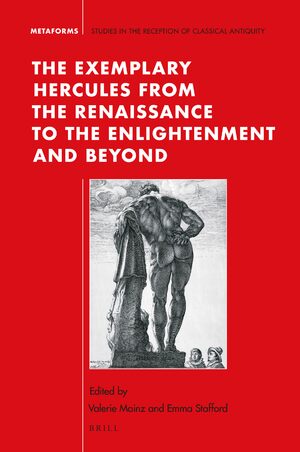 Chapter 1 The Choice-Making Hercules as an Exemplary Model for Alessandro and Federico Gonzaga and the Fifteenth-Century Latin Translation of Prodikos’ Tale of Herakles by Sassolo da Prato
Author: Ioannis Deligiannis

The Latin translation of Prodikos’ tale of Herakles, as attested in Xenophon’s Memorabilia and versed into Latin by Sassolo da Prato in the fourth decade of the fifteenth century, is preceded by Sassolo’s dedicatory epistle to Alessandro Gonzaga, the youngest son of Gianfrancesco Gonzaga, Marquis of Mantua. The image of the young Hercules conversing with Virtue and Pleasure dominates and defines the content of the epistle. Yet Sassolo’s focal point is not Hercules himself, but the comparison between Virtue and Pleasure. Sassolo uses the proximity of Hercules’ age to Alessandro’s as a pretext to build around it a strongly persuasive protreptic in favour of Virtue and against Pleasure. He makes subtle insinuations about the domestic events that troubled the House of Gonzaga between 1436 and 1441. Although Sassolo’s translation was originally dedicated to Alessandro Gonzaga, in an effort to deter him from abandoning his intellectual education and focusing on military glory, and was apparently meant to be Sassolo’s attempt at finding patronage under Alessandro, two manuscript copies of this very translation made in the early 1460s by the famous calligrapher Felice Feliciano reveal that the choice-making Hercules was used as an exemplary model for Alessandro’s nephew and future heir to the Marquisate of Mantua, Federico Gonzaga. One of these manuscripts (ms. Vat. Reg. Lat. 1388) – but possibly the other too (ms. Padua B.P. 1099), although it is mutilated – contains a miniature depicting a fully mature Hercules, holding his club and wearing his characteristic lion-skin, and at the same time standing between Virtue and Pleasure, looking distrustfully at the latter, while unconsciously leaning towards the former. The chapter studies the way in which Prodikos’ tale of Herakles was used for the exhortative instruction of princes of the ruling house of Mantua of two generations from the 1440s to the early 1460’s. Hercules was not used as a traditional heroic symbol, but it was his encounter with Virtue and Pleasure, the very focal point of Prodikos’ tale itself, that served this kind of instruction.

The seminal article, ‘Hercules and the Radical Image of the French Revolution’ by Lynn Hunt appeared in the second issue of the journal Representations in the spring of 1983. That contribution to the study of the political culture of the French Revolution claimed that the figure of Hercules came quite suddenly to stand in for the French people. Hunt also observed that the re-invention of this mythic hero in the guise of a representative of collective popular power at its most militant was a creation of the Jacobin government and not of the popular classes, for the strong worker colossus featured only later in the socialist and proletarian iconography of the nineteenth century. Through a close analysis of a range of visual imagery, this chapter revisits the picturing of Hercules during the French Revolution to consider how this mythical being had figured under the Ancien Régime and was then re-appropriated at a time when the French nation went to war. It may be that the guises of the fighter and even of the flawed warrior hero, rather than those of the labouring worker, provide a better explanation for the appearances of Hercules at this pivotal moment in history.

The exploits of Hercules, one of the most popular literary and artistic themes of the Renaissance, flourished particularly in tapestries, a major artistic genre of this period. Fine tapestries presenting this theme were produced by the best weaving workshops of the former Netherlands. The success of the theme in tapestry invites us to ponder the special meaning given to it by the princes, the privileged recipients of these tapestries. There is no doubt that, more than any other hero, Hercules served as their model as he embodied the virtus heroica, i.e. ‘active virtue’, which encompassed bravery, intrepid acts and erudition. This chapter will delve deeper in the matter by focusing on the period between the middle of the fifteenth century (when the theme first appears in tapestries) and the 1560s. In addition to the exceptional quantity of preserved tapestries (over a 100), the numerous references to the Herculean theme in ancient inventories and descriptions confirm its importance at the time and reveals the complexity of its iconography.

Allusions to Hercules feature in caricatures of the British Prime Minister William Pitt the Younger, and some of his political contemporaries, at the turn of the eighteenth century. Imagery such as Pitt the child, strangling twin serpents topped by the human heads of his political rivals Charles James Fox and Lord North in Thomas Rowlandson’s ‘The Infant Hercules’ (1784), conveys an ambiguous message: Pitt dominates his enemies, but he is also inexperienced, and has attained his exalted political position prematurely. In some cases Pitt assumes the guise of Hercules, and in others Pitt is a Labour, and therefore a problem to be vanquished, as in another cartoon by Rowlandson where he appears as an animal in the Augean stables (1805). This chapter will examine the utilisation of elements of the Hercules myth in the late eighteenth-century political context, and will question whether the caricatures were intended to convey a positive or negative image of a politician or political action. The reception of such imagery by their intended audience(s), as well as more general allusions to antiquity in political satire of the period, will also be considered. Finally, the position of these political cartoons in the long history of the use of Hercules as a motif in political discourse will be scrutinised, thereby connecting them with ancient topoi such as the comparison in late antique panegyric of Constantine with the snake-strangling infant Hercules (Pan. Lat. 4 (10) 16.6).

As a result of the advent, in the late-mid eighteen-hundreds, of an art history of ancient statuary, Hercules’ heroism underwent a process by which new figures began to compete for prominence in a fluctuating symbolic imaginary of virile rule, autonomy and self-rule. The new ways of accommodating the beholder to heroic force was heralded by accounts of Greek statuary in Winckelmann’s Geschichte der Kunst des Altertums (1764). In his insistence on a poetic and aesthetic Greek mindset, and in his portrayal of a society devoted to cultural displays of autonomy, truth-seeking and beauty, Winckelmann evacuated the political purchase of the active and triumphant Herculean warrior, and turned instead on a youthful male heroic ideal, one inseparable from the emblematic ‘suppleness’ and quiet solemnity of the actual adolescent body. This and later accounts turned on ancient statues of young male gods as the new imaginary of the hero, their virility not yet distinct, and their bodies a renewable source of aesthetic interest in Greek liberty. The current contribution considers, first, the contested position occupied by Hercules in accounts of classical statuary such as those of Winckelmann. Second, it examines how the gradual fracturing of Hercules’ grip on virile rule and power, along with the aesthetic treatment given to Greece’s warrior-youths, might go some way towards explaining the problematic image of Hercules in examples of statuary by John Flaxman and Antonio Canova around 1790–1800, as Hercules becomes the protagonist of negative images of dishevelled violence and senseless pain.

In scholarship on sixteenth-century France, Hercules is most widely known as the Lucianesque figure, the ‘Gallic Hercules’ who found his way into the hearts and minds of humanists, who, as R.E. Hollowell put it, ‘saw in [him] a ready-made literary and artistic device to glorify their language, their literature, and their monarchy’. In a less-determined geographical and national context, Erasmus focuses in his adage Herculei labores not on the image of the man but on the commonplace of his travails: these can mean ‘something great and manifold’, but also may designate those efforts which mostly benefit others and bring little profit to the doer. Indeed, in the course of the long explanatory note on the adage, Erasmus quickly dispenses with typical lessons for teaching the king before turning to himself and underscoring his thankless devotion to collecting ancient wisdom. ‘Anyone,’ he concludes, ‘who cares for the restoration of literature must have a truly “Herculean” spirit.’ This chapter will explore the light such an Erasmean perspective could shed on the works of the sixteenth-century French poet Joachim Du Bellay, in particular on his most famous poetic collection: The Regrets. The collection engages with several mythological characters, most notably with Odysseus, but also Jason and Hercules. Considered to be paragons of wisdom in the period, they appear in association with King Henri II because of the prevailing royal iconography.

In late 1493 the itinerant poet Johannes Michael Nagonius travelled to the court of Maximilian Habsburg with a deluxe manuscript of Latin epic poetry. This gift was intended to encourage the future Holy Roman Emperor to hurry to Rome for his immediate coronation by Pope Alexander VI. Although it is difficult to extract a single, distinct policy from the complicated web of intrigue that distinguishes Borgia politics, it seems that in 1493 papal and imperial interests coincided, and that the manuscript was written in the tide of anxiety, rumour and speculation about King Charles VIII of France’s proposed invasion of Italy. Maximilian’s arrival in Rome would at least balance, if not deter, the threatened French invasion and thus allay the Pope’s fears that the advance of the French upon Rome would signal his own deposition. For Maximilian, by protecting his own interests, would, as Holy Roman Emperor, be duty-bound to defend the Pope. In his verse the poet imagines Maximilian’s arrival in Rome. In a tour of the ancient sites Maximilian visits the ruined Ara Maxima. Saddened by its dilapidated condition, Maximilian promises to restore the altar to its former glory. Maximilian presents a small offering to the god at which Hercules himself appears and encourages Maximilian to imitate his own example: Macte animis, Caesar, nostros imitare labores (‘A blessing on your spirit, Caesar, imitate our labours’). Hercules’ labours and apotheosis are thus associated with papal expectations of Maximilian. This chapter will explore the role of Hercules in the creation of the image of a new world emperor in late fifteenth-century papal diplomatics.