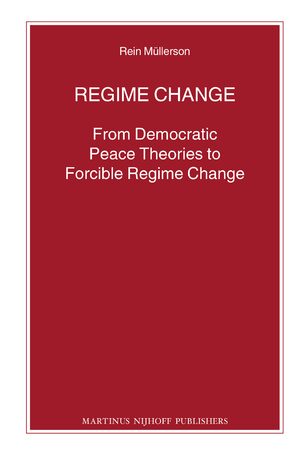 From an African Village to a Global Village
著者： Rein Müllerson

Regime Change
From Democratic Peace Theories to Forcible Regime Change
丛编： Nijhoff Law Specials, 卷： 84
著者： Rein Müllerson
This book analyses the recent and on-going regime changes, their internal causes and the external factors that either stimulate or obstruct political reforms. Comparing today’s political reforms with the evolution of the political systems in the Western world, and especially with the sequencing of and congruence between the development of civil institutions and economic and political systems then and there, permits to reveal serious problems with the current attempts at regime change. A comparison of the processes started by Gorbachev in Russia and the Chinese reforms initiated by Deng Xiaoping, and the current situation in these countries and their respective positions in the world, highlights both the benefits and dangers of radical reforms. The second part of the book is devoted to the study of moral, legal and political aspects of various forms of external interference with the aim of influencing change.
电子书