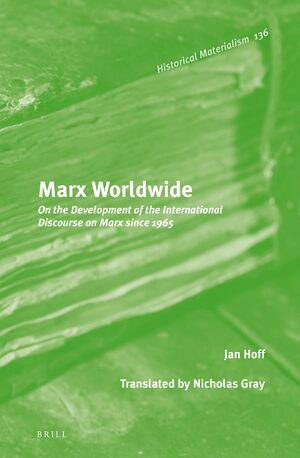 The Development of Varying Marx-Oriented Conceptual Approaches between the Poles of Politics and Theory from the 1960s to the Present
Author: Jan Hoff

The Further Development of the Marx Debate since the 1960s: A Survey
Author: Jan Hoff

In-Depth Analyses: Central Discourses within the German and International Discussions of Marx from the 1980s to the Present
Author: Jan Hoff

Marx Worldwide
On the Development of the International Discourse on Marx since 1965
Series: Historical Materialism Book Series, Volume: 136
Author: Jan Hoff
In his study Jan Hoff charts the unprecedented global boost that has been experienced by critical Marxism since the mid-1960s. In particular Hoff shows the development of interpretations of Marx’s method; of critical social theory oriented towards Marx's critique of political economy; and of significant disputes concerning the different versions and iterations of the critical project that ultimately culminated in Capital. His book investigates the ‘globalisation’ of Marx debates, the complex network of international theoretical approaches that have been devised between the poles of science and politics, the transfer of theory and the historical development of schools of thought beyond national and linguistic borders.

Marx Worldwide provides an overview of Marx reception in various regions of the world, in which the extra-European process of theory formation receives particular attention; and it shows how, despite the supersession of Marxism in the sense of an all-encompassing worldview, the Marxian aim of providing an explication of the internal connection of economic categories and relations, and thereby of accomplishing the ‘de-mystification’ of the ‘deranged world’ of the economy, is as relevant and as theoretically important as it has ever been.