This article revisits theologian Ulrich Duchrow’s three-decade-old use of the Protestant notion of status confessionis to denounce the capitalist global economy. Scholars quickly dismissed Duchrow’s argument; however, philosopher Thomas Pogge has developed a remarkable “negative duty”—based critique of the current global economic order that might help revitalize Duchrow’s position. The article argues that sound reasons exist for the churches to declare the contemporary world economy a—provisionally termed—status confessionis minor. After explaining the inadequacy of Duchrow’s original position and summarizing Pogge’s account, the article develops a twofold argument. First, Pogge’s in-depth inquiry into the world economy gives Duchrow’s call for a status confessionis a strong yet narrowing economic foundation. Second, to declare the world economy a status confessionis minor is theological-ethically justifiable if the limited though indispensable “prophetic” significance of doing so is acknowledged. Thus, Duchrow’s approach is justified, but only partially.

Meaning is important in everyday life, and each science focuses on certain ways in which reality is meaningful. This article (the second of two) discusses practical implications of Herman Dooyeweerd’s understanding of meaning for everyday experience, scientific theories, scientific methodology, and philosophical underpinning. It uses eight themes related to meaning in Dooyeweerd’s philosophy, which are discussed philosophically in the first article (and summarised here). This article ends with a case study in which the themes are applied together to understanding Thomas Kuhn’s notion of paradigms.

In contrast to the dominant way of thinking in economics, in which economics is seen as a positive or neutral science, this paper argues that economics is a discipline that has its own normativity. This economic normativity should be distinguished from what is usually considered as ethics, which normally has a broader scope (e.g., stewardship). This paper further argues that the budget constraint is a key source of economic normativity, although it is not the only source. Economic-theoretical and philosophical aspects are discussed, and consequences for economic life and policy are assessed.

Early Christian Martyrdom and the End of the Ur-Arché
Author: Sandra Lehmann

This essay follows the assumption that the first principle of classical metaphysics has its counterpart in political sovereignty as suprema potestas. Therefore, both can be equally described as arché. Their epitome is the God of so-called ontotheology, who thus proves to be what I call the Ur-Arché. In contrast to current post-metaphysical approaches, however, I suggest overcoming ontotheology through a different metaphysics, which emphasizes the self-transcending surplus character of being. I regard early Christian martyrdom as an eminent way in which the surplus of being is manifested. This has two interwoven aspects, one ontological and one political, both arising from the excessive idea of the Christ event, or the notion that there is life beyond life unto death. I will analyse the mechanism allowing early Christian martyrs to counteract Roman imperial sovereignty. Finally, I will relate this to contemporary life systems in which sovereignty has become anonymous biopower. 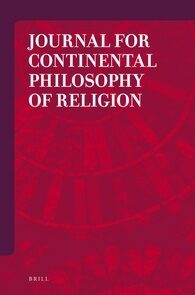 God and the Truth of Human Being
Author: Andrew Benjamin

The aim of this paper is to develop a conception of God that works with the identification of being-before-the-law and being-with-God. In addition, it argues that developing a rethinking of God along such lines necessitates, equally, the development of the concomitant political theology and philosophical anthropology that such a repositioning of God envisages. Processes of subject creation have to be thought in relation to any philosophical engagement with the law.

With the upsurge in various forms of religion, especially dogmatic forms that kill in the name of good versus evil, there is an urgent need for intellectuals to acknowledge and analyze the role of religion in contemporary culture and politics. If there is to be any hope for peace, we need to understand how and why religion becomes the justification for violence. In a world where religious intolerance is growing, and the divide between the secular and the religious seems to be expanding, Julia Kristeva’s writings bridge the gap and once again provide a path where others have seen only an impasse. Her approach is unique in its insistent attempt to understand the violence both contained and unleashed by religion. Moreover, she rearticulates a notion of the sacred apart from religious dogmatism, a sense of the sacred that is precisely lacking in fundamentalism.