'Jam dbyangs Mkhyen rtse Chos kyi dbang phyug (1909–1960) was born in Kham, during one the most critical periods of Tibetan history. His life story reflects the controversial and dramatic times that troubled Tibetan history before the Chinese annexation. When he was three years old, he was recognized as a reincarnation of 'Jam dbyangs Mkhyen rtse'i dbang po (1820–1892) and received an intense Buddhist education from many important masters of the time. He mainly conduced his life secluded in retreats and rediscovered several gter ma, under the name of He ka gling pa. He never wanted to get involved in the internecine feuds and rivalries for the control of the monasteries that their administrators undertook. He died in prison in 1960, soon after the major part of the monasteries in the Khams province had been razed to the ground.

The thread of this story is unravelled against the background of the political situation of the Khams region in the first half of the nineteenth century, where other different lives intertwine with the figure of mKhyen rtse Chos kyi dbang phyug, casting light on the wider social, ideological and political context of the historical time. 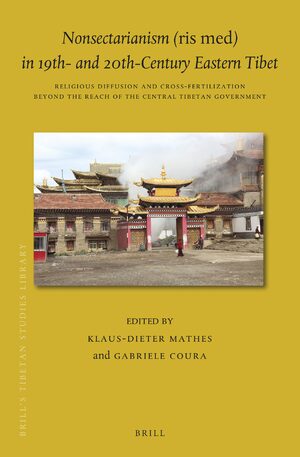 Blo bzang mchog grub rgya mtsho, the Dge bshes of Dza 'go (ca. 1840–1914) studied at 'Bras spungs Blo gsal gling in Central Tibet where he earned a highly prestigious dge bshes rab 'byams pa degree. Back home in A mdo, Dza 'go Dge bshes received the full-fledged Jo nang teachings from Sbyang pa Kun dga' nges don and established a retreat center for practicing the Jo nang ṣaḍaṅgayoga of the Kālacakratantra. Dza 'go dGe bshes strictly adheres to Dol po pa Shes rab rgyal mtshan’s (1292–1361) “uncommon way” of presenting gzhan stong as the ultimate underlying intent of all the Buddha’s teaching, while Dge lugs presentations are only accepted, in a form of hierarchical inclusivism, as a stepping stone to the final Jo nang viewpoint. Such self-assured hermeneutics were not only possible because of the region’s quasi-independence from the Dga' ldan pho brang government, but also because of the accomplished tantric’s charismatic reputation.

This paper discusses a nineteenth-century tradition stemming from eastern Tibet that the late Tibetologist Gene Smith called the “Dge mang movement.” In contrast to an allegedly “nonsectarian movement” (ris med) that is antagonistic toward the Dge lugs tradition or incompatible with it, the Dge mang movement is marked by an integration of Dge lugs and Rnying ma traditions of scholarship and practice in a way that they are configured to be mutually illuminating. I aim to shed light on this Dge mang movement, which is marked by the hybridity of Dge lugs and Rnying ma, and contrast it with new iterations of sectarian identity built around the doctrine of “other-emptiness” (gzhan stong) that directly challenge and exclude the Dge lugs school.

The Jo nang pas and the Others: Intersectarian Relations in Nineteenth and Early Twentieth Century A mdo and Khams
Author: Filippo Brambilla

After the forced conversion into Dge lugs of all its religious institutions in the Dbus gtsang region during the second half of the seventeenth century, the Jo nang tradition resettled in the southeastern periphery of A mdo, where it had been successfully establishing a series of monasteries starting from the early fifteenth century. After a long hiatus of transition and recovery, nineteenth century A mdo saw a resurgence of Jo nang monastic culture and literary production that intertwined with the cultural fervor and religious activities of nonsectarian luminaries in Khams. Based on the historical writings of Ngag dbang blo gros grags pa (1920–1975), this paper broadly examines the main Jo nang monasteries and lineages that developed in 'Dzam thang and its neighboring areas between the nineteenth and early twentieth century and researches their interactions with religious institutions and masters of different Tibetan traditions. Thereby, it provides an overview of alternative intersectarian approaches swinging between the extremes of inclusivism and pluralism, and, in particular, some insight into the factors that may have led Jo nang scholars such as Ngag dbang tshogs gnyis rgya mtsho (1880–1940) to adopt approaches that seek to reconcile Jo nang and Dge lugs views.

Kong sprul Blo gros mtha' yas grew up in a family of Bon practitioners. Later, after he had turned to Buddhism, he wrote in an autobiographical poem that he had “abandoned the Bon pos.” Various statements from his Mdzod lnga (“Five Treasuries”) shed a light on his attitude towards Bon. He rejects the teachings of the Bon of Cause and maintains a hierarchical-inclusivist attitude towards reformed Bon and Bon treasures, which he depicts as a skillful means for the benefit of those who are unable to understand the Buddha’s teaching. The use of terminology common to Bon and Buddhism substantiates Kong sprul’s claim that the two systems have a common origin. This position met with opposition from Bon authors, for instance Shar rdza Bkra shis rgyal mtshan. In some cases, positive statements seem to be motivated by pragmatism: Kong sprul praises Bon in order to demonstrate the nonsectarian attitude he ascribes to himself, or to show respect for his deceased Bon teacher. However, he never goes as far as seeing Bon and Buddhism as equal, and there is no evidence that he ever did Bon practices.

Zhabs dkar tshogs drug rang grol (1781–1851) is an example of a nonsectarian figure in nineteenth century A mdo who attempted to reconcile the Dge lugs and Rnying ma sects through his physical appearance, spiritual training, and written works. In this chapter, I examine Zhabs dkar’s commentaries on canonical texts and topics belonging to the Dge lugs, Bka' gdams, and Rnying ma sects. I demonstrate that although Zhabs dkar stays true to the Rnying ma tradition in his texts dedicated to Rnying ma topics, he makes subtle but significant departures from Dge lugs orthodoxy in his commentaries on Tsong kha pa’s (1357–1409) Stages of the Path to Enlightenment (Lam rim chen mo) and Rgyal sras thogs med’s (1296–1369) Commentary on the Seven Points of Mind Training (Blo sbyong don bdun ma). Specifically, when we examine the chronological progression of Zhabs dkar’s commentaries on Dge lugs and Bka' gdams canonical texts, there is a general move away from orthodox Dge lugs interpretations of the texts to a more Rnying ma orientation where the Rdzogs chen teachings are seen as the most ultimate form of the Buddhist teachings.

This article looks at the relation between Pha bong kha and the ris med movement through Pha bong kha’s devotion to the protector Shugs ldan. Going back to the first narrative of Shugs ldan’s origin, written in the middle of the eighteenth century, it appears that this protector was early on considered having disturbed the Fifth Dalai Lama because the later was promoting nonsectarianism. However, the criticism of nonsectarianism could not be motivated by mere religious consideration but was mainly a political issue. Indeed, nonsectarianism was the center of the ideology supporting the Tibetan state founded by the Fifth Dalai Lama, while his opponents advocated for a purely Dge lugs state, as well as a mchod yon relationship with the Manchu emperor. Pha bong kha had some connection with the author of the first narrative of Shugs ldan’s origin, as well as with other lama of that time, who shared the same concern for the Dge lugs tradition’s hegemony. Moreover, after the fall of the Machu empire, the Thirteenth Dalai Lama attempted to centralize the Tibetan state around his institution, as did the Fifth Dalai Lama. This pushed Pha bong kha to build a mythico-ritual system around Shugs ldan, in order to counter the mythico-ritual system of the Dalai Lama institution, and to promote an exclusive allegiance to the Dge lugs tradition.

Karma Bkra shis chos 'phel’s catalogue to the nineteenth century Dpal spungs reprinting of the Seventh Karma pa’s Indian Mahāmudrā Works is an impressive composition in it its own right, containing a brief treatise on Mahāmudrā, accounts of the transmission lineages for each text in the collection, a short biography of the Seventh Karmapa, and a discussion of the benefit and purpose of this publication project. Many of Karma Bkra shis chos 'phel’s comments on the benefits of republishing this collection draw upon familiar tropes associated with the cult of the book and the broader Buddhist entropic vision of the deterioration of the Dharma. We are fortunate, however, that Karma Bkra shis chos 'phel also provides a handful of passages that contain his observations of contemporary attitudes toward Buddhism and the deterioration of standards concerning what is and is not fit to print. In this essay, I argue that these passages provide a glimpse of an emerging sense of the modern in Karma Bkra shis chos 'phel’s catalogue. In light of this “glimpse of the modern,” I raise the following questions for the broader field of Tibetan Studies: if the 19th and early 20th century ecumenical movements in Europe, North America, Meiji Japan, and elsewhere emerged out of a concern with the role that religious traditions might play in the modern era, is it possible that the ecumenical impulse that motivated Tibetan nonsectarian authors in the same period reflects a similar awareness of the early onset of modernity in Eastern Tibet? And, if so, might this be an early indication of a wholly Tibetan alternative modernity?

Mdo sngags Chos kyi rgya mtsho (1903–1957) was a scholar from Mgo log in Eastern Tibet who proposed a synthesis of Dge lugs and Rnying ma philosophy and practice. This chapter examines that synthesis by focusing on his Gsang sngags gsar rnying gi lta ba gcig tu sgrub pa dag snang nor bu'i me long, which claims that Dge lugs doctrine is compatible with early Rnying ma sources, especially writings by Klong chen rab 'byams (1308–1364) and Rong zom Chos kyi bzang po (1012–1088), and Phyag rdzogs gdams pa'i skor gyi brjed tho, which recommends the gradualism of lam rim while also recognising the importance of Rdzogs chen and Mahāmudrā. Such syncretism involves a notable elision of 'Ju Mi pham’s (1846–1912) transformation of Rnying ma scholasticism and represents an unusual form of nonsectarianism (ris med) quite unlike that which was advocated by Kong sprul (1813–1899) and Mkhyen brtse'i dbang po (1820–1892).