This paper focuses on three religious processions, in each of which (images of) deities participate in the cortege: the pompa circensis at Rome and processions of the cults of both Mater Magna and Isis. It is not a new study (after many) of these processions as religious facts. The aim of this contribution is to propose to investigate the role music plays in the Latin and Greek narratives that inform us, since we have hardly any other evidence, besides a few images like that of the exergue. My argument is that the musical ambiance depicted in these narratives, each of which stages a different divine figure that has been granted an officially recognised Roman public status, is first and foremost a device for drawing out a particular religious identity through the use of musical signs; thus it has only a tangential concern with the religious specificities of these cults. Music stands as a benchmark, the more so in such subtly rhetorical constructions. 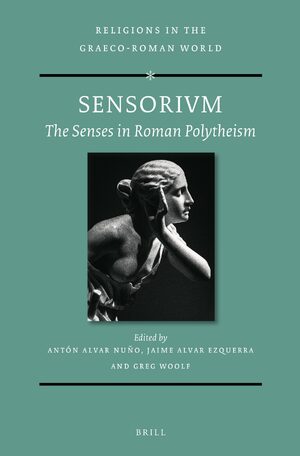 Chapter 8 Day and Night in the Agones of the Roman Isthmian Games
Author: Rocío Gordillo Hervás

After the Roman conquest of Greece the agones that constituted the archaia periodos underwent a deep transformation, shifting from being rituals solely associated with the Hellenic culture and religion and being characterized as Panhellenic, to a pan-imperial dimension due to the integration of the imperial cult. This work aims to analyze the agones with a major either pan-imperial or Panhellenic characterization in relation to their celebration being carried out either during daytime or during night-time, thus tracing a broad differentiation between 1) the diurnal rituals, the majority of which were integrated into the imperial cult, with a direct link to the sanctuary deity; 2) the nocturnal rituals, which were linked to the Hellenic religious tradition and which typically commemorated the heroes who were regarded as the founders of the games. This work will also focus, as a specific case-study, on the rituals which were celebrated in the sanctuary of Isthmia in Corinth, which included both diurnal and nocturnal rituals. The main lines of research will be: 1) the dual makeup (Greek and Roman) of the population of the Caesarian colony of Corinth, and how this influenced the rituals held in the sanctuary of Isthmia; 2) the role of the city-elites in the introduction of the imperial cult; 3) the efforts of Corinth's Greek population to preserve their Hellenic religious roots; 4) the diurnal agonistic games dedicated to Poseidon and the nocturnal mystery rituals of Melicertes-Palaimon associated to them.

It is known that some defixiones were aimed at blocking or freezing a person’s tongue in order to prevent him from speaking against the practitioner. The opposite phenomenon is less well known, that is rituals which were supposed to give to a human tongue the power of persuading, uttering prophecies, telling the truth, or making other prodigies. In several cases, the tongue itself was magically enabled to utter certain wondrous words, in other cases the whole head or the entire body was supposed to be empowered to perform exceptional deeds, while in yet other cases the magical objects gave power to the soul of a deceased person or even to a sacrificed animal. The mouth and the tongue were objects of different kinds of magic and one cannot simply suppose that they were always manipulated in the same way and for the same purpose. On the contrary, magical enactments concerning these parts of the body were many and various, depending for their goals and means on the different purposes of the practitioners.

One underappreciated way in which De rerum natura “romanizes” Epicurean thought is through its interest in ghosts. At the level of content and at the level of form, ghosts exercise a structuring influence on Lucretius’ argument for atomism. In this paper, I offer an account of why ghosts loom so large in the DRN which centers on problems of perceptual experience and tries to show that even this most “irreligious” of Roman epics shares a substrate of perceptual vocabulary with Roman religion. Writing for a Roman audience, Lucretius needed to address perceptual “facts” that emerged out of religious activity but did not, for all that, seem any real to those who perceived them.

Lucretius confronts ghosts as an obstacle. The rhetorical project that lies behind the DRN is to free its readers from the fear of death. To do this, Lucretius starts by positing sense perception as the criterion by which we should discern true claims from false ones. By this criterion, most representations of the afterlife can be dismissed as fictions that do not correspond to real objects. Ghosts, however, present an almost insurmountable difficulty for this reasoning.

The ghosts of the DRN are first and foremost a perceptual phenomenon, and this is why Lucretius needs to take them so seriously: as perceived evidence for the afterlife, they threaten to undo the connection between Lucretius’ perceptual criterion for truth and disbelief in life after death.

The preeminence of images of the dead in Roman (by contrast especially with Greek) religious practice is well-established. By reading them through Lucretius’ discourse on ghosts, and by comparison with other roughly contemporary Roman ghost stories, I aim to show that these images were perceived by Republican viewers in a way that lent them a certain evidentiary value. In this respect, at least, the perceptual worlds of Roman religion and Lucretius’ anti-religious critique coincided.

Chapter 5 Favete linguis and the Experience of the Divine: A Cognitively Grounded Approach to Sensory Perception in Roman Religion
Author: Maik Patzelt

When we approach Roman rituals from the perspective of sensory perception, the interpretation of the imperative favete linguis as nothing more than a technical command disappears. My analysis of the relation between this imperative and the sensory stimulations evoked by ritual practice shows that this ritual call does not simply command silence but, rather, ‘attunes’ (einstimmen) the ritual participants to an experience of divine presence. This call thus evokes the expectations that stamp their mark on the subsequent sensory stimulations.

Why talk about the senses when discussing ancient religion? Is such discussion just an unimportant and peripheral appendage to our otherwise fixed image of past practices? Or does consideration of the senses rather have a central importance for our understanding of the religions of the ancient world? From a point of view that treats religions as constituted and defined by the names of the gods venerated and by their organisation within a pantheon, an analysis in terms of the senses is an opus supererogatorium, surely going beyond what is necessary. The same holds true for perspectives that regard religions as rule-based ritual systems, always imperfectly reproduced by individual actors and performances. An analysis in terms of the senses might be more important for a conception of religion as specifically civic religion, i.e. as expressing and bolstering the political identity of those defined as belonging to the same body politic, but from such a perspective the issues surrounding the stimulation of emotion might easily be reduced to questions of motivation and mobilisation. This chapter proposes to take a rather different approach, attributing a central place to sensorial experiences in a consideration of specifically Roman religion from the perspective of “lived ancient religion”.

Hirpi Sorani, “the wolves of Soranus,” were priests, belonging to several Faliscan families and worshipping Apollo Soranus and other local gods. Once a year, during a popular community festival celebrated on Mount Soracte, these priests carried offerings, walking barefoot on blazing embers and feeling no pain. In antiquity, some regarded their abilities as god-given, while others attributed the immunity of Hirpi Sorani to pain to application of an ointment. Fire-walking occurred also in other parts of the Mediterranean world.

Fire-walking is well-known in the modern world. Contemporary anthropological research, employing interviews with the fire-walkers, as well as quantitative criteria of assessing their physical and mental state, sheds light on the experiences of ancient fire-walkers. Fire-walking involves alteration of consciousness, associated with the release of endogenous substances, which renders high-ordeal participants immune to pain, and results in the state of euphoria and blessedness. The research on the state of low-ordeal witnesses of fire-walking demonstrates that they were also passionately involved. Thus, perceived suffering and alteration of consciousness of several people endows the entire community with a transformative experience which can be construed in terms of redemption and purification.

These observations elucidate the cognitive and social roles of fire-walking in the ancient Mediterranean: these rituals bestowed the high-ordeal participants with feelings of euphoria and extreme salience of their experience, which compelled them to participate in the ritual time and again, while the empathy of the low-ordeal participants brought about feelings of elation and purification.

Taking into account the wide variety of mystery cults and their remarkable apogee in late Hellenistic and Imperial times, this paper will argue that Imperial cult practices—at least in some places, according to our sources—probably included certain stimuli that were implemented in order to elicit specific emotions in worshippers. However, my interest here will not be in speculating about the content of these rites, nor about what people actually experienced. Instead, this paper shows that the use of mysteric jargon and certain ritual elements in Imperial cult was devised and adopted in order to suggest a specific understanding and experience of Imperial power. The world of mysteries provided the collective framework of meaning within which those stimuli made complete sense. To this end, one of the main lines of inquiry that runs through the present volume will be explored: how and why Imperial cult made use of the collective semantic value of the mysteries.

This chapter aims to build on the existing scholarship in relation to the ancient custom of dedicating representations of the footprints of bare or sandalled feet, while at the same time seeking to revolutionise previous interpretative approaches. The goal of this paper is to review the whole body of evidence related to these Isiac examples and to give a new interpretation of it. The interpretative approach followed in recent studies has been exclusively limited to a highly positivistic iconographical attempt to use footprints as a semiological tool in order to identify—as if they were actual fingerprints—their “owners”, interpreting them as traces either of the epiphany of the god or of a devotee’s visit to a temple (possibly within the frame of a pro itu et reditu vow). By contrast, the methodological approach developed here, which combines archaeological expertise on the Isiac cults with reflections inspired primarily by the work of Georges Didi-Huberman on the art of Marcel Duchamp, considers these footprints as an open process of deeply operational value and heuristic fecundity, namely as a polysemic (spatial and morphological) visual operator of human-divine communication.