This paper has three goals. The first is to reanalyze Japanese passives from formal and functional perspectives. The second is to demonstrate that semantic characteristics of ni-passives (ni-direct and ni-indirect passives) are produced by grammatical nominalization on VoiceP motivated by metonymy in derivation, following Shibatani (2017, 2018a, 2018b). It is also said that ni-yotte passives, which are semantically neutral, are derived without nominalization and VoiceP. Third, it is proposed that CP nominalization triggered by metonymy enables the speaker’s emotional implications, under Grohmann’s (1999) derivation of root infinitives. 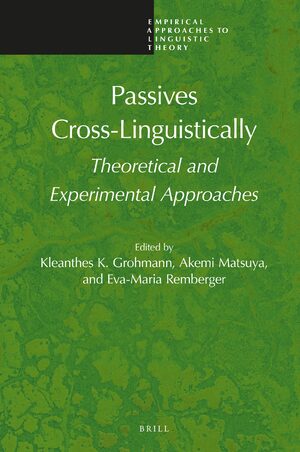 The canonical be-passive in the dialects of southern Italy is not a particularly common structure, especially when the surface subject is animate and/or the agent by-phrase is overtly expressed, giving rise at best to marginal results. In their place are typically preferred active structures involving clitic left-dislocation of the theme. Nonetheless, these same dialects exceptionally make very frequent use of the canoncial be-passive when embedded under the subject control predicate volere ‘want’. However, not only are be-passives, with animate surface subjects (including overt agent by-phrases), hugely improved when embedded under volere, but indirect object passives are also licensed, despite the fact that recipient passives prove entirely ungrammatical in root clauses. In what follows, we investigate why be-passives attain full grammaticality under volere and how such embedding also exceptionally gives rising to the full grammaticality of indirect object passives which otherwise prove ungrammatical. Among other things, the analysis explores the nature of the structural and inherent Case distinction in the dialects of southern Italy, the variation witnessed among dialects in the role of participle agreement and the presence of the passive auxiliary be in licensing indirect object passivization, how such minimal differences in agreement give rise to differing locality conditions operating on A-movement, and the role of subject control on licensing indirect object passives.

In this paper, an analysis of long-distance passives in German is developed according to which these constructions basically emerge from the co-occurrence of (i) passivization and (ii) restructuring in the language. Based on Müller (2016) and Müller (2017a), I assume that passivization and restructuring both involve an operation of structure removal in the course of the derivation—of an external argument DP in the first case, and of CP and TP layers of an infinitive in the second case. The null hypothesis that I would like to pursue against this background is that a combination of the two structure removal operations gives rise to the intricate properties of long-distance passives in German. A core feature of the analysis is that it does not involve any long-distance relation at any point; argument demotion, case assignment, and morphological realization as passive all take place extremely locally. Another basic property of the structure removal approach, which sets it apart from most other analyses, is that all DP arguments selected by the verbs involved (including in particular external arguments in the embedded and matrix domains) can be assumed to be structurally represented at some point of the derivation.

Difficulties with passivization constitute a classic example of so-called ‘syntactic deficits’ across language pathologies. Language-impaired individuals are always better at comprehending and/or producing canonical structures than non-canonical ones, which has often been attributed to a breakdown or a deficit at the syntactic level (i.e. as part of narrow syntax). In the present work, we discuss impaired passives in different language disorders (specific language impairment, Down syndrome, and agrammatic aphasia). Taking passives as our main point of focus, we argue that what looks like impaired syntax in reality boils down to limitations in the externalization component of language as well as to the (over)use of default values in the context of employing processing heuristics. In the interpretation of the results, we build on the Locus Preservation Hypothesis which holds that syntactic operations are preserved and impenetrable to variation across developmental pathologies, by extending the proposal to acquired language disorders.

It is well known from cross-linguistic literature that non-active structures, characterized by argument structure alternation, manifest huge variation (Lekakou 2005, Kallulli 2006, Alexiadou and Doron 2012, Alexiadou 2014 among others). In this paper, we compare non-active structures across two typologically distinct, but geographically proximate South Asian Languages (henceforth SAL s)—Odia (Indo-Aryan) and Telugu (Dravidian). Both Odia and Telugu have a similar bi-partite voice system, with non-actives (middles, anticausatives and medio-passives) appearing with passive morphology, and reflexives appearing in the active voice. They however differ in other respects. Odia passives and non-actives are unambiguously unaccusatives, while Telugu passives oscillate between unergative and unaccusative structures, and non-actives mostly show unaccusative properties. Another particularly interesting feature of Telugu is that its non-actives have an implicit agentive reading, even in the presence of unaccusative light verbs—this possibility however does not exist for passives selecting the same light verb. We contend that these macro-variations emerge from structural differences between the two languages. Odia passives and non-actives have a vP, which is always unaccusative with either an [+activity] or a [+causer] feature. On the other hand, Telugu passives and non-actives have a voiceP that hosts an implicit agent—which in turn selects a [+activity] or [+cause] v, yielding the observed variation amongst the two types of constructions. In general, our contention is that cross-linguistic morphological and semantic differences among non-actives result from voice/v differences, with richer and more elaborate voicePs imparting more variety to the concerned languages. In the end, we show how our analysis applies effectively to non-actives of another South Asian language Kharia (Austro-Asiatic).

In addition to the canonical passive involving an auxiliary verb + past participle, there are several types of deontic passives in Romance, in which instead of the neutral auxiliary we find a movement or modal verb + past participle. These periphrases exhibit all the ingredients of a true passive: they involve a transitive verb in a participial form that agrees with the internal (thematic) argument, which can raise into a preverbal subject position; there is a passive auxiliary agreeing with the internal argument while the suppressed (external) agent argument can be reactivated by a by-phrase; moreover, the additional modal meaning of the auxiliary gives the construction a deontic interpretation.

In Romanian, a particular deontic passive is found, with the (impersonal) verb for Must (borrowed from Slavonic), trebuie făcut, literally, ‘it must done’. Trebuie appears in many constructions in Romanian diachrony and synchrony, and there are types of trebuie făcut where the participle (sometimes analysed as a supine) oscillates between a passive and an impersonal active interpretation (the latter when used with an unaccusative or unergative verb). The trebuie + participle construction is therefore a good illustration of the transition of impersonals to passives.

In this chapter, I claim that the English participial suffix -EN (as in written, closed, etc.) is the default inflection for English verbs when no other suffix is selected by the verb’s immediate syntactic environment, explaining the occurrence of -EN in a puzzlingly heterogeneous variety of contexts. Contrary to previous literature, I argue against any role for -EN in passivization. I claim instead that the auxiliary be is critically involved in marking the lack of agentivity in English passives. Even this aspect of the passive construction is a relatively superficial feature of English though, since it does not hold in languages that express passive synthetically as a verbal inflection, rather than analytically.

Passive sentences are claimed to be more difficult cross-linguistically and -populations (children, adults, people with aphasia). In healthy adults, Syntactic Complexity accounts attribute this difficulty to the complexity of computing an additional syntactic dependency (i.e., movement), while Good Enough Processing attributes it to a contradiction between an agent-first heuristic and syntactic processing outputs. Offline accuracy data support a greater difficulty for passives, but online self-paced reading data conflicts with these accounts in showing faster reading times for passives than actives. Here, we use acceptability judgments to exclude the possibility that the self-paced reading data may not have been sensitive to a late complexity effect. Experiment 1–2 further show that passive sentences are no more complex to parse and interpret than active ones, as acceptability judgments do not differ between them. These 2 experiments also replicate the previously observed accuracy effect, whereby passives are more errorful in comprehension. The offline comprehension difficulty is considered to arise from a task bias on Working Memory demands rather than parsing or interpretation. Experiment 3 controls these demands through balancing the voice of the comprehension question and no difficulty of passivization is observed in accuracy. In line with prior acquisition work, we do observe an interaction between predicate type (state, event) and voice (active, passive) in accuracy judgments. Stative passives are more errorful than stative actives, but no (or less) difference is observed between eventive passives and actives. Acceptability judgments show a similar interaction in the collapsed data, although marginal. Passives with a stative predicate are temporarily ambiguous (verbal vs. adjectival passive) and require disambiguation to a less preferred interpretation (verbal). Stative passives have also been argued to require coercion of a state subsequent to an event, which could increase interpretation difficulty. These results argue that passivization difficulty arises from task artefacts and additional processing factors introduced by stative predicates, and run counter to mainstream theories that posit a role for noncanonical argument order.