This paper argues for the political urgency of the project of World Cinema, and an understanding of World Cinema as a dynamic totality. Totality here is not a generic, macroscopic lens, but a system that accounts for the co-existence of all cinemas as well as the uneven power relationships that determine the relative visibility or invisibility of cinemas in the global system. This structural inequity, a condition that underlies the differentiated cinematic flows, is also a methodological ruse in that it can only point to unequal relationships in discourses that define the current conceptions of World Cinema. An awareness of totality, we argue, makes it possible to return to films themselves as nodal points from which to begin the mapping of World Cinema through its complex networks of financing, distribution, and its circuits of legitimation (film festivals, academic discourses) which shape world cinema as a body of knowledge.

Chapter 1 Belonging to the Periphery of the Planet
Author: Bertrand Westphal

This chapter argues that literature and contemporary art can and do play an important decentering role in accounts of our culture and of how the world works. It challenges conventional attachments to single cultures and the notion of belonging as increasingly understood as belonging globally, contrasting the notion of the “global” with that of the “planetary”. It suggests that planetarity, as outlined in works such as The Planetary Turn by Elias and Moraru, is a desired way forward in order to achieve a balanced belonging rooted in environmental, decentered ethics and in aesthetics. Citing contemporary art-work such as the installations of Rirkrit Tiravanija, the “atlas” works of Brigitte Williams and the performance art of Guillermo Gómez Peña, the paper advocates an approach that favours the periphery rather than an all-invading Western-dominated centre. Such an approach serves to emphasize the contours of the world to the point where we can think the world as a single, immense periphery, thereby enabling us to see the “Other” as someone we can genuinely get to know. 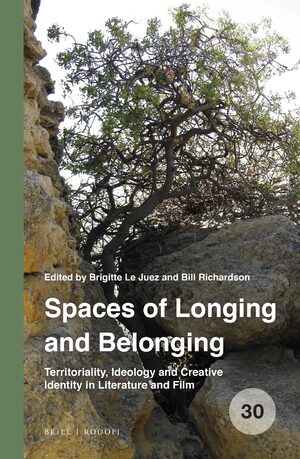 This essay explores diasporic space through the dual conception of filiation as both home and homeland (home/land) in Nimrod Bena Djangrang’s autobiographical L’Or des rivières (2010). Using the Glissantian notion of errantry as a movement of relationality, the essay frames Nimrod as an “errant” son – a diasporic subject who mediates between his lived experience of home (Chad) and host lands. It firstly examines the topos of return to the mother/land using the intimate chronology of Nimrod’s personal life (his mother) and the historical chronology of Chadian politics. The notion of “collusion” between home and host lands is further explored through the leitmotif of spatial and temporal disorientation. Lastly, the intersubjective narration of the death of Nimrod’s father and the temporal shifts of memory are used to analyze the re-membered father/land or topographies of relation. The essay illustrates that, by subverting a unitary conception of the home/land as space of origin and presenting a cycle of departure and return, L’Or des rivières frames diasporic subjectivity as relational and mobile – a dynamic temporal and spatial remapping of filiation.

Recent Finland-Swedish prose fiction frequently problematises not only the thematic of place but also the ways in which spatiality is depicted in fiction, which in turn raises specific questions regarding language-spaces and links to literary traditions. The triggers for this “spatial turn” in Finland-Swedish writing include its minority status and the affect of longing to belong, since these problematics include the territorial while interweaving actual, material as well as metaphorised territories. Using works by Bo Carpelan (1926–2011), Monika Fagerholm (b. 1961), Pirkko Lindberg (b. 1942), Sara Razai (b. 1979) and Johanna Holmström (b. 1981), this essay discusses contemporary Finland-Swedish literature as a minority literature and its in-betweenness by focusing on the affects of belonging and longing. We argue that recent Finland-Swedish prose fiction can be situated in the heterotopian space of in-betweenness consisting of diverse encounters, tensions and interruptions in relation to past traditions in literary expression. By focusing on the themes of multilingualism, spatial orientation and especially female characterisation, our readings also discuss belonging/longing in terms of inclusion and exclusion.

Space, time and intertextuality are Wole Soyinka’s critical literary tools. Torn between the Western and the African worlds, his symbolic protagonists play hero, villain and fool for audiences all too often unaware of Soyinka’s mythic complexity. In his plays, both the destructive and creative aspects of tradition and modernity are dramatized. Before we can think of choosing between past and present, we are forced to arbitrate between the positive and negative elements, first of earlier times, and then of contemporary life, and from this complex pattern of contradictions we are offered the chance to form a new vision. The ideologies of geographical space (of the West as well as Africa) have thus demanded Soyinka create protagonists who can answer to the prejudices of the times.

Chapter 6 The Longing of Lafcadio Hearn for His Own Japan
Author: Rodger Williamson

Upon landing in Yokohama in 1890, Lafcadio Hearn fell in love with the legends and folklore of Japan. He mostly ignored its modernization and current developments, choosing instead to praise and romanticize the aesthetic beauty and daily traditions of what he thought of as the much superior ethos of a Japan of the past in his writings as a correspondent, educator and novelist. Like W.B. Yeats who championed Irish culture, Hearn purposefully turned his attention to old beliefs, myths and traditions of the countryside, highlighting what he perceived as the true beauty of Japan. His love of what he saw as remarkable traits threatened by the encroachment of Western civilization and institutions was a recurrent theme in his many works and lectures. Hearn’s mission to find the essence of the Japanese spirit by investigating the indigenous roots of local cultures was much more than a journalistic assignment as it was motivated by his longing for a sense of identity that reawakens in the twilight of his life.

The aim of this essay is to analyze the myth of London as revisited in mid-nineteenth century American literature, focusing on the ambiguous figure found in Nathaniel Hawthorne’s Wakefield (1835) and the anonymous “man of the crowd” in Edgar Allan Poe’s eponymous tale (1840). Both characters represent the dilemmas of displacement, movement and alienation raised by the dissolution of the traditional paradigms of identity and, at the same time, the emergence of new social patterns. Poe’s “perfect stranger” does not belong anywhere; he is forced to move from one event to another, living in an eternal present with no connections to the past, while Hawthorne’s “outcast of the universe” acts like a post-modern tourist, choosing a self-imposed exile from his own home that lasts for twenty years. Thus, in different ways, the labyrinthine streets of London become, for the American authors, an existential metaphor, or rather the imaginary space where the modern subject experiences the estrangement of the familiar and the disturbing presence of Otherness.