This article discusses the concept of worlding in the cinema of Małgorzata Szumowska. Informed by philosophical theory of worlding and worldliness, by thinkers such as Martin Heidegger, Hannah Arendt, and Gayatri Spivak, and the film theory of cinematic worlds, proposed by Daniel Yacavone, the project examines the function of cinematic world building and its potential connection to World Cinema and feminist filmmaking. Close analysis of Szumowska’s film The Other Lamb (2019) traces the role of monstration and mise en scène in creating emancipatory cinema.

The essay explores how two women filmmakers, each deploying her unique vision through the perspective of a female protagonist, stage a transformative encounter with the act of bearing witness to genocide. The Diary of Diana B. (Dnevnik Diane Budisavljević, 2019, Croatia) directed by Dana Budisavljević, and Quo Vadis, Aida? (2020, Bosnia-Herzegovina), directed by Jasmila Žbanić, both compel us to bear witness to mass atrocities while avoiding the pitfalls of turning suffering into a spectacle, and by sidestepping the predictable cinematic conventions of redemption and closure, both formally and narratively. In my analysis of the films as anti-spectacles through the framework of Trinh T. Minh-ha’s ‘speaking nearby’, I argue for the concept of ‘women’s world cinema’, a kind of cinema that is made by women, speaks to women’s experiences, and/or addresses the spectator as female while also speaking nearby instead of about its subjects in ways that eschew conventional spectatorial alignments and co-optations of traumatic experience.

This article analyzes the work of Chloé Zhao and its reception in order to explore the role of female auteurs in 21st century world cinema. By comparing Zhao to Kelly Reichardt, another US director acclaimed internationally for distinctive works of US regional realism, the essay argues that US independent women directors critique American cultural hegemony and the global dominance of Hollywood both through the subject matter and formal structures of their films and through their positioning within the discourse of world cinema auteurism. After analyzing the authorial personae of both directors as constructed in their films and press reception, the essay offers close readings of Reichardt’s Certain Women and Zhao’s The Rider, both set in the US West, with specific attention to the perspectives of central Native American characters. The readings demonstrate how the filmmakers use realism to locate a singular, gendered authorial perspective on the world.

This chapter places Disraeli’s novel Venetia (1837) in the context of Britain in the 1830s, with particular emphasis on the political pressures of the period. The chapter identifies Venetia as a milestone text in Disraeli’s political and literary development, because it signifies a movement from Byronic vision to practical politics, underpinned by nominally benign but practically authoritarian, aristocratic government. Disraeli’s conservatism, under its tag of ‘one nation,’ is often seen as healing and unifying, but the chapter argues Venetia exposes another aspect of conservatism. The chapter also examines Disraeli’s political views as articulated in his non-fiction work of the period, specifically A Vindication of the English Constitution (1835), as well as examining the idea of the mob, comprising potentially riotous gatherings of lower-class people, a concept which is relevant to class-conflict in Venetia and the political climate in Britain in the wake of the French Revolution and the Great Reform Act. The chapter also relates Disraeli’s views to those of Thomas Carlyle, before evaluating Venetia’s importance in Disraeli’s literary output and emphasising the novel’s core position. Placing Venetia in the context of Disraeli’s work, and in the political and intellectual context of the period, illuminates Venetia and its interest as a significant literary text of the late-eighteen thirties. 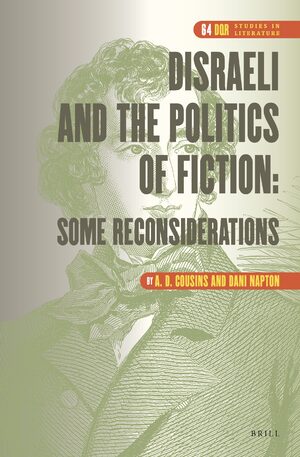 This chapter tackles the widespread assumption in scholarship that Disraeli was a racial rather than a religious thinker. It explores the race idea as it existed in nineteenth-century Britain, showing that the entire paradigm of ‘race’ arose in concurrence with wider debates over theology and scriptural interpretation in Britain and abroad. In writing about race in his fiction and non-fiction, Disraeli participated in a racial discourse that remained steeped in religious assumptions about individuals, peoples, and nations.

A brief consideration of the innate characteristics of personal letters, especially the direct and projected relationship between writer and recipient, defines the ways in which letters are directly and imaginatively autobiographical. By creating for the reader the effects of documentary immediacy and voyeuristic gratification, letters become the purest form of autobiography, one without the mediation of memory. The following analysis of Disraeli’s actual letters to his family and his political associates reveals not just the implications of their factual content, but also the imbedded fantasies shaping his ambitions. The relation of the letters to Disraeli’s other writings (novels, memoranda, journalism, biography, and speeches) is then explored, revealing a congruency between the political career and the fiction, as, for example, in the ways his conservative ideas in the 1830s shape the ideological basis of the Young England trilogy in the 1840s. Discussion of later letters, from the years of Disraeli’s political success, shows how powerfully his determination to cast his life as a romance shapes his relationship with Queen Victoria and the policies of his Governments, as well as his final novel, Endymion.