Clear All
Download Citations
Page:1234567891011 ...
Chapter 1 The Ages of Man and the Ages of Woman in Early Medieval England: From Bede to Byrhtferth of Ramsey and the Tractatus de quaternario
Author: Thijs Porck

This paper provides an overview of schematizations of the human life course found in Old English and Anglo-Latin texts. Patristic traditions of biblical exegesis and natural philosophy prompted early medieval English authors to divide human life into three to six ‘ages of man’, a flexible but uniform system of life course stratification in which three main phases (pueritia, iuuentus, senectus) could each be subdivided. The chapter also zooms in on an intriguing diagram in Cambridge, Gonville & Caius, MS 428/428, which uniquely visualizes four stages of life as women. This diagram and its accompanying text, the Tractatus de quaternario, have been ascribed to Byrhtferth of Ramsay. However, an exhaustive analysis of Byrhtferth’s writings, as well as a consideration of the diagram and text in their manuscript context, reveal that this attribution is unlikely. 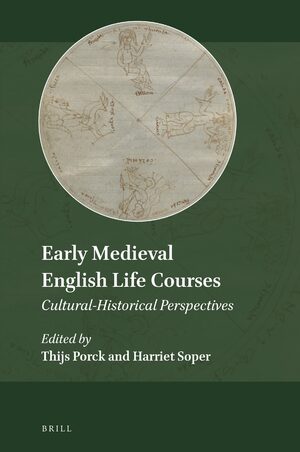 Historians have been skeptical when interpreting the Latin vocabulary associated with the life stages (gradus aetatis); scholarship has viewed medieval usage of terms like infantia, pueritia, adolescentia, and iuuentus as rarely adhering to the chronologically based categories defined by classical and late antique tradition. But did medieval authors always treat the life stages as a blur of overlapping phases? Alcuin of York (c.740–804) presents a unique case study for observing a more technical usage of the gradus aetatis. In his writings, Alcuin differentiates the early life stages with discernible precision, and he associates them with particular stages of educational and moral development. He links infantia with grammar, adolescentia with the liberal arts, and iuuentus with higher biblical instruction, productivity, and teaching. Though he sometimes uses the gradus aetatis figuratively, Alcuin did not view them as interchangeable. Historians should therefore not dismiss this vocabulary as equivocal, but rather interpret it carefully and in context.

This introduction poses a sequence of initial questions regarding the status of the life course in this period. How far do contemporary definitions of the life course respond to contextual demands? What is the interplay between the delineation of life stages and other elements of identity formation? What is the role played by intergenerational dynamics? Tackling such questions requires sensitivity to the nuances of generic context, linguistic distinctions, and historical contingency; it is only then that more sweeping conclusions about the contours of the early medieval English life course can be reached. The perceived shape of the life course can ultimately be found to reflect and inform countless contemporary issues of religion, law, medicine and literary expression. These dynamics come into focus with a new intensity when the life course is approached holistically, when life stages are considered against one another, and when diverse sources are placed adjacently, offering sometimes synchronous, sometimes jostling, views on their theme. This introduction thus ultimately contests that the cultural dimensions of the life course in this period, often striking in their diversity, together offer a promising new field of research.

Chapter 11 From Field to Feast: The Life (and Afterlife) Course of Cereal Crops in Early Medieval England
Author: Debby Banham

Cereal crops were fundamental not only to the diet of early medieval England, but also to its working life. Their life cycle structured the year for majority of the working population, from preparing the soil, through sowing and weeding to harvest. Their afterlife also absorbed a substantial amount of labor, in threshing, grinding flour and making bread, and it was as bread that they reached their apotheosis as the living body of the Lord. This article traces how these processes, common to most of Christian Europe until within living memory, played out in particular in early medieval England, and the role they played in the beliefs of the population.

This afterword considers the implications of the papers in this volume for osteoarchaeologial and archaeological studies of age and aging. It suggests that many offer cautionary tales for the archaeologist who approaches age as a series of categories, without adequately considering its contextual and complex nature. In addition, it suggests that using concepts relating to early medieval understandings of the body such as gecynd and mægen may offer productive new ways of understanding the life course for osteoarchaeologists and archaeologists.

This chapter examines Old English obstetric remedies to argue that across the early medieval English period, pregnancy was considered to constitute a separate stage in the female life cycle, which overlaps with but is fundamentally distinct from both wifehood and motherhood. The ‘pregnancy stage’ in the life course is marked by its vulnerability and marginality, its distance from the other stages of adult female development, its increased proximity to death, and a conceptual elision of woman and fetus. These remedies are contextualized by a discussion of the Old English medical texts, which, it is argued, exhibit a male bias. The chapter then turns to the archaeological record, arguing that women and neonates who died in labour or shortly afterwards were interred in such a way as to blur the identities of mother and child, before offering close readings of five obstetric remedies, including Metrical Charm 6.

The theoretical concept of “The Cultural Biography of Things” is explained and its value discussed in relation to artefacts of the Anglo-Saxon/Anglo-Norman period. Contrasting case studies presented of textiles – the Orkney Hood and the Bayeux Tapestry – and items of metalwork – the Sutton Hoo hanging bowl and shield. The value of scientific and palaeographical approaches to manuscripts are discussed with special attention to research on the DNA of the York Gospels, the prolonged making of MS Harley 603 and the Anglo-Saxon practice of glossing, annotating and adding to existing manuscripts. Acknowledging the interest of the objects’ “afterlives” as well as their manufacture, use, repair and re-use in early medieval times, the article demonstrates the importance of the approach as a way into social history and the motivation of human beings.

Chapter 8 Moving on from ‘the Milk of Simpler Teaching’: Weaning and Religious Education in Early Medieval England
Author: Katherine Cross

Weaning – the process by which a child moves from complete reliance on milk to eating an adult diet – is a period of social transition as well as a crucial moment for an individual’s health and development. This chapter presents a historical examination of written sources from the eighth and ninth centuries to complement recent archaeological analysis investigating infant feeding practices in early medieval England. Bede developed a metaphor of the weaning process in his exegesis of the Song of Songs, and then applied it to the conversion of pagans in his Historia ecclesiastica. Bede departs from his sources in emphasizing the gradual nature of weaning – and thus of conversion. References to weaning in the hagiography of missionary saints allude to the biblical model of Hannah and Samuel. They present weaning as associated with the transfer of parental responsibility from mother to father, and the beginning of a child’s education.

Personal names are an intrinsic part of the human life course. The bestowing of a name on a child at birth inducts them into a society and gives them a social identity. But naming is more than just a one-off act. Names form a crucial part of an individual’s identity throughout their life, as well as how they are remembered after their death. They are changed, adapted or added to as people pass through the phases of their lives, often specifically identifying a person’s age or life stage. This chapter examines personal names to gain a better understanding of how people in early medieval England chose names for their children, and the meaning they held. It will show how they could be transformed, added to or changed completely throughout the life course, and how they were forgotten, preserved or reapplied after death.

This chapter reveals the ways in which the early medieval English Church presented the process of puberty. Whilst there is not enough surviving evidence to capture a complete picture of the views of the Church, let alone the lay population, incidental references from a variety of sources allow us to glean some of the ideas which were in circulation, even if they are largely confined to individual authors. To identify and analyze references to puberty in Anglo-Saxon sources, this chapter begins with an outline of modern scientific research about pubescent growth. With an understanding that puberty encompasses both physical and cognitive developments established, it then moves forward to investigate how religious authors crafted pubertal developments into a critical process which shaped the spiritual lives of both young men and women.