This chapter is rooted in a conviction that the responsibility of a social scientist is to perceive vanishing, endangered cultures, and to warn of their disappearance by shining light on the significance, as well as the consequences of a shrinking cultural pluralism in the world. Ethnic minorities exist everywhere. Their minority status is officially recognized or not, but the latter situation means a lack of institutional guarantees of their cultural, linguistic, and structural distinctions. Sometimes minorities fade to barely a relic, no longer attempting to gain minority status; the members no longer view their identity in ethnic, but rather in merely local categories. A problem faced today by the members of one such group—the Romance-language inhabitants of the Balkan Peninsula—is the preservation of some form of their identity. For the purposes of this work, the geography will be limited to today’s Greece, Serbia, and the Istrian Peninsula—areas in which various situations and types of identity strategies are most clearly manifested by this minority. 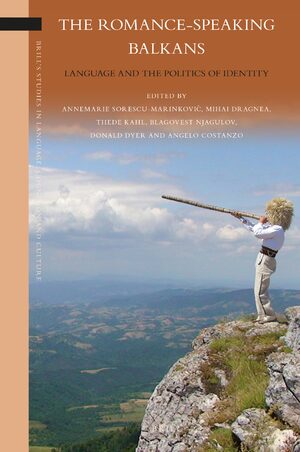 The use of the Hebrew alphabet in Aljamiado (Hebrew consonant script, but not in Hebrew language) is the natural result of its validity as a sacred alphabet, which—together with lexical, morphological and syntactic Hebraisms—gives non-Hebrew languages an open Jewish appearance. It functions as a cultureme, as a distinctive feature of its relevance to Judaism, as a symbol of an ethnic-religious Jewish community. Until the end of the XIX century, printed Judeospanish texts were predominantly in Hebrew characters called rashi (rabbinic semi-cursive), while manuscripts were written in a flowing cursive script known as solitreo. Around the turn of the XX century, more and more Sephardim in Bulgaria shifted from using the cursive form of Hebrew (solitreo) to being written in Cyrillic alphabet. The Cyrillic alphabet was used for notes and letters, and later increasingly used in printing, especially for religious writings. Today Judeospanish is written in the Latin alphabet and spelt phonetically. The present chapter focuses on the languages of the Bulgarian Sephardim (Judeospanish, Hebrew, Bulgarian) and their writing systems (Rashi, solitreo, Cyrillic and Latin).

Chapter 5 Identity Constructions among the Members of the Aromanian Community in the Korçë Area
Author: Daniela-Carmen Stoica

The present chapter discusses the use of oral histories as a key methodological tool in linguistic and dialectal research, and as a crucial part of historical documentation concerning the politics of identity of the Aromanians (rrămăńi) living in Albania. It draws mainly on the empirical experience of the author, who has carried out research mainly in Korçë, an area of complex linguistic contacts (Albanian-Macedonian-Greek). The researcher has recorded a number of oral histories in one of the varieties of the Aromanian dialect: the Farsherot variety spoken in Korçë area. This variety is in danger of becoming extinct due to the cultural and linguistic assimilation of the Aromanians living in Albania.

Until recently, the Balkan Romance-speaking populations colonized in the Banat region has not been the subject of historical, linguistic, ethnologic or anthropologic research. Their neglect both by the demographical statistics of the Yugoslav communist authorities and by the public opinion, the cultural stakeholders, the school authorities and the mass-media led to an almost complete disappearance of speakers of Romance varieties other than Romanian on this territory. In this chapter, I discuss some aspects regarding the colonization and the identity of the Megleno-Romanians living in the village Gudurica (Serbian Banat). The history of this population in this territory can be traced to colonization from North Macedonia (particularly the village Huma, close to Gevgelija), that started in 1946 as part of ample colonization activities initiated by the Yugoslav communist authorities. The 17 Megleno-Romanian families colonized at that time have either gone back to their homeland a few years later, or have been completely assimilated in the following decades and are now a hidden minority in the Banat region.

This paper examines the disparity between the conceptions of identity embraced by the linguistic minority speaking Vlashki/Zheyanski or Istro-Romanian, residing in Istria, Croatia, and those held or promoted by the concerned nation-states, Romania and Croatia. While the linguistic minority, well integrated into the local Istrian Croatian society, embraces complex and multilayered identities, where local ethnic and regional identities are complementary to a non-primordial national identity, both states are proponents of a nationalist ideology, where a distinct community language is understood as a sign of a distinct national identity. Romanian Law No. 299/2007 is discussed to illustrate the attitude of the Romanian state. By this law, communities speaking Vlashki/Zheyanski, like other minorities speaking languages related to Romanian, are identified as ‘Romanians everywhere,’ regardless of their self-identification. The Croatian state’s attitude is exemplified by the extent of the state’s legal protection for the Vlashki/Zheyanski language established on the basis of the European Charter of Regional and Minority Languages. The current Croatian position is that this protection must remain limited due to the fact that the Vlashki/Zheyanski-speaking linguistic minority does not have a status of an officially recognized national minority. It is concluded that the two states disregard the minoritized group’s self-identification and language rights and, due to their primordialist attitudes toward identity, curtail the possibility of a more sustainable protection of the group’s endangered language.

This chapter analyzes the processes through which Vlach Romanian, a non-dominant variety of Romanian spoken mainly in Eastern Serbia, becomes enregistered on the “Vlasi na kvadrat” Facebook page and comes to convey social identity related to place and characterological persona (being a Vla (squared)/Vlauca/Vlaurda from Eastern Serbia). Through metapragmatic practices (such as “talk about talk” and stylization), the community created around the “Vlasi na kvadrat” Facebook page reconfigures certain forms and features of Vlach Romanian, which become recognized as such and adopted to project authenticity, perform Vlach-ness and construct local identity online. Two salient linguistic features of Vlach Romanian (the suffix -ešće and the phonological neutralization of /ʈʂ/ and /ʨ/) are discussed.

The chapter approaches issues of language and the politics of identity resorting mainly to theoretical frameworks and empirical studies developed in social psychology and political psychology. The chapter examines the consequences of political terror on various dimensions of cultural identity in the case of the Aromanians during the time period 1945–1989. As language is considered an essential component of ethnolinguistic vitality, which enhances the solidarity of a community over time, space, and ideological and political repression, a common feature of authoritarian regimes is to repress ethnolinguistic identity and to induce forced cultural and religious dis-identification. In the case of the Aromanians, such pressures, in addition to the internal language policies of each country, are rooted in a structural and ideological condition that has hindered in a systemic way their linguistic and cultural identity. The structural and ideological condition includes a series of major restrictions that reduced drastically the freedom of people, thought, expression, exchange of information, and economic and cultural goods across borders. These restrictions have had a direct influence on family relations, cultural practices, and studying and practicing the mother tongue, among others. This chapter considers the influence of such restrictions on different generations of people who have migrated during various historical periods.

The Republic of Moldova has a very high emigration rate, with Italy being the second preferred destination country for circular and permanent migration, after the Russian Federation. As a consequence, Italian has become part of the ‘linguistic relations’ on a national scale in the Republic of Moldova. Contact phenomena involving Italian are today subject to normative and purist discourses on language use in Moldova. Moreover, Italian has become accessible even to immobile speakers who have never lived in Italy. This chapter offers an overview of the different roles of Italian in Moldova as the language of a historical minority, as a foreign language learned at school and the university, as a language of migration, and as an important resource on the labor market. It also presents an overview of lexical, syntactic and prosodic examples of language contact and “translanguaging” in the capital Chişinău. On a more general and theoretical level, the practice of Italian in Moldova points to a pressing but under-researched topic in the sociolinguistics of migration: linguistic relations in spaces of emigration and return migration are sociolinguistically affected by mobility.

Chapter 8 “What Language Do We Speak?” The Bayash in the Balkans and Mother Tongue Education
Author: Annemarie Sorescu-Marinković

The Bayash are an ethnic group of the Balkans originating in the Romanian Principalities of Wallachia and Moldova. They are considered Roma by the majority populations, though they do not speak Romani, but only Romanian, and their original occupation used to be woodwork. Based on contemporary sources and fieldwork in Balkan Bayash communities, this chapter shows how the initiatives and efforts to introduce the mother tongue of the Bayash in the educational system are preceded by a process of ideological clarification. One of the main findings is that ideological clarification of the Bayash in Europe, as regards the language they speak, took different directions in different countries, as there is no transborder consensus on this issue. Language ideology is examined in its specific correlation with the bottom-up language management and with language standardization practices present in a number of countries. The chapter sums up information about Bayash schooling in their mother tongue in the Balkan countries where they live.