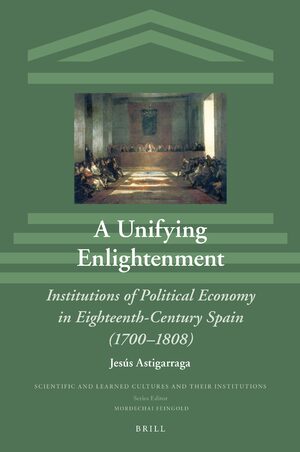 Interest in the study of dictionaries and encyclopaedias and their role in the processes of formulating, adapting and spreading economic ideas has increased in recent years. A study of this kind is a response to the encyclopaedist movement’s enormous influence on modern European cultural history. This chapter describes the worthwhile and successful efforts to create dictionaries of commerce and political economy during the Spanish Enlightenment. It provides a detailed analysis of the content of the main encyclopaedic works in Spain, which were devised by authors such as Tomás Marien Arróspide, Eugenio Larruga, Juan Bautista Virio, Gerónimo Suárez, Vicente Alcalá Galiano and Diego Gallard. These works were produced between 1723–1730, the period that saw the publication of the Savary des Bruslons brothers’ Dictionnaire, and 1784–1788, when the century’s last dictionaries in these disciplines were published as part of the Encyclopédie Méthodique. Although the eighteenth century dictionaries of commerce were an essential component of the intense “dialogue on political economy” that took place in the European Enlightenment, there were more dark periods than light during their history in Spain.

In July 1789, while France was being shaken by revolutionary events, the press in neighbouring Spain was showing unmistakable signs of enjoying tremendous vitality. Although it would not be long before news from Paris dealt a body blow to the Spanish Enlightenment, the press continued to cultivate the fertile exuberance that it displayed during its “golden age”. In the late 1780s its importance could be measured in both quantitative and qualitative terms: not only had newspapers and journals multiplied at Court and in the provinces but they had become a key piece in the new domain of the public sphere. During these years some of them not only supported the language and ideas that had preceded the revolutionary events in France, but they also emerged as a new form of political communication in which political economy continued to take pride of place. From a position that was reasonably far away from power, these periodicals became a crucial factor for shaping public opinion in Spain. In Enlightenment Spain the two main symbols of this new critical journalism, bursting with economic content and protagonists in the opening up of a new channel for intervening in political life with the aim of shaping “the tribunal” of public opinion, were El Correo de Madrid o de los ciegos and the Espíritu de los mejores diarios literarios. This chapter is dedicated to the study of their content.

This chapter reconstructs the history of trade consulates and economic societies in Spain during the eighteenth century. The role that these two institutions played in decentralising the enlightened programme is emphasized and their work in popularising and spreading economic and agronomic knowledge via various formats (reports the press, dialogues, booklets, etc.) is reviewed, all of which confirms that they acted as “incubators” of public “space” and “opinion”. Their relative openness to participation, equal treatment of different social classes, regular discussion of typical topics related to enlightened culture and spreading of new ideas all enabled these institutions to accommodate new forms of sociability and new cultural dynamics and practices -which were pre-political in some ways-. These institutions therefore became genuine schools for future “citizens”, who were distinguishable from “subjects” in terms of political criticism, freedom of expression and ideological diversity. In short, they fostered a high level of participation in public life among the socio-political elite, and one of their basic functions was to expand the public sphere in Spain by attracting new audiences for their publications, among which agronomy and political economy occupied a privileged place. Indeed, without their pioneering experience it is impossible to understand the set of political and cultural dynamics that opened up Spain’s constitutional path, which culminated in the Cortes of Cádiz.

The Peninsula War (1808–1814) and the Cortes of Cadiz (1801–1814) represented a real turning point in the history of Spain and the Enlightenment itself. Spain’s early nineteenth century constitutional experiences were in fact wrought by authorities, intellectuals and reformers that had been the architects of the Enlightenment’s development during the preceding decades. In the new context created by the War they spread their principles through the press, propaganda and the other expressions of culture and political activism that emerged during the conflict, while also transferring these principles to parliamentary debates and the articles of the Bayonne (1808) and Cadiz (1812) constitutional charters. These fathers of early Spanish constitutionalism were not only connected to the economic institutions discussed in this book: they were their real creators on all fronts. They founded or participated in institutions aimed at fostering economic growth, such as the economic societies and trade consulates; they promoted new entities whose purpose was to modernise the country’s economic management —the Board of Trade, the Bank of San Carlos and the Department of General Development for the Country—; they established pioneering university chairs in political economy and commerce; and, finally, in the print culture sphere, they were behind the blossoming of the press and the first dictionaries and teaching materials covering commerce and economics. In short, thanks to them, Spain built an institutionalised economic culture, of which there had been very few signs at the beginning of the eighteenth century and which continued into the constitutional period. Spain’s first constitutional era cannot be interpreted without analysing the mark left by both political economy and its institutions on the main actors.

Chapter 2 Graef’s Discursos Mercuriales (1752–1756) and the Origins of the Economics Press in Spain
Author: Jesús Astigarraga

Juan Enrique Graef’s Mercurial Discourses (1752–1756) occupy a prominent place in the history of Spanish Enlightenment journalism. The publication’s unquestionable pioneering nature is clearly present in both structural and content aspects. This chapter mainly analyses the economic thought reflected in the Mercurial Discourses with the aim of evaluating its role in the process by which political economy emerged in the Spanish Enlightenment. The chapter shows that the publication was essentially a version of a French journal entitled Journal Oeconomique and reflected the French journal’s economic content, related to traditional Oikonomia or Oeconomie. However, Graef’s initiative also reflected a number of pioneering ideas on the “science of commerce” that was taking shape in France around the Gournay´s circle. Graef was the first Spanish Enlightenment author to recognise that “commerce” had become a science that was governed by its own rules, and he strongly defended its adaptation to circumstances in Spain. Regarding these ideas, Graef’s debt to authors like François Véron de Forbonnais or Jean Rousset de Missy is notable.

Chapter 6 In support of the Enligthened Reforms
Author: Jesús Astigarraga

In 1781 the journalist Luis García Cañuelo began publishing one of eighteenth-century Spain’s most emblematic periodicals: El Censor. This marked the beginning of the “golden age” of Spanish press, which lasted, with a few ups and downs, until 1808. The exponential growth in the number of newspapers during this period was matched by the improvement in their quality and duration. Taking this background into account, this chapter has three main aims: first, to discuss the reasons why the Spanish press reached this stage of maturity; second, to examine the different channels through which political economy was introduced into journals throughout the “golden age”; and, finally, to provide an in-depth study of the Memorial Literario (1784–1808), one of the most distinguished newspapers of eighteenth century Spain. The Memorial Literario was edited by Joaquín Ezquerra and played an important role in spreading Enlightenment culture, including political economy, for a quarter of a century. Through different formats such as articles, letters, translations and reviews, the publication played a pioneering role in the introduction on a regular basis of information about political economy into the Spanish press of the day. An in-depth analysis of its content shows that the strategy of introducing political economy-related content was guided not by an exclusionary criterion but by the aim of publicising and defending the reform programme implemented by Bourbon governments since the 1760s.

Political economy was an essential component of the changes ushered in by the Enlightenment; changes that were both technological and institutional, and that together gave rise to the modern concept of economic growth. Changes of this nature logically required the creation of a new set of institutions. Institutionalised economic culture was one more expression of the Enlightenment´s intellectual movement, and in Spain’s case it was largely prompted from abroad. This is the case of the economic institutions that blossomed there and that they are the object of study of this book: the economic societies; government bodies dealing with economic and commercial issues like the Board of Trade, the trade consulates and the statistics agency; educational institutions such as the political economy and commerce chairs; and, finally, in the print culture sphere, magazines with economic content —whether specialised or not—, merchants’ handbooks, teaching materials and political economy and commerce dictionaries. All these institutions were the outcome of a process of acclimatising foreign experiences to the Spanish context, which is why it is so important to analyse the sequence linking: the international circulation of Enlightenment ideas, their acclimatisation to Spain and their conversion into institutions. At the same time, and beyond the rucial role played by political economy in both the circulating and institutionalisation of Enlightenment culture, this book also explores its role in structuring the state. All over Europe this was constructed through the imposition of royal sovereignty on increasingly broad and unified spaces and institutions. Political economy played a crucial role in the process of political unification and articulation undergone by the Spanish monarchy, which culminated in a constitutional culture.

At the beginning of the 18th century merchants’ handbooks were the main manifestation of the existence of an institutionalised economic culture in Spain. This chapter systematically reconstructs the genealogy of this type of books during the period from 1699 to 1759 and shows that Spain made a frequently forgotten but not insignificant contribution to this international print culture movement. The chapter also analyses the main merchants’ handbooks of the day (Corachán, Bordázar, etc.) as well as reviewing the legacy handed down to the eighteenth century by sixteenth and seventeenth century Spanish commercial arithmetic -especially that rooted in Castile and Aragon- and studies the different formats taken by these handbooks (accounting books, treatises on metal assaying, etc.). In general terms it can be said that the Spanish merchants’ handbooks published during these six decades were collections of rudimentary and stale knowledge about mathematics and economics. However, outside the intellectual history context, they had considerable social and cultural significance and proliferated because in a Monarchy like Spain there was no clear alternative to them that was capable of fulfilling several cultural, social and professional functions.

Carlos III’s arrival on the Spanish throne in 1759 was a turning point in the production of merchants’ handbooks. The second of the two chapters dedicated to the history of these idiosyncratic books analyses their production between 1760 and 1808. The chapter begins with an overview which presents a quantitative analysis of the number of manuals published, where they appeared, and their authors’ professional backgrounds, among other issues. The strengthening of merchants’ handbooks’ local genealogies from 1760 to 1790 is also studied. Although particular attention is paid to their publication in regions such as Aragon, Catalonia, Valencia and Andalusia, significant space is dedicated to the modernisation process undergone by Spanish commercial culture that took place from 1790 to 1808, covering mathematician Gerónimo Bails’ pioneer trade handbook, the training of merchants led by the Correo Mercantil (1792–1808) and the purpose of drafting a code of commerce. This modernising process culminated with the creation of the first chairs of commerce in the history of Spain, an issue that closes the chapter.