This afterword builds on the various contributions to the volume and reflects on the ways in which the notion of “perspectivism” introduced by Amazonian anthropologist Viveiros de Castro may contribute to the historiography of cultural encounters in the early modern era. The discussion suggests bringing America back into the picture, in particular, in sixteenth century discussions on religion and idolatry and on the cannibal customs of the sixteenth-century Tupinamba from the Brazilian coast. Cannibalism is also here used as a metaphor for cultural imperialism, seeking to complicate the West vs. the rest narrative by considering how “alien eyes” informed European intellectual history, from Montaigne to Lévi-Strauss. 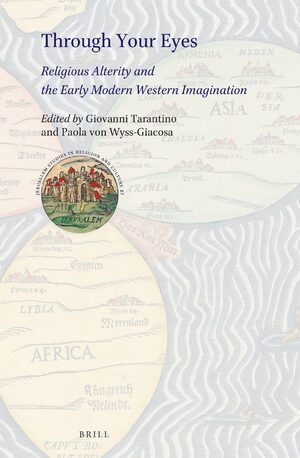 Indirectly responding to Heinz Schilling’s question about Judaism’s place in the confessionalisation of early modern Europe, this chapter episodically surveys the role of creed in Jewish culture from the twelfth through eighteenth centuries. It suggests that medieval formulations of principles of belief were responses to crises and designed to affirm the place of crypto-Jews within the Jewish fold. The uncharacteristic separation of belief and practice, with a privileging of the former, is explained as a development unique to Iberian conversos and their Jewish descendants in the lands of the Western Sephardic Diaspora. In Napoleonic times, members of this last group played a pivotal role in maneuvering Judaism into the category of religion.

Chapter 9 From Labelling and Ridicule to Understanding: The Novelty of Bernard and Picart’s Religious Comparatism
Author: Giovanni Tarantino

During the European Enlightenment, an over-contrived emphasis on priestly analogies between different religious traditions might have set the scene for religious indifferentism or, indeed, for powerful rhetorics of intolerance. For example, Thomas Gordon’s gambit, an attempt to use satirically mediating religious prophesies to profane salvation and promote tolerance, backfired. His language of stereotyping and caricature, so immediate for an illiterate public, finally resulted in a demonization of the Jews. In contrast, the illustrated volumes of the Cérémonies et coutumes religieuses de tous les peuples du monde (translated into English by Voltaire’s accomplished translator John Lockman) highlight the culturally specific differences between various religious traditions and, for the most part, depict them respectfully. In this way, the reductive oversimplifications capable of fostering caricature as an expression of intolerance are vividly checked and countered.

As a consequence of the growing amount of information about the manners and customs of Siam, between the end of the seventeenth and the beginnings of the eighteenth century, a philosophical debate developed, mainly concerning religion. The essay focuses on three cases, that is the reference to Siamese religion in Bayle’s writings, the comparative approach in the Cerémonies religieuses by Bernard and Picart, and the deistic interpretation of Siamese religion in d’Argens work. These examples are proposed in order to show the variety of the heterodox attitudes towards non-Christian religions as evidence to demonstrate the difficulties of considering a “radical” philosophic perspective as a uniform and consistent framework.

Chapter 5 The Religious Other as Perceived by the Chinese and by Early Western Missionaries
Author: Paul A. Rule

Missionary activity presents unique problems for theories of alterity. By definition the missionary is attempting not only to introduce something new to the “other” society but to present it in a way that makes the new acceptable. Early modern missionaries in China are a useful test-case for examining how cross-cultural exchange occurs. It cannot be simply a matter of misunderstanding or deception and, certainly not, of material advantage. Conversion implies change but change may be development as well as rejection. Western humanism and theological developments provided a conceptual armory well exploited by the Jesuit missionaries and appreciated by the “Confucian Christians”.

The focus of Through Your Eyes is the (mostly Western) understanding, representation and self-critical appropriation of the ‘religious other’ between the sixteenth and eighteenth centuries. Mutually constitutive processes of selfing/othering are observed through the lens of creedal Jews, a bhakti Brahmin, a widely translated Morisco historian, a collector of Western and Eastern singularia, Christian missionaries in Asia, critical converts, toleration theorists, and freethinkers, in other words by people dwelling in an ‘in-between’ space which undermines any binary conception of the Self and the Other. The volume had its genesis in exchanges between eight international scholars and the two editors, intellectual historian Giovanni Tarantino and anthropologist Paola von Wyss-Giacosa, who share an interest in comparatism, debates over toleration, and history of emotions.

The Granadan Morisco, physician, translator and forger Miguel de Luna was the author of the Historia verdadera del rey d. Rodrigo, first published in Granada in 1592 and 1600. The Historia verdadera was the pretended translation of an invented Arabic chronicle on the Muslim conquest of Spain in the eigth century. This paper analyzes the editorial success of this book through the study of its translations into French, Italian and English. The ambiguity of Luna’s book explains how it could be used, appropriated and understood in different political, cultural or historical contexts.

This essay compares two dialogic texts in Marāṭhī from the late sixteenth and early seventeenth centuries: the bhakti sant Eknāth’s Hiṇdu-Turk Saṁvād [Hindi-Muslim Conversation] and the English Jesuit Thomas Stephens’ Discurso sobre a vinda de Jesu Christo [Discourse on the Coming of Jesus Christ], popularly known as the Krisṭapurāṇa. The former text is attributed to a Brahmin who spent much of his life in the heartland of the Marāṭhī cultural universe, while the latter was authored by a well-travelled European missionary who wrote the first Christian purāṇa from the margins of the Marāṭhī cultural universe in Portuguese Goa. By considering the ways in which these roughly coeval texts stage inter-religious dialogue within the Marāṭhī literary universe and considering Stephens’ work in light of the history of accommodatio, this chapter considers how silence in religious debates may and may not be read as signs of the tolerance of religious difference.

Most eighteenth-century native African authors portray their physical enslavement as more than compensated for by the exposure it gave them to the spiritual freedom Christian salvation offered. That exposure gave them the means, motive and authority to bear witness to and evangelize their faith. Like Moses, the archetypal Judeo-Christian “stranger in a strange land”, these early black authors sought to lead an exodus of their people from slavery. Also like Moses, being strangers in strange lands, none lived to enter the temporal Promised Land where all people of African descent would be free.

Chapter 4 Through the Eyes of Idolatry: Pignoria’s 1615 Argument on the Conformità of Idols from the West and East Indies with Egyptian Gods
Author: Paola von Wyss-Giacosa

In 1615, the Paduan antiquary Lorenzo Pignoria (1571–1631) published a revised edition of Cartari’s Le vere e nove imagini de gli dei delli antichi. He added a new part on the diffusion of idolatry to the Americas and Asia, basing his Egyptogenetic argument on objects and images as evidence. This systematically illustrated treatise represents an innovative attempt at historical research into the origins of religious worship. A close reading of the text and study of the engravings’ genesis lay open not only their richness and complexity, but also their intriguing contradictions. The antiquary concurrently employed different explanatory models to make sense of religious alterity on the basis of material evidence. The chapter discusses Pignoria’s comparative method and particularly the intellectual and emotional challenges posed by his use of conformità as a heuristic tool for dealing with the collected sources.