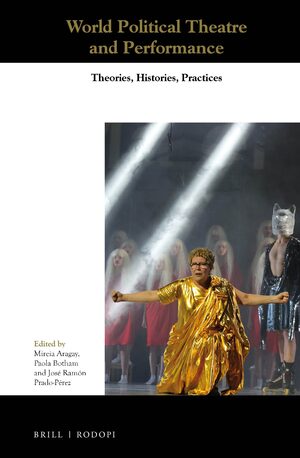 As part of local Labor Day celebrations in the Turkish city of Eskişehir, union workers utilized a desolate film-set replica of Istanbul’s iconic Taksim Square to stage their protest against the ban on entering Taksim on such a resonant date. This essay explores the performance aspects of this event, held from 2013 to 2015, enquiring about the power of space to promote social and political activism by mimicking both an actual place (Taksim Square) and a fictional space of rehearsal and production (a theatre stage). Following Scott Magelssen’s theory of simming, the chapter analyses the processes of meaning-making and the emancipatory dimension of the episode, understood as an upcycled relic of capitalist cultural production. Despite the progressive nature of the event, which suggested the empowering potential to construct social places from excess cultural products, the Turkish working class rejected that novel expressive experience and returned to the former institutional celebrations.

From Revolution to Dissent: A Case Study of the Changing Role of Theatre and Activism in Bengal
Author: Pujya Ghosh

The Naxalbari Movement and the period of Emergency (1960-1970) generated a cultural impulse which framed the idea of ‘the political’ for the Left movement in Bengal, exerting a strong influence on forms of political action up to the present times. From this standpoint, the chapter focuses on two prominent, committed Bengali playwrights, Utpal Dutt and Debesh Chattopadhyay, to address the question of the artist’s position as a performer and an activist – individually and collectively. In the form of a performative conversation between Japen Da, the protagonist of Utpal Dutt’s Japen Da Japen Ja, and Paltu Da, a very similar character created by Debesh Chattopadhyay in Paltu Da Bolen Ja, the chapter confronts the playwrights’ theories about theatre with some of their own productions in order to establish what it means to be a committed left-wing activist-performer in Bengal.

Yael Farber’s 2013 play Nirbhaya was devised in response to the incident in December 2012, when a young woman was gang-raped on a bus in Delhi. Emotionally draining for both the performers and the audience, the show inevitably elicits strong, often tearful reactions. Correspondingly, the Belarus Free Theatre’s play Trash Cuisine (2012), exploring state violence and genocide, culminates in a scene that attempts to force tears from the audience by means of the aggressive use of an external provocation. However, can a reaction to the atrocities represented in these works be anything more than visceral? In order to be genuine, it should be deliberate – yet in some cases, the only acceptable reaction may have to be a forced response. In the context of emotional manipulation, witnessing, grief and excessive public mourning, the focus of this chapter is the ultimately ethical question of what it means to make the audience cry.

Meeting in the Theatre to Think towards Social and Political Change
Author: Andy Smith

In this chapter, Andy Smith outlines a practice that he refers to as ‘dematerialised theatre’. After examining historical influences and antecedents from the realm of conceptual art, he contextualises the practice as emerging in and from what Zygmunt Bauman described as an era of ‘liquid modernity’. Using the solo works all that is solid melts into air (2011) and commonwealth (2012) as illustrations, he then reflects on how the methodological approaches of the practice and the meeting between performance and audience they encourage have provided him with a sound foundation to explore and create work that thinks towards social and political change. The final half of the essay outlines five key characteristics of the practice in an attempt to foster forward movement and wider reflection.

This chapter addresses a wave of political theatre that was crushed by the authorities in 1920s post-Civil War Finland. In a context where the international Proletkult or Proletarian Culture movement stressed the radical democratic character of cultural production, theatre in Finland offered possibilities for political activism on the one hand and for therapeutic facing of trauma on the other. The chapter introduces three Finnish working-class playwrights, Uuno Kekäläinen, Verneri Jokiruoho and Kaarlo Valli, who wrote drama based on their own experiences – and the collective experiences of the working class – during the Civil War. Their revolutionary melodramas bore witness to the trauma of White terror and stressed the idea of commemoration as political action. In the struggle over memory, the Red counter-narrative was considered provocative and interpreted as revolutionary and communist. Between 1922 and 1924, the hegemonic White authorities reacted harshly and criminalized these plays, thus crushing the rising proletarian theatre movement.