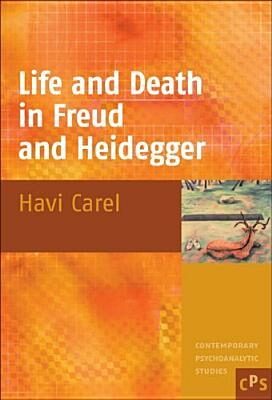 Life and Death in Freud and Heidegger
Series: Contemporary Psychoanalytic Studies, Volume: 6
Author: Havi Carel
Life and Death in Freud and Heidegger argues that mortality is a fundamental structuring element in human life. The ordinary view of life and death regards them as dichotomous and separate. This book explains why this view is unsatisfactory and presents a new model of the relationship between life and death that sees them as interlinked. Using Heidegger’s concept of being towards death and Freud’s notion of the death drive, it demonstrates the extensive influence death has on everyday life and gives an account of its structural and existential significance. By bringing the two perspectives together, this book presents a reading of death that establishes its significance for life, creates a meeting point for philosophical and psychoanalytical perspectives, and examines the problems and strengths of each. It then puts forth a unified view, based on the strengths of each position and overcoming the problems of each. Finally, it works out the ethical consequences of this view. This volume is of interest for philosophers, mental health practitioners and those working in the field of death studies.
Paperback

Re-ethnicizing the Minds?
Cultural Revival in Contemporary Thought
Series: Studien zur interkulturellen Philosophie / Studies in Intercultural Philosophy / Études de philosophie interculturelle, Volume: 17
Editors: Thorsten Botz-Bornstein and Jürgen Hengelbrock
The predominance and global expansion of homogenizing modes of production, consumption and information risks alienating non-Western and Western people alike from the intellectual and moral resources embedded in their own distinctive cultural traditions. In reaction to the erosion of traditional cultures and civilizations, we seem to be witnessing the re-emergence of a tendency to “re-ethnicize the mind” through renewed and more or less systematic cultural revivals worldwide (e.g., “hinduization,” “ivoirization,” “sinofication,” “islamicization,” “indigenization,” etc.). How do and should philosophers understand and assess the significance and impact of this phenomenon? Authors acquainted with the contemporary situation in Africa, Asia, the Middle-East, South-America, and Europe try to answer this question.
In the final analysis, the authors of this original and groundbreaking collection of essays plead for a full critical engagement with one’s own particularity while at the same time rejecting any form of cultural, national or regional chauvinism. They consider various ways in which local and global conceptions as well as practices can and already do judiciously inform and positively fertilize each other. At this juncture of history, they argue, societies and peoples must articulate their self-identity by looking critically at their respective cultural resources, and beyond them at the same time.
Hardback 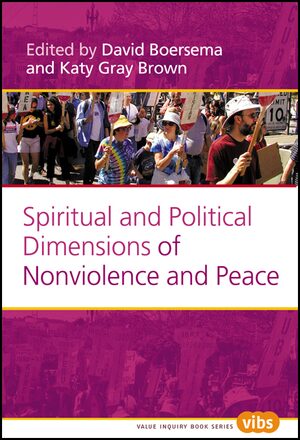 Spiritual and Political Dimensions of Nonviolence and Peace
Series: Value Inquiry Book Series, Volume: 182and Philosophy of Peace, Volume: 182
Editors: David Boersema and Katy Gray Brown
This book is a collection of philosophical papers that explores theoretical and practical aspects and implications of nonviolence as a means of establishing peace. The papers range from spiritual and political dimensions of nonviolence to issues of justice and values and proposals for action and change.
Paperback

Minding Evil
Explorations of Human Iniquity
Series: At the Interface / Probing the Boundaries, Volume: 23
Editor: Margaret Sönser Breen
Minding Evil: Explorations of Human Iniquity brings together fifteen essays, versions of which were presented at the Fifth International Conference on Evil and Wickedness, held in Prague in 2004. The volume examines evil and wickedness from a variety of disciplines, including criminology, cultural studies, gender studies, law, literature, peace studies, philosophy, psychology, and sociology. In so doing Minding Evil keeps in play the doubled meaning of its title: on the one hand, to tend to evil, that is, to oversee, cultivate, and deploy it; on the other hand, to be bothered by evil and so, in learning to identify or recognise it, to try to understand its workings and thus contain or control it and, perhaps, repair or undo it. While the essays taken together work to show the difficulty and at times the travesty of not being able to distinguish between the two meanings, it is this second meaning that remains key. What are the individual and collective responsibilities entailed in minding - being troubled by - evil? This is the central question of this volume.
Paperback

Poverty
A Philosophical Approach
Series: Rodopi Philosophical Studies, Volume: 6
Author: Paulette Dieterlen
In Poverty: a philosophical approach, the author studies various philosophical issues concerning poverty in the Program for Education, Health and Food (PROGRESA) that was in effect in Mexico, from 1997 to 2002, and shows how theoretical discussion is necessary to clarify some ideas concerning the application of a social policy. Poverty is one of the main problems concerning economics, political philosophy, and ethics. It is an ethical problem because of its relationship with self-esteem. Since poverty is intimately related to social policies, the philosophy of poverty must consider the distribution criteria used to attend to people in situations of extreme poverty. This would involve attention to their needs, preferences, capabilities and “well-being” rights. The book considers social policies applied to poverty, and their occasional abuse of utilitarian instruments. Many are implemented without considering cultural differences, including varying patterns of conduct in diverse communities. Equality also matters. Since poverty and inequality are not the same, the study of the latter allows us to target groups found in the lowest levels of “the playing field”.
Paperback

Textual Ethos Studies, or: Locating Ethics
Series: Critical Studies, Volume: 26and Critical Studies, Volume: 26
Editors: Anna Fahraeus and AnnKatrin Jonsson
What is the relationship between texts and ethics? Who decides the ethics of a text, the writer or the reader? What happens to ethics in texts that portray dreams or psychoses? Is violence always inherently unethical? In dealing with others is violence to both them and oneself ever completely avoidable?
Textual Ethos Studies does not attempt to provide definitive answers to these questions so much as to be a springboard to the further discussion of ethics in relation to specific texts. The essays illustrate varying perspectives — ranging from the philosophical to the psychoanalytical to the linguistic — that can be used to localize how texts engage or invite an engagement with ethics.
Twenty scholars representing Asia, Europe, Israel, North America, and South Africa highlight the complex relationship between cultural context and ethics, and between the ethical and the unethical. Several essays deal with the study of atypical texts that represent different attitudes toward the violent, the disordered, the traumatized, the psychotic, and the sentimental in order to encourage — or provoke — further discussion of the relevance of these types of texts to ethics.
E-Book

Being and Authenticity
Series: Value Inquiry Book Series, Volume: 149
Author: Xunwu Chen
This book presents a creative approach to the problem of individual authenticity. What is authenticity? What are its necessary conditions? How is an authentic self possible in society? What are the relationships of authenticity, morality, and happiness? The book examines a wide range of questions in Eastern and Western thought, to which it gives novel answers.
Paperback

Civil Society, Religion, and the Nation
Modernization in Intercultural Context: Russia, Japan, Turkey
Series: Studien zur interkulturellen Philosophie / Studies in Intercultural Philosophy / Études de philosophie interculturelle, Volume: 14
Editors: Gerrit Steunebrink and Evert van der Zweerde
Japan, Russia, and Turkey are major examples of countries with different ethnic, religious, and cultural background that embarked on the path of modernization without having been colonized by a Western country. In all three cases, national consciousness has played a significant role in this context. The project of Modernity is obviously of European origin, but is it essentially European? Does modernization imply loss of a country’s cultural or national identity? If so, what is the “fate” of the modernization process in these cases? The presence of the idea and reality of civil society can be considered a real marker of Modernity in this respect, because it presupposes the development of liberalism, individualism and human rights. But are these compatible with nationalism and with the idea of a national religion?
These questions are the more pressing, as Japan is considered part of the Western world in many respects, and Russia and Turkey are defining their relation to the European Union in different ways. An investigation of these three countries, set off against more general reflections, sheds light on the possibilities or limitations of modernization n a non-European context.
Paperback