The Exemplary Hercules from the Renaissance to the Enlightenment and Beyond
Series: Metaforms, Volume: 20
Editors: Valerie Mainz and Emma Stafford
The Exemplary Hercules explores the reception of the ancient Greek hero Herakles – the Roman Hercules – in European culture from the Renaissance to the Enlightenment and beyond. Each chapter considers a particular work or theme in detail, raising questions about the hero’s role as model of the princely ruler, and examining how the worthiness of this exemplary type came, in time, to be subverted. The volume is one of four to be published in the Metaforms series examining the extraordinarily persistent figuring of Herakles-Hercules in western culture up to the present day, drawing together scholars from a range of disciplines to offer a unique insight into the hero’s perennial, but changingly problematic, appeal.
E-Book

Abraham Ibn Ezra Latinus on Elections and Interrogations
A Parallel Latin-English Critical Edition of Liber Electionum, Liber Interrogationum, and Tractatus Particulares. Abraham Ibn Ezra’s Astrological Writings, Volume 7
Series: Études sur le judaïsme médiéval, Volume: 83
Editor: Shlomo Sela
As a result of Abraham Ibn Ezra’s increasing popularity after his death, there were repeated waves of translation of collections of his Hebrew astrological treatises into Latin and into the emerging European vernaculars. A study of these versions affords us a golden opportunity to shed light on a significant missing link in our knowledge of Ibn Ezra’s astrological oeuvre. The present volume offers the first critical edition, accompanied by an English translation, a commentary, and an introductory study, of three Latin texts on the astrological doctrines of elections and interrogations, written by or attributed to Abraham Ibn Ezra: the Liber electionum, the Liber interrogationum, and the Tractatus particulares.
E-Book

A Companion to Byzantine Epistolography
Series: Brill's Companions to the Byzantine World, Volume: 7
Editor: Alexander Riehle
A Companion to Byzantine Epistolography introduces and contextualizes the culture of Byzantine letter-writing from various socio-historical, material and literary angles. While this culture was long regarded as an ivory-tower pastime of intellectual elites, the eighteen essays in this volume, authored by leading experts in the field, show that epistolography had a vital presence in many areas of Byzantine society, literature and art. The chapters offer discussions of different types of letters and intersections with non-epistolary genres, their social functions as media of communication and performance, their representations in visual and narrative genres, and their uses in modern scholarship. The volume thus contributes to a more nuanced understanding of letter-writing in the Byzantine Empire and beyond.

The Lyon Terence
Its Tradition and Legacy
Series: Drama and Theatre in Early Modern Europe, Volume: 11
Authors: Giulia Torello-Hill and Andrew J. Turner
In The Lyon Terence Giulia Torello-Hill and Andrew J. Turner take an unprecedented interdisciplinary approach to map out the influence of Late-Antique and Medieval commentary and iconographic traditions over this seminal edition of the plays of Terence, published in Lyon in 1493, and examine its legacy. The work had a profound impact on the way Terence’s plays were read and understood throughout the sixteenth century, but its influence has been poorly recognised in modern scholarship. The authors establish the pivotal role that this book, and its editor Badius, played in the revitalisation of the theoretical understanding of Classical comedy and in the revival of the plays of Terence that foreshadowed the establishment of early modern theatre in Italy and France.
E-Book

Public Space in the Late Antique City (2 vols.)
PART 1: Streets, Processions, Fora, Agorai, Macella, Shops. PART 2: Sites, Buildings, Dates
Series: Late Antique Archaeology (Supplementary Series), Volume: 5
Author: Luke Lavan
This book investigates the nature of 'public space' in Mediterranean cities, A.D. 284-650, meaning places where it was impossible to avoid meeting people from all parts of society, whether different religious confessions or social groups. The first volume considers the architectural form and everyday functions of streets, fora / agorai, market buildings, and shops, including a study of processions and everyday street life. The second volume analyses archaeological evidence for the construction, repair, use, and abandonment of these urban spaces, based on standardised principles of phasing and dating. The conclusions provide insights into the urban environment of Constantinople, an assessment of urban institutions and citizenship, and a consideration of the impact of Christianity on civic life at this time.
E-Book

Aëtiana V (4 vols.)
An Edition of the Reconstructed Text of the Placita with a Commentary and a Collection of Related Texts
Series: Philosophia Antiqua, Volume: 153
Editors: Jaap Mansfeld and David Runia
A new reconstruction and text of the Placita of Aëtius (ca. 50 CE), accompanied by a full commentary and an extensive collection of related texts. This compendium, arguably the most important doxographical text to survive from antiquity, is known through the intensive use made of it by authors in later antiquity and beyond. Covering the entire field of natural philosophy, it has long been mined as a source of information about ancient philosophers and their views. It now receives a thorough analysis as a remarkable work in its own right. This volume is the culmination of a five-volume set of studies on Aëtius (1996–2020): Aëtiana I (ISBN: 9789004105805, 1996), II (Parts 1&2; set ISBN 9789004172067; 2008), III (ISBN 9789004180413; 2009), IV (ISBN: 9789004361454, 2018), and V (Parts 1-4). It uses an innovative methodology to replace the seminal edition of Hermann Diels (1879).
E-Book

A Companion to Boniface
Series: Brill's Companions to the Christian Tradition, Volume: 92
Editors: Michel Aaij and Shannon Godlove
The eighth-century English missionary and church reformer Boniface was a highly influential figure in early medieval Europe. His career in modern-day Germany, France, and the Netherlands is attested in an exceptional number of textual sources: a correspondence of over 150 letters, Latin poetry, church council records, and other documents. Numerous saints’ lives and modern devotional materials further reveal how he was remembered by the religious communities that claim him as a foundational figure.

This volume comprises the latest scholarship on Boniface and his fellow missionaries, examining the written materials associated with Boniface, his impacts on the regions of Europe where he worked (Hessia, Thuringia, Bavaria, Frisia, and Francia), and the development of his cult in the Middle Ages and today. 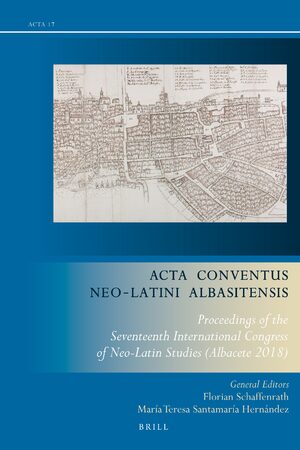 Acta Conventus Neo-Latini Albasitensis
Proceedings of the Seventeenth International Congress of Neo-Latin Studies (Albacete 2018)
Series: Acta Conventus Neo-Latini, Volume: 17
Editors: Florian Schaffenrath and María Teresa Santamaría Hernández
Every third year, the members of the International Association for Neo-Latin Studies (IANLS) assemble for a week-long conference. Over the years, this event has evolved into the largest single conference in the field of Neo-Latin studies. The papers presented at these conferences offer, then, a general overview of the current status of Neo-Latin research; its current trends, popular topics, and methodologies. In 2018, the members of IANLS gathered for a conference in Albacete (Spain) on the theme of “Humanity and Nature: Arts and Sciences in Neo-Latin Literature”. This volume presents the conference’s papers which were submitted after the event and which have undergone a peer-review process. The papers deal with a broad range of fields, including literature, history, philology, and religious studies.
E-Book