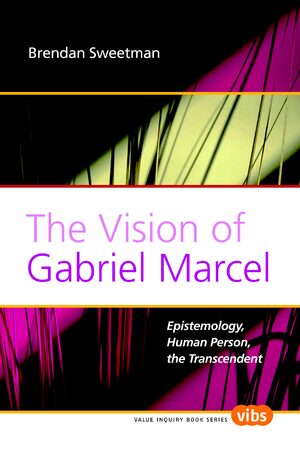 The Vision of Gabriel Marcel
Epistemology, Human Person, the Transcendent
Series: Value Inquiry Book Series, Volume: 193and Philosophy and Religion, Volume: 193
Author: Brendan Sweetman
This book illustrates the profound implications of Gabriel Marcel’s unique existentialist approach to epistemology not only for traditional themes in his work concerning ethics and the transcendent, but also for epistemological issues, concerning the objectivity of knowledge, the problem of skepticism, and the nature of non-conceptual knowledge, among others. There are also chapters of dialogue with philosophers, Jacques Maritain and Martin Buber. In focusing on these themes, the book makes a distinctive contribution to the literature on Marcel.
E-Book

Holy Scriptures in Judaism, Christianity and Islam
Hermeneutics, Values and Society
Series: Currents of Encounter, Volume: 12
Editors: Hendrik M. Vroom and Jerald D. Gort
One of the prime issues that needs to be addressed in dialogical encounter between the three monotheistic faiths of the world is that concerning the authority and interpretation of Holy Writ, since Jews, Christians and Muslims alike consider their Scriptures to be divine revelation. It is incumbent upon each of these religions to apprise itself of the hermeneutical approach employed by the others in ascribing current meaning to ancient scriptural texts. This is not only important as a means for the enhancement of inter-religious understanding but is also of great interest to society at large. What role does the Jewish Bible, the Christian Bible, and the Qu'ran play in the thinking and the lives of contemporary Jews, Christians, and Muslims? How are these Holy Scriptures interpreted in terms of present-day circumstances? How much room do the three religions allow for bringing their basic messages and biblical-theological traditions into rapport with constantly changing social, political and economic conditions? Is the concept of hermeneutical space acceptable to these religions? If so, in what sense and at what level? Is it possible to identify the scopus of a text and then reconstitute it textually, as it were, in light of the social and ethical questions thrown up by new contextual developments? Can interpretive adjustments be made without jeopardizing the core message of the text involved? And do the three monotheistic religions stand open to one another for influence in this regard? Has one or another of them taken hermeneutical cues from the others? Is there room for mutual learning within the hermeneutical space mentioned above or is this a sacred space closed to all influence from other traditions? These are among the central questions raised and dealt with in this interreligious collection of essays, perhaps the only dialogical symposium to date to deal exclusively with the doctrine and hermeneutics of Holy Scripture in Judaism, Christianity, and Islam.
Paperback