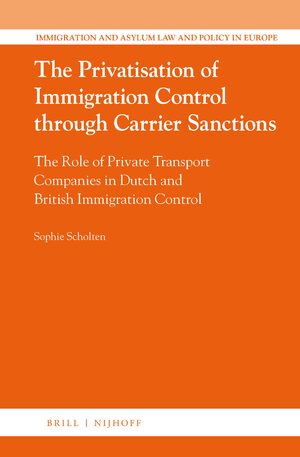 The Privatisation of Immigration Control through Carrier Sanctions
The Role of Private Transport Companies in Dutch and British Immigration Control
Series: Immigration and Asylum Law and Policy in Europe, Volume: 38
Author: Sophie Scholten
The central theoretical question of The Privatisation of Immigration Control through Carrier Sanctions concerns the social working of legal rules. Sophie Scholten examines how states, private companies (carriers) and people (passengers) have become interconnected through carrier sanctions legislation.
Scholten describes the legal framework in the Netherlands and the UK and international and European legislative rules developed on the subject. The author ties in with debates on privatisation of control in general and of immigration control in particular. As such the author provides a much needed new look at a field which as not attracted detailed academic attention. Scholten opens up fascinating questions about the relationship of the public and private sectors in the complex and politically sensitive area of immigration.