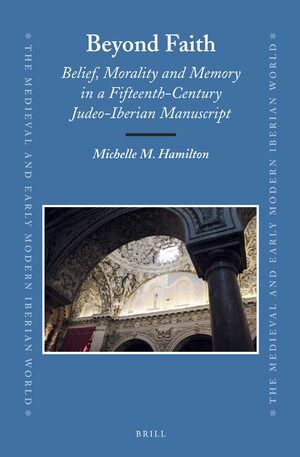 Beyond Faith: Belief, Morality and Memory in a Fifteenth-Century Judeo-Iberian Manuscript
Series: The Medieval and Early Modern Iberian World, Volume: 57
Author: Michelle M. Hamilton
In Beyond Faith: Belief, Morality and Memory in a Fifteenth-Century Judeo-Iberian Manuscript, Michelle M. Hamilton sheds light on the concerns of Jewish and converso readers of the generation before the Expulsion. Using a mid-fifteenth-century collection of Iberian vernacular literary, philosophical and religious texts (MS Parm. 2666) recorded in Hebrew characters as a lens, Hamilton explores how its compiler or compilers were forging a particular form of personal, individual religious belief, based not only on the Judeo-Andalusi philosophical tradition of medieval Iberia, but also on the Latinate humanism of late 14th and early 15th-century Europe. The form/s such expressions take reveal the contingent and specific engagement of learned Iberian Jews and conversos with the larger Iberian, European and Arab Mediterranean cultures of the 15th-century.
E-Book