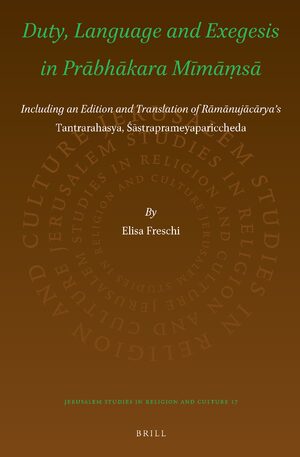 Duty, Language and Exegesis in Prābhākara Mīmāṃsā
Including an edition and translation of Rāmānujācārya’s Tantrarahasya, Śāstraprameyapariccheda
Series: Jerusalem Studies in Religion and Culture, Volume: 17
Author: Elisa Freschi
The book is an introduction to key concepts of Indian Philosophy, seen from the perspective of one of its most influential schools, the Prābhākara Mīmāṃsā, which flourished from the 7th until the 20th c. AD. The book includes the critical edition and translation of Rāmānujācārya's Śāstraprameyapariccheda, which is part of his Tantrarahasya (written in South India, after the 14th c.). This text has never been translated before and it is one of the clearest elaboration of the Prābhākara thought.

The book particularly aims at presenting the linguistic, deontic-ethic, hermeneutic and epistemo-logical thought of the Prābhākara Mīmāṃsā. Detailed glossary and indexes make it possible to use the book as a reference-tool for Indian philosophy and linguistics.