After a South African air raid attack against the liberation-struggling independence movement of their parents, more than four hundred young Namibian refugees—preschoolers, primary school pupils and teenagers—arrived in the German Democratic Republic in 1979. This chapter evaluates representations of the deportation of the children and their experiences in the GDR by looking at (auto)biographical depictions. With regard to the question of whether their spectacular life stories have (co-)shaped the prevailing post-independence national narrative of Namibia or not, their own perspective yields both an unambiguous and, given the conditions under which they had been sent on their odyssey in the first place, surprising result. While the former exile children have ultimately been denied the privilege of being part of the country’s elite, they do not seem to resent their near invisibility in these self-images of the nation, and seem to have come to terms with their situation (and identity) as Africans with a German past.

This article analyses representative life stories that reflect the experiences of people who participated in the Namibian liberation struggle, as well as one narrative that reflects the traumatic effect of the brutal murder of her mother witnessed by a five year old girl. The stories detail the vicious nature of settler colonialism in South West Africa and the motive that drove youths to abscond from school to join SWAPO camps in neighbouring countries. Two of the male authored texts focus on the political dimensions of the struggle, with minimal personal details; the two accounts penned by women who obtained secondary and tertiary education in exile and underwent military training foreground the personal dimension that is understated in the male accounts. The human side of war, suffering and discrimination is captured in all the accounts, in differing degrees. The strong Christian beliefs of the selected authors are a striking feature in most of the life stories.

In the South African War (1899–1902), Boer women emerged as more heroic than their men folk. When Boer leaders succumbed to a truce, much discursive work ensued to domesticate Boer women anew in the face of their recalcitrance in accepting a peace deal with the British. But attempts to re-feminise Boer women and elevate Boer men to their ‘rightful’ position as patriarchs faltered in the topsy-turvy after the war. The figure of the volksmoeder, or mother of the nation, provided a nodal category that combined feminine care for the family and the volk, or fledgling Afrikaner nation, but the heroic narrative was increasingly displaced by the symbol of self-sacrificial, silent and passive motherhood, thereby obscuring women’s political activism. Today, a re-remembering of volksmoeder heroism, combined with feminist politics based on the democratic-era Constitution, opens up possibilities of Afrikaners breaking out of their white exclusivism to join the nascent democratic South African nation.

The Herero Nama Genocide is a painful period in Namibian history and yet it is the period about which several novels have been written in the past ten years. This article examines one of the novels of this period, The Lie of the Land by Jasper Utley, with a view to exploring the ambivalence in its writing. Using witness bearing and the concept of the ‘Other’ in postcolonialism, I investigate the narrator’s language and lay bare the ambiguities in the novel. I trace the path of the eponymous hero from being a witness to the Nama Genocide to an active involvement in the rescue of a Nama woman whom he falls in love with.

‘Why don’t you let me flow in my space?’
Author: Hugh Ellis

The practice of performance or ‘spoken word’ poetry has gained a significant foothold among the youth in urban Namibia in the last two decades. While this poetry has been put to many socio-political uses, one of the main ones has been a protest against patriarchal elements in Namibian society and culture, and an outcry against Namibia’s high rates of gender-based violence. Patriarchal aspects of Namibia’s national culture are often explicitly linked to violence and to the intersectional nature of oppression. Spoken word poetry has also often given LGBT+ women a space to speak out against their oppression and to normalise their existence. This article shows how women performers have used and modified the conventions of poetry and song to get this challenging—in the Namibian context often radical—message across. The paper argues that poetry in this context has the potential to approximate a localised ‘public sphere’ where inclusive discourse can be held around social issues—bearing mind that people are not excluded from this discourse because of arbitrary reasons such as gender or sexuality.

In this article I read several recently published novels that attempt to write the early 20th century Namibian experience of colonial war and genocide. Mari Serebrov’s Mama Namibia, Lauri Kubuitsile’s The Scattering and Jaspar Utley’s The Lie of the Land set out to write the genocide and its aftermath. Serebrov and Kubuitsile do so expressly from the perspective of survivors; their main characters are young Herero women who live through war and genocide. This sets Mama Namibia and The Scattering apart from the earlier literature, which—despite an enormous divergence of political and aesthetic outlooks—tended to be written from the perspective of German male protagonists. The Lie of the Land, too, scores new territory in postcolonial literature. I read these recent works of fiction against an oral history-based biography, in which a Namibian author, Uazuvara Katjivena, narrates the story of his grandmother who survived the genocide. 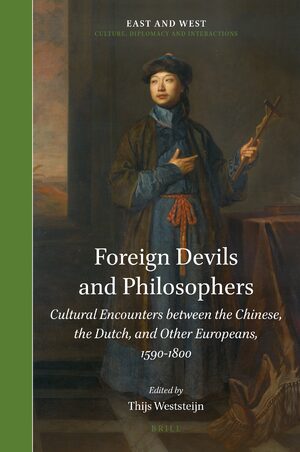 Foreign Devils and Philosophers
Cultural Encounters between the Chinese, the Dutch, and Other Europeans, 1590-1800
Series: East and West, Volume: 6
Editor: Thijs Weststeijn
What was the cultural impact of early meetings between Chinese and Europeans? This book explores visual, literary, and scholarly representations of the Celestial Empire and Western countries against the backdrop of actual encounters. Based on rare Chinese and, correspondingly, European (especially Dutch) sources and archival documents, the volume covers a range of cultural expressions from the applied arts to philosophy. Special attention goes to the ideals and realities of trade and diplomacy of the Dutch East India Company in China. Foreign Devils and Philosophers approaches global history from a cultural perspective and illuminates the reciprocal dynamic of aversion and admiration: Chinese and Westerners could appear as sages or savages in each other’s eyes.
E-Book 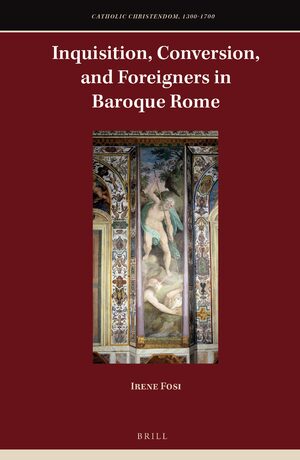 Inquisition, Conversion, and Foreigners in Baroque Rome
Series: Catholic Christendom, 1300-1700
Author: Irene Fosi
In Rome, where strategies to re-establish Roman Catholic orthodoxy were formulated, the problem of how to deal with foreigners and particularly with ‘heretics’ coming from Northern Europe was an important priority throughout the early modern period. Converting foreigners had a special significance for the Papacy. This volume, which includes several case studies, explores the meaning of conversion and the changes of policy adopted by the church bodies set up to protect orthodoxy. It uses inquisitorial documents (from Archivio della Congregazione per la dottrina della Fede) and sources from other archives and libraries, both in Rome and elsewhere. The book includes an updated bibliography with a particular attention paid to anglophone historiography.
E-Book

In: Inquisition, Conversion, and Foreigners in Baroque Rome

In: Inquisition, Conversion, and Foreigners in Baroque Rome